‘The Great North’: Coming Out Doesn’t Have to Be Dramatic

For writer Charlie Kelly, May 8th’s episode, about Ham wanting to redo his ‘being gay’ announcement to elicit a more ‘theatrical’ reaction, shows that the unconditional love of family, however uneventful, makes for the best ‘reveal’ anyone could ask for. 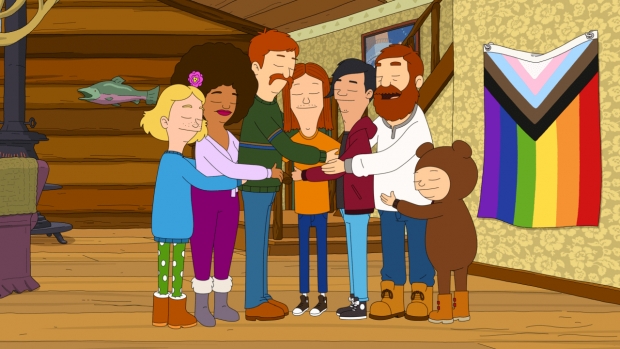 FOX’s latest eclectic family animation, The Great North, follows the domestic life of single dad Beef Tobin and his kids Judy, Wolf, Ham, and Moon as the crew braves the wilderness of Alaska. The series - executive produced by Bob’s Burgers’ Loren Bouchard, Wendy Molyneux, and Lizzie Molyneux-Logelin – first aired back in May of 2021 and is now in its second season.

The Great North’s upcoming episode “Say It Again, Ham Adventure,” which airs on FOX Sunday, May 8, centers around Ham wanting to redo his coming out moment. While he’s announced he’s gay to the family on multiple occasions, each time met with love and total acceptance, Ham desires a more dramatic reaction and seeks help making his theatrical dreams come true.

“It's such a hilarious moment in that first episode,” remembers Charlie Kelly, one of the show’s writers, who also voices the series’ character Drama John. “You think Ham's going to have this big dramatic coming out, and then his brother tells him that they all already know he's gay, because he's mentioned it like a bunch of times, and that they love him just the way he is! I just love that scene. It got me thinking about why Ham has come out so many times - that he was looking for some drama from the moment and never got it; drama he was taught to expect by all the dramatic coming out stories we see in movies and on TV.” The anticlimactic coming out experience overshadowed by cinema’s often unrealistic, overly dramatic portrayals of these moments is something Kelly himself experienced when he was in his teens.

“The first time I ever told anyone I was gay, I was 13 and had rented Brokeback Mountain from my local public library - in bald violation of their R-rated rental policy,” Kelly shares. “After the first love-making scene, I paused the film, sashayed into my living room, and just sort of said it. The experience was pretty anticlimactic and when I went back to finish the movie I was, uh, pretty bummed out? It's a movie that ends with a murder by tire iron and where both characters face lifelong persecution for just being who they are and, well, overall, it wasn't the warmest welcome to the gay community.”

Kelly says films like Brokeback Mountain conditioned him to expect a big, dramatic struggle from being gay and from coming out, something Ham goes through in Sunday's episode when he and his boyfriend Crispin watch a movie about a racecar driver that causes crashes and pileups on the racetrack by announcing that he’s gay. There are confetti, fireworks, a proposal, dramatic music, and romantic kiss, to which Ham responds, “It’s never like that in real life. In real life, you just tell your family, and they’re like, ‘That’s great, love ya.’ And then you go back to removing the elderly bear that dropped dead on your property.”

Of course, this doesn’t stop Ham from wanting his own dramatic moment and going on a pretty hair-raising quest to get his shining reveal, only to realize, after a near-death experience, that the unconditional love of his family made for the best coming out story he could ask for.

“An uneventful coming out is a pretty good one,” says Kelly. “We really tried to subvert and have fun with the expectations of a ‘coming out’ episode with this Sunday's story, and I'm really proud of what we made! I hope that people realize how much their families can mean to queer people who are going through it. And I hope that everyone is able to see how much the Tobin family really loves one another, and that it leaves people feeling good and grateful for the people in their own lives. I also hope they laugh. If they're not laughing, we really didn't do our jobs.” From the beginning, Kelly says The Great North has been a show that captures the best of what a family can be. It’s a prevalent theme in many of FOX’s family-centered animated series, from The Simpsons in the 1980s to the more recent Duncanville.

“I think there's such a genuine feeling of love between our characters, and I also get that feeling from Bob's and a lot of other animated shows,” says Kelly. “I think sometimes on these animated sitcoms you're seeing a kind of utopic version of a family unit. Not that our family or any of these families are ‘perfect,’ whatever that means. I mean, Kathleen Tobin, the mom of our family, walked out on them. But we get to see families where the members are really present for each other and spend a lot of time together and really show up for each other. There's something about that that I find pretty irresistible.”

The Great North also offered writers like Kelly the chance to present both an authentic and positive queer experience during a time where film and television still often rely heavily on well-established tropes, though they’re based on unfortunately painful realities.

“So many of the queer stories we have are built on tropes of bullying, shame, family estrangement, sickness and other tough parts of the queer experience and, unfortunately, those aspects of a queer life are still so present, and those stories are so important,” notes Kelly. “For me, though, it's really special to be a part of something where we get to show another, more hopeful, optimistic outlook on queerness. For my first meeting on the show, I got to watch a ‘presentation’ version of the pilot and knew instantly that this was something I wanted to be a part of. I don't think I'd ever seen such well-rounded and positive representation of gay teenhood, and definitely not in adult animation.” Kelly hopes the episodes also serves as an encouragement and comfort to other kids and adults who either already have or are planning to come out to their families.

“It doesn't have to be dramatic or traumatic -- none of the 'atics,” he explains. “It might be, it could be, and if it is, you'll get through it. It's a cliche, but it really does get better. Usually, a lot better! But don't get lost in the expectation that coming out has to be some huge, challenging moment. Think about Ham's journey. It might end up really being ‘no big deal’ to the people who surround you. And you'll be a lot happier once you're telling the full truth about who you are.”

Kelly adds, “I love that we get to tell gay stories of consequence, but without consequences. And after watching a season or so of these shows, you sometimes feel like you're a part of these families. I think that's a really satisfying part of animated sitcoms and also why they're just so fun to write for. I get to go to work every day and genuinely feel like in some small way, by making people feel good, we're actually making a difference in this world. And that's awesome. I'll be grateful for that for the rest of my life.”