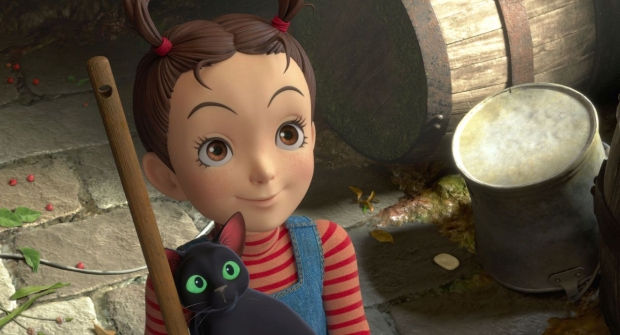 In a 2014 interview with Studio Ghibli’s famed co-founder and Oscar-winning director, Hayao Miyazaki, for the release of his film, The Wind Rises, I asked if big animation studios were taking enough risks in their storytelling. The director shared that animation studios should stay small, modest in size, so they can survive making fewer films. He even ventured that Studio Ghibli had possibly grown too big; as they started using computers, the number of employees grew, which meant they had to make more films to afford the expansion. When asked if he ever considered working in 3D/CG now that the studio was computerizing, he said, “I can only create animation in 2D. There is no other choice for me. I don’t even know how to use a Smartphone.”

Fast-forward to 2021 and Studio Ghibli has moved way past cellphone technology to produce their first fully 3D/CG feature film, Earwig and the Witch, released yesterday by GKIDS and Fathom Events in select U.S. theatres and debuting tomorrow, February 5, on HBO Max, the U.S. streaming home to the studio’s vast feature film catalog, including hugely successful films like Spirited Away, My Neighbor Totoro, and Princess Mononoke, among dozens of classic titles.

Earwig and the Witch, based Diana Wynne’s children’s book of the same name, is directed by Goro Miyazaki (From Up on Poppy Hill, Tales from Earthsea), Hayao Miyazaki’s son. No pressure there. The film is produced by studio co-founder Toshio Suzuki, with planning from the elder Miyazaki. Not sure exactly what the entailed, but we’ll go with it.

The film stars a young girl, Earwig, who grew up in an orphanage in the British countryside having no idea her mother had magical powers. Her life changes dramatically when a strange couple takes her in, and she is forced to live with a selfish witch. As the headstrong young girl sets out to uncover the secrets of her new guardians, she discovers a world of spells and potions, and a mysterious song that may be the key to finding the family she has always wanted.

Have a look at the trailer:

Was Studio Ghibli’s move away from hand-drawn 2D inevitable? Having already co-produced a cel shaded 3D TV series that Goro Miyazaki directed, the International Emmy Award-winning Ronja, the Robber’s Daughter, the studio seemed ready to embrace a move to 3D/CG features. Some fans weren’t necessarily thrilled with Earwig’s early reveals, unable to accept the idea of a 3D/CG Studio Ghibli film. But the overall response has been generally positive. And let’s be honest… even the most critically acclaimed Studio Ghibli films, huge moneymakers in Japan, have had a hard time at the U.S. box office. And, as they say, you can’t please everybody.

Wanting to try new approaches to filmmaking within the context of what path the studio’s future production plans may take, Goro Miyazaki, with his father and Suzuki’s support, decided it was time to move on from hand-drawn 2D.  And what better way to keep your father, the master of hand-drawn 2D animated feature film production, from getting too involved in your film than to produce it with using techniques and a technology pipeline completely foreign to him.

The Earwig and the Witch director and possible Studio Ghibli heir apparent recently spoke to AWN, with the help of a translator, about his new film, the move to 3D/CG, and working in the shadow of one of animation’s most prolific filmmaking talents. Dan Sarto: Studio Ghibli doesn’t make too many films. What made you and the studio choose to make Earwig and the Witch?

Goro Miyazaki: It started when Hayao Miyazaki and Toshio Suzuki came to me and suggested that I read this book and make a film adaptation. So, I read the story and I really enjoyed it. What I liked so much about the story was that the protagonist, Earwig, wasn't your typical good girl. Sometimes, the heroine in animation can be your stereotypical clean, correct, and beautiful female. But she was nothing like that. She sometimes does things that really upset the grownups. So, I loved the fact that the story centered around this different type of heroine.

DS: How difficult was it adapting a book into a 90-minute animated film? It’s not easy distilling down that amount of written narrative into a compelling movie.

GM: I agree. Most of the time when you’re adapting a book into a film, especially when it's a long, epic story, you must consider how you can squeeze it all into a 90-100-minute animated story. In the early days, when I first started working in animation, Hayao Miyazaki told me that the most you could squeeze into animation is a story that goes on for two to three days. So, it's not really a good art form for telling a long story. There’s a lot of selecting, trying to condense, squeezing, and fitting a story into a limited timeframe. However, that is the case when the story is long. But with Earwig and the Witch, the original novel was quite short. There wasn’t much in the original story to begin with. It was quite sparse. So, we were trying to fill in and expand the story this time.

DS: Did you always plan on making this film in 3D/CG? Did you consider 2D?

GM: Before making Earwig and the Witch, I worked on a TV series [Studio Ghibli co-production] with Shuzo Shiota’s Polygon Pictures called Ronja, the Robber’s Daughter. For that, we used cel shading and 3D/CG. That was the first time for me to work in CG and see the possibility of 3D/CG animation. So, coming out of that experience, I felt that for my next feature film, doing 3D/CG was definitely an option. And then when the time came to make Earwig and the Witch, we wanted to go with CG, but the choice was either doing it with cell shading to look 2D or go full 3D/CG. We thought, well, it's going to be our first CG film anyways, so let’s be adventurous and go full 3D/CG.

DS: How difficult was it for Studio Ghibli to move from 2D to full 3D/CG? You’ve never made a film in 3D/CG before.

GM: For me personally, the whole 3D/CG process felt quite natural. You go through the process of designing and modeling, making a three-dimensional world, then lighting and rendering to make the images. I have experience with theater, acting, and landscape architecture. From all these experiences, the 3D/CG process really made sense to me. So, for myself, I didn’t have many problems or challenges in that way.

DS: What about for the studio and the artists?

GM: To be honest, the artists working here at the studio weren’t directly involved in this project. So, I can’t say what they felt about the whole experience. To them, what we were doing with 3D/CG seemed to make things more complicated than necessary. For people who can draw, they all think, why don't you just draw that? When they see you using a computer to do all this intricate technical stuff, they’ll say, “Why are you using all these difficult processes when you could just draw it?” DS: How do you respond to criticism about the film’s look from Ghibli fans who expect a certain style of 2D films? Earwig and the Witch is a big change for them.

GM: Before going into production. I had a chat with our producer [Toshio Suzuki]. Obviously, a lot of fans love Ghibli films because they love the look of the cel animation. So, many of them would think, “Please don't go full 3D/CG.” I was quite concerned about that too. But the producer told me, “No, don't worry about that. It'll be fine.” So, we went with 3D/CG. And then, during the production, I began to feel that although the visual style was different, the story, the essence of the film, is quite Ghibli-esque. I’m quite confident in what we’ve achieved. But after we finished, the producer came back to me and asked, “Do you think people will love this?” He started to get more worried than me.”

DS: You’re the son of one of the most famous, venerated animation filmmakers in history, Hayao Miyazaki. Studio Ghibli is as revered as any animation studio. You’ve now made several films there, making you the heir apparent to your father. You want to respect the work that came before you, but also push out with your own voice and vision. Do you feel any pressure from your father’s incredible legacy?

GM: When I stop thinking about those things, the pressure starts to melt. So, I try not to think about it too much. I’m always hoping that somebody else will come and take that role instead of me. But, unlike the 2D From Up on Poppy Hill, which Hayao Miyazaki wrote, handed to me to direct, and watched alongside me as I made the film, he wasn’t watching as I made Earwig. I hope that Hayao Miyazaki and Toshio Suzuki live longer than me. I kind of believe that might even happen.

GM: Look at him. He's an octogenarian and still working. DS: GKIDS has done a great job promoting the film. Good luck with the release.

GM: Yes, they have, and thank you for your time. I hope that many people in America will watch and enjoy the film.

SCAD Alumni Talk Animation Skills, Careers, and Opportunities
Digital Domain Pushes the Limits of Monstrous VFX in ‘Morbius’
An Interview with Priit Pärn
‘Baymax!’ Provides an Rx for Humor and Compassion
How Digital Domain Brought Photoreal Characters to Life in ‘The Quarry’
Mission Critical: ‘Lightyear’s Journey to Infinity and Beyond
‘The Freak Brothers’: This is Your Humor on Drugs
END_OF_DOCUMENT_TOKEN_TO_BE_REPLACED