Atsuko Ishizuka’ highly personal 2D animated feature tells the story of 3 childhood friends who, over a summer, find that life is leading them onto very different paths of self-discovery, now available on DVD and Blu-ray. 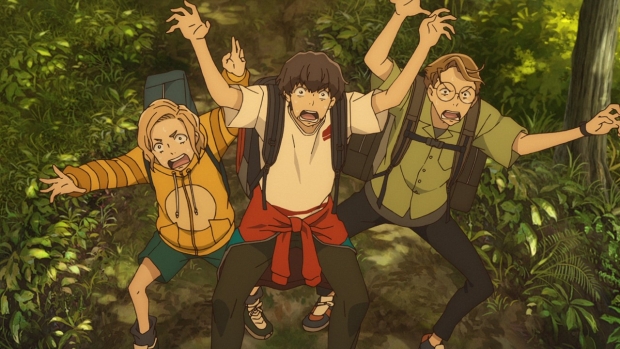 In 98 minutes, No Game, No Life director Atsuko Ishizuka has managed to bottle up the full scope of the high school experience, from puppy love crushes and paralyzing entrance exam anxiety to rebellious, past-curfew adventures and heartbreak that turns childhood invincibility into grown-up maturity.

Goodbye, Don Glees! is Ishizuka’s first original feature film and her most personal project yet. The 2D animated movie, produced by Paprika’s and Summer Wars’ Studio Madhouse, tells the coming-of-age story about friends Roma, Toto, and newest “Don Glees” club member Drop, and how an adventure into uncharted woods to track down a lost drone turns into a bittersweet journey of self-discovery.

It’s The Kings of Summer meets Bridge to Terebithia meets The Secret Life of Walter Mitty, a story that begins as an entertaining comedy before slapping audiences in the face with emotion and a surprising amount of introspection, followed by a disarming volume of tears.  Selected in the official animated feature competition at this year’s Annecy International Film Festival, Goodbye, Don Glees! is finally available on DVD and Blu-ray today, December 27.

“I put together the story using my own experiences and my emotions,” says Ishizuka. “It’s easy to lose confidence and feel lost when in high school. But, on the other hand, it’s also the time that we feel invincible, especially when being with close friends and I was recalling how I used to feel at that time to build up the story.”

Though now a successful anime director, having overseen the production of almost a dozen TV series, Ishizuka shares that as a teenager, she didn’t really know who she was and, in her words, “I didn’t know what I was worth.”

“I could have easily lost self-confidence,” says the director. “I was lucky to have my friends who reminded me of who I was just in our everyday interactions. The friends I made back when I was a teenager have a very important meaning to me. That’s why I wanted to express how fantastic friendships and bonds between people are.” But like in her film, it wasn’t just friendship that gave Ishizuka a clear sense of her place in the universe. It was a close encounter with death, though not her own.

“There is another reason I wanted to make this movie,” she shares. “A few years ago, my mother was diagnosed with an illness and a limited life expectancy by a doctor. What I felt at that time heavily influenced this film. I recognized the importance of my existence as I’m the living proof of my mother’s life. That was when the little kid, who easily lost her confidence, realized the true value of herself as the one and only living proof and treasure in this world of her mother.”

She adds, “By the way, my mother bravely fought against the sickness and won the battle. She’s doing well and fine.”

In Goodbye, Don Glees!, Drop’s character comes from Iceland and tells Toto and Roma that he’s spent a long time searching for his “treasure.” Though the two other boys at first believe Drop is referring to some buried chest filled with gold – or something to that effect – Drop later reveals that the treasure he seeks isn’t that of money or jewels, but the realization of a wish he holds deep in his heart.

He also tells his friends of a phone booth, hidden at the foot of Iceland’s “Golden Waterfall” that, when he picked up the phone inside, revealed what Drop’s treasure would be. And, allegedly, anyone who visits the mysterious phone booth would also be told of their own treasure in life. While the idea of an eternal treasure came from her mother, the conduit of the phone booth was an idea Ishizuka stumbled upon when she was already doing research for her film.

“I wanted to go on a research trip to Iceland, but I had to give that up because of the pandemic,” she explains. “So, I collected a lot of books to learn about the landscape and culture of the Island. I also utilized the online street view service and repeatedly went on a virtual tour around the country. I probably spent much more time exploring this way than I could have by actually going on a physical trip. While on one of the virtual tours, I bumped into a phone booth and that is where I got this idea from. The location of this phone booth is actually far from where this story takes place, so I tweaked around it. But the model definitely exists.”

The Golden Waterfall is also an entirely real place in Iceland.

“However, I used multiple different waterfalls as references and I combined and mixed various images,” says Ishizuka. “If I had gone to the actual Golden Waterfall, I might have tried to recreate its image as is. But since I was traveling while sitting at my desk, I was able to use more of my imagination which led me to create my own version.”

In addition to its magical exploration of the wonders of Iceland, Goodbye, Don Glees! also turns common sites in Japan into their own special marvels. One of Ishizuka’s favorite spotlights is the blue flower fields featured in a Roma’s flashback of a school field trip, where he discovered his love for photography and for classmate Tivoli.

“The blue flowers are called nemophila,” shares Ishizuka. “We have several gardens that are famous for it in Japan. There actually was a time when taking photos of them and posting them on SNS was trending in Japan. Since everyone was following the trend and taking pictures of the blue flower carpet, it has become a ‘frequently seen’ or ‘ordinary view’ for me. That is why I had Tivoli, the character who sees the charms that others often don’t see, take a picture of the scenery that captures the essence of it.” The nemophila, tunnels carved into rocky mountain surfaces, an abandoned road no longer in use, slides of waterfalls, riverside beaches and small, countryside villages where there’s little to do other than set off backyard fireworks… these are all real, yet not real, features of Japan Ishizuka creates to capture the essence of a teen summer and invoke strong memories for any adults watching.

“All of these things can be found near Tokyo, but the village is based on my own imagination,” says Ishizuka. “I believe the combination of the Japanese countryside and summer reminds everyone of the good old days. It is often described as a ‘Japanese virgin landscape.’ I tried to depict this very carefully because I wanted grownups like us to feel nostalgia while watching this movie.”

The director also hopes audiences are filled with awe as events unfold in the film and reveal that, even in the face of death and identity crisis, there’s room for some magic.

“Life has more possibilities and the world is much wider than we think,” says Ishizuka. “This is the message I wanted to share with the audience. How wide this world can be is up to the individual. Miracles do happen.” Goodbye, Don Glees! coming to fruition is a bit of a miracle in-and-of-itself for Ishizuka, who was admittedly shocked that so many of the blurred images she’d been daydreaming of in her head for so long were accurately and fully translated into a moving story.

“It has become such an important experience for me,” she says. “If you had an interesting dream the night before, just telling your friend that you had an interesting dream doesn’t communicate much. We cannot share the images in our heads. That is why we created a picture for images in my head so that people around the world can share them. But I had never imagined loose images becoming a tangible substance that is seen and sympathized with by people around the world. We accomplished such a magnificent project.”

Choc Chip Animation Riffs on Pop Culture in ‘The Art of Murder’
F is for Flake: The (Not So) Great Animation Robbery?
Re-VIEW: ‘Avatar: The Way of Water’ – A Miraculous Vision
‘Kung Fu Panda: The Dragon Knight’ Celebrates a Special Lunar New Year
END_OF_DOCUMENT_TOKEN_TO_BE_REPLACED