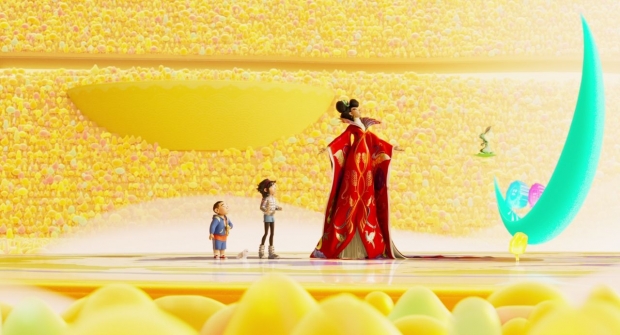 Grounded in all too relatable familial struggles and emotions, and brought to the screen through vibrant, unreal animation, Netflix’s newly released animated musical Over the Moon takes both its young heroine and color palette to a whole new world in an effort to brightly illustrate the process of grief.

The film, produced by Shanghai-based Pearl Studios, was animated at Sony Pictures Imageworks, the powerhouse VFX and animation studio behind films like Spider-Man: Into the Spider-Verse, the Hotel Transylvania franchise, both Cloudy with a Chance of Meatballs films, and Phil Lord and Christopher Miller’s upcoming Connected, all projects set on blowing viewer’s minds with innovative, be it oversized food items falling from the sky, or inter-dimensional portals bending the very fabric of our universe. Now Imageworks is at it again with a musical fantasy adventure.

Directed by Glen Keane, Oscar-winning director of Dear Basketball and legendary Disney animator best known for The Little Mermaid, Beauty and the Beast, and Tangled, Over the Moon was a story that originated in the mind of Joy Luck Club’s Janet Yang, who drew from the legend of Chinese Moon Goddess Chang’e. Yang imagined a story about a 12-year-old girl who builds a rocket to the dark side of the moon to prove the goddess’ existence; she passed the idea on to Audrey Wells, noted writer of Under the Tuscan Sun, George of the Jungle and Shall We Dance. While in China, Wells became fully acquainted with her main character, Fei Fei, and wrote a highly personal, universal story about a girl who loses her mother to illness and seeks to prove to her father that love never fades by coming face-to-face with Chang’e who, as legend has it, still carries a torch for her own lost love Houyi.

Sadly, Audrey herself passed away from cancer in 2018; the film has been dedicated to her memory. “Dealing with grief, and learning to see things from a different perspective, can be a journey in itself,” says Over the Moon’s FX supervisor Ian Farnsworth. “And it’s important to know that it’s ok to heal through play.” Farnsworth, a father of three, says that while grief is “not usually a subject we think about geared toward children,” it’s one of the reasons, along with the chance to work with Keane, that he was excited about Imageworks taking on the project’s animation. “I liked that it had this real, emotional aspect to it, along with this nice fantastical side of it too,” he says. “And for me, it just felt like a nice way to present some of the things that Fei Fei was going through.”

The first part of the story is set in Wuzen Water Town, where Fei Fei grapples with the death of her mother, helping in the family’s moon cake shop, while working hard to hide her disdain for her father’s remarriage; her family teases her long-held belief in the Moon Goddess, a belief instilled by her late mother, something she dearly clings to. While animators and visual effects artists like Farnsworth aimed to make the town’s flowing rivers, rustling willow trees, and flying white cranes as real as possible, Fei Fei’s expedition to Chang’e’s moon palace in Lunaria, a glowing lantern-like city based on Joan Miro’s colorful and geometric paintings, made up of light-beam roads and vibrant, highly-saturated gelatin-esque creatures, was a different story entirely.

“When I saw the early character and environment designs, they just blew me away,” says Clara Chan, Over the Moon’s CG supervisor. “This is the first time in my 20-year career that I'm working on a story related to my culture, which is very special to me, and I thought it would be a great challenge to do a movie that looks so beautiful.” “For the moon characters, we wanted them to be reminiscent of lanterns with the way they glow,” explains Chan, who grew up in Hong Kong and derived inspiration both from Keane’s pictures taken from his visit to China as well as memories of festivals from her own childhood. “And the material that they're supposed to be made of is magical. So, when we do our shading, we want to make sure it's partly gas, partly liquid, and partly solid. We don't want it to look exactly like water or Jell-O. We want it to be a mixture of these things, so that no one can tell exactly what it’s made of.”

“In our history for this movie, all the Lunarians were formed from Chang’e’s tears,” adds animation supervisor Sacha Kapijimpanga. “So, they needed to have a watery, gelatinous movement to them. It was definitely a big challenge and took a lot of exploration and testing; we were trying to figure out what the rules of this world were, like how the newer Lunarians would have more fresh watery movements and the older Lunarians, that had been around for a while, would be more gelatinous. We really tried to push ourselves hard on this movie.”

But with a concert scene featuring over 250,000 Lunarians, and bike race through a bright pink meteor shower on the moon’s surface, the challenging world of Lunaria gave the animators an enticing opportunity to break down new barriers in animation; it was the more realism-based sequences that amplified their labor of love. “The scene that really moved me was where Fei Fei learns how to make mooncakes,” says Chan. “Over many years, you see her grow up, and her mom gets sick and passes away. We had to go through a lot of different sets, but the final product, which was technically challenging, feels so warm. I've never felt so emotional. I have a daughter who is about Fei Fei’s age and I can't tell you how many times I cried while working on that sequence and this movie. But I still can’t wait to show it to her.” “One of our biggest challenges, actually, was Fei Fei,” adds Kapijimpanga. “She was our first character, so she really established what the animation style was and the level of detail that Glenn was after. Fei Fei is going through a really difficult point in her life where she loses her mom, and she's introduced to this new, potential member of the family and, for anybody, that can be a difficult time. She's struggling with figuring out this new form of family dynamics and it's filled with really great acting and animating opportunities.”

Many of the heart-felt realism scenes on Earth actually parallel those during Fei Fei’s time in Lunaria, such as games of leap-frog, Fei Fei’s creation of her rocket, and Chang’e’s creation of her love resurrection potion; their two pet rabbits are gifted to both characters as a way to handle losing a loved one, while Fei Fei’s soon-to-be new mother and brother paralleled with Chang’e’s faithful Lunarian companions.

“It’s almost like making two different movies,” says Kapijimpanga. “But that’s what gives it balance and drives those messages home. I hope people really connect with Fei Fei, and that they get lost in just believing that she's real, like she believes in Chang’e.”

Farnsworth ads, “It’s easy to get carried away with giant explosions or magic. You want it to be this big event, but you don't want it to take away from the story or what's happening with the characters and their emotions. Sometimes, it’s better if our effects are a little invisible and sometimes it’s better when they are explosive. Whatever you do, it has to feed the story.” Chan believes Over the Moon is an illustration not only of universal grief, but of a chance to illustrate a global concept while highlighting Chinese culture. “Family is such an important part of Chinese culture,” Chan shares. “Seeing people’s relationships through the eyes of a Chinese family and through the stories I grew up with as a child, I think it lets people understand more about our culture, with more understanding and, hopefully, less discrimination.”

“There is so much that I didn’t know about China either and it’s been a great learning opportunity for me too,” she concludes.

Over the Moon is now streaming on Netflix.