‘The Ghost and Molly McGee’: A Supernatural Take on Real Friendship

Bill Motz and Bob Roth’s new 2D kids’ series, about an energetic young girl and a grouchy ghost, brings heart, humor, and a bit of horror in the grand Disney tradition; series premieres today on Disney Channel and next week on Disney+. 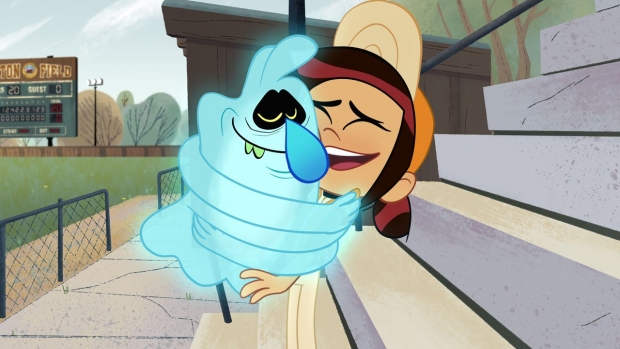 It’s not every day that a show gets renewed for a second season ahead of its first season premiere. But according to Bill Motz – whose new series The Ghost and Molly McGee premieres today on Disney Channel - it’s about having the right ingredients.

“We really set out to make a Disney show,” says Motz, who co-created the series with longtime friend and fellow kids’ animation writer Bob Roth. “We like the Disney experience, so we wanted to incorporate all the elements of what we think are classic Disney storytelling: the heart, the humor, and a little of the horror just for fun. Also, I feel like when you come away from a Disney film, you feel a little better for having had that experience, maybe even a little more hopeful. We wanted to bring all of that to the table. And I guess the studios must agree that we’re right on target.”

The Ghost and Molly McGee follows the unlikely friendship between a young, energetic optimist named Molly and a grouchy, introverted ghost named Scratch. When Molly and her family move into a worn-down house that Scratch inhabits while he works to make the town as miserable as possible, the pessimistic poltergeist sets a curse on Molly that he will haunt her every move all day, every day. But, to Scratch’s extreme disappointment, a bright-eyed Molly sees the curse as a promise of best friendship and, suddenly, Scratch realizes he might be the one who’s cursed.

Still, as this unconventional pair spends more time together - and after Molly offers her new ghost friend his own dollhouse mansion - both Molly and Scratch find they learn a lot from each other’s opposite personalities and that being stuck together might not be so bad.

“We were really clear from the get-go that we didn't want to do a show about two people who hated each other,” says Roth. “This is a show about a best friendship at the core. That doesn't mean there aren’t times where they're driving each other crazy the way friends do.” Produced by Disney Television Animation, Flixzilla Aura and WildBrain, the 2D series began as a “dropped out of the sky into our laps” idea, according to by Roth. But it soon began to morph into a story Roth and Motz realized they knew from personal experience.

Roth and Motz have not only worked together on multiple projects, from Lego Star Wars: The Freemaker Adventures to The Penguins of Madagascar and Kim Possible, but they’ve been friends for over 30 years, first meeting at a summer production workshop at the University of Southern California. “Bill is an extrovert, an optimist, and a happy-go-lucky,” says Roth. “I'm an introvert and pessimist and just happy to be left alone. And that's who Molly and Scratch are. Once we had our friendship as the touchstone for the series, everything grew out of that and fell into place almost supernaturally.”

Motz adds, “It’s easy to think about these polar opposites as remaining polar opposites and that one is good, and one is bad. But we've learned over our friendship that we shape each other. I tend to be prone toward magical thinking, like everybody's my buddy, and it's all great. Bob tempers that a bit with, ‘Hey, maybe make some appropriate boundaries.’ I think that's been healthy for me. I'm a better person because of my relationship with Bob and, likewise, Bob has opened himself up to people and taking chances and opportunities. I think Bob can reluctantly admit that he is a better person because of his friendship with me.”

But Motz and Roth aren’t the only ones on the team benefiting creatively from a long-time friendship. Their co-executive producer Steve Loter, known for his directorial work on American Dragon: Jake Long and Kim Possible: A Stich in Time, has also worked with Motz and Roth for years.

“In the relationship of the three of us, if you have an optimist and a pessimist, I bring the quirk to the table as the neighbor next door who comes over and never leaves and eats everything out of the refrigerator,” says Loter. “It’s been fantastic working on this because I’ve known these guys for a long time, and we can finish each other's thoughts in a lot of ways. All of the great elements that you could see in a Disney show, with the heart, the comedy, and the narrative, we all share those same sensibilities.”

Before Steve came onto the project, Roth says the show’s animation already had “the Loter thumbprint” as Steve’s brother John was the first one to draw an image for the character Scratch. The design stuck and the show follows the look of, as Loter puts it, “50s classic Hollywood cartoons.”

“It felt like back then, every studio, Disney in particular, was creating a look that was just so rich and so beautiful,” he says. “So, we have that influence there. We certainly have a modern sensibility that's tied together. But I think the biggest inspiration, the biggest push for the visuals, is our voice actors.” Mystic Quest and Attack on Titan’s Ashly Burch lends her voice to Molly while Aqua Teen Hunger Force’s Dana Snyder plays Scratch. Both actors are well experienced in extreme animation and over-the-top tonal expression, and it’s served the show in more ways than just the comedy.

“They both are really fantastic at what they bring to the table,” says Loter. “Their voices have such wonderful peaks and valleys, that you want to do the animation just so keyed into the characterization you're getting, that you find that you're distorting the facial expressions, and you're breaking the model seat to basically hit something that was just so fun in the way they said it.”

Motz adds, “What Steve also gave us was this brilliant spin interpretation, a modern sense of timing and pushed expression and pushed energy that just elevates the show up even more.”

The elevated comedy and expression for The Ghost and Molly McGee also comes from the fact that the three executive producers have spent the production not only trying to make a beautifully wacky series that’s true to the Disney vision, but also just trying to make each other laugh.

“I think that’s the thing that unites us,” says Loter. “Some of the fondest memories I have are sitting in an editing bay, going over an animatic, and just trying to top each other with gags and jokes. We're just trying to make things funny for us. And, hopefully, find a way to connect to an audience.” With so much comedy and expressive animation, audience connection can prove a trial for some shows. But whether it’s a family game night bottle episode or seeing Molly’s vulnerability spotlighted as she admits to having a tough time making lasting friendships, the story of a not-so-scary ghost and not-so-scareable girl living in a not-so-haunted house is filled with as much sweetness and sincerity as it is spooky and silly fun.

“We leaned into what we believe Disney does best,” explains Motz. “When you say the Disney name, it conjures this idea, this image, this feeling. We wanted to be a part of that legacy and to tell that kind of story. The family faces some adversity in Season 1. They face some tough things, they’re thrown some curveballs, but the McGee family pulls together and finds a way to get through challenges and difficulties. I hope that the show is encouraging, and says to people, ‘Maybe we can face this stuff together and get through it.’”

Roth adds, “I don't want to get into too many spoilers, but Molly and Scratch’s friendship is tested in a really hard way. And I want people to cheer when they triumph.”