Get Out Your Cocktail Shaker: ‘Archer’ Rolls Out Season 13

Art Director Justin Wagner and Animation Director Megan Johnson size up the new season - complete with lots of pre-production art - of the acclaimed series, which premiered last night on FXX and today on Hulu. 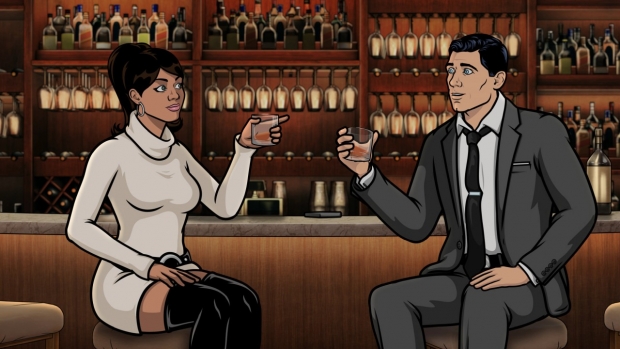 While the FX adult animated comedy series Archer may or may not be the funniest adult animated comedy series of all time (and there’s at least circumstantial evidence to support the contention that it is), it is without question the only series of any genre in which one of its main characters spends an entire season transmogrified into a parrot. And if the avian incarnation of the morally-challenged mad scientist Algernop Krieger (Lucky Yates) is perhaps the most outrageous of Archer creator Adam Reed’s imaginative leaps, the series, over the course of its 12 seasons, has never failed to surprise.

For the one or two holdouts who have never watched the series, Archer chronicles the misadventures of a dysfunctional intelligence agency run by the irascible Malory Archer (the late Jessica Walter), who also happens to be the mother of the highly skilled, but undisciplined, super-agent who’s the show’s central character. In the new season, which premiered yesterday, August 24, on FX sibling network FXX (also now streaming the next day on Hulu), the agency has been acquired by rival operative Fabian Kingsworth (Kayvan Novak) and his spy conglomerate IIA, leading to a variety of existential conundrums, in addition to the usual chaotic goings-on. Season 13 also represents a significant watershed, since it will be going out into the world without the indelible Walter, who died last year.

While Walter will be sorely missed, the good news is that Archer will continue to benefit from the creative talents not only of Reed and the rest of the voice cast, but the visual artists who defined and developed the series’ distinctive mid-century minimalist style. Not least among these are Justin Wagner, who started as a storyboard artist in 2012 and has served as art director for three seasons, and animation director Megan Johnson, who has “been doing it a very, very long time. I can't even think.” (This will be her fifth season, after a couple of years as lead animator.)

We spoke with Johnson and Wagner about the new season, the state of their production pipeline, and how they help ensure that Archer remains (arguably) the funniest adult animated comedy series of all time. AWN: What can you share about the new season? What should we all get prepped to see?

Justin Wagner: We constantly have the opportunity to take our core gang and drop them into new scenarios. So you can anticipate some novel situations. Obviously, last year, we lost a tentpole of the whole series in Jessica Walter. She was fantastic and irreplaceable. But, if you’ve seen the trailer, you probably already know that a big part of it is, where's the gang going to go? Who's going to lead and how much are they going to fight over it? Of course, Archer will be as obtuse and jerky as ever.

Megan Johnson: A few of the main characters have some big changes coming their way this season. I won't tell you who it is, but it's been a lot of fun working through those things this year.

AWN: Any guest stars you can share with us?

MJ: I think Alison Pill is my fave.

JW: Kenan Thompson will be in it. I feel like we always get guest stars that fit perfectly with the rest of the cast, and those two are great. And everyone's favorite, Christian Slater, is back. AWN: Great to hear, can’t wait. As we’ve discussed in previous interviews, you’re constantly challenged by a tight schedule. And, as you mentioned, the show’s setting and scenarios are ever-changing, which means there's always new environments, new costumes, new vehicles. Have you incorporated any updated tools or processes into your pipeline that have helped streamline production?

JW: As the art director, I'm a little bit more attached to the front end of the pipeline with pre-production storyboards, character designs, and environment designs. Megan is the animation director, so she's also working with all these pieces as an art director in her own right, just at the other end of the pipeline. One thing we’ve done is we've started to aim our work more directly at her compositors and animators, who have to actually animate each shot.

MJ: It's been a huge help for this season, just communicating more between departments. With backgrounds, for example, if we wanted to move a camera through a scene, we used to be stuck with one painting that we would try to manipulate as best we could. Now we can go and get flats painted and do an actual 3D buildout in After Effects. It just makes the shot look so much better. The parallax is actually correct, instead of faked.

AWN: In pre-production, do you still have roughly the same schedule that you've had in the past, with regard to writing, boarding, et cetera?

JW: It’s still the same sort of gauntlet. When you have a pipeline that tight, you have to make swift changes and also set some things up that hit the sweet spot between not taking too long with it and not undercutting it. We try to hit precisely what Megan is going to need down at the end to make that parallax shot work. Maybe we come back with a couple of little notes, but beyond that, we have to be pretty precise and get pretty close to that bullseye, from planning it with storyboards, to having all the assets and putting it together with an animator. AWN: Megan, are you working with Justin and anyone else earlier on in assessing where you're going to need extra time at the animation and compositing part of the pipeline?

MJ: Yeah, I definitely let them know. And I think they know too when things are going to be crazy. When you watch the season, you'll see a couple of acts that are pretty hectic and I'm sure you'd be like, “Oh, yeah, they probably needed more time on this.” So, yeah, I'm a part of those conversations as early as I possibly can be. Because I keep a very close eye on that schedule, knowing that my deadline is what's going on TV.

AWN: Is there anything new this year in terms of tools?

MJ: There’s something we started implementing last season that we're calling asset management, which is really helping the illustration department move faster because we have such a massive library of older drawings. It helps us in finding anything that we can reuse. Of course, some of those drawings don't fit the bodies properly anymore, so there's a little finessing that needs to be done, but it's helping speed up the illustrators, so they can focus on making really nice new drawings that we need. We've also started implementing previs on the 3D side, where we’ll do a little more prep work envisioning a car chase or what have you.

AWN: Is that done primarily for camera? Is it done for story beats? What are you trying to accomplish with that?

JW: Little bit of everything. They're sticking to what's delivered in the animatic, but we can finagle a few seconds here and there if one shot needs to be a little bit longer than the next one.

It's also about figuring out the camera moves to see how it’s going to work. Even if it does end up in the hands of a compositor on Megan's end, we have to make sure that what's getting delivered is workable. AWN: The fact that the characters and the comedy are so well defined at this point must make things easier. Still, there are always new things to deal with in a new season. What were the big challenges for each of you in your respective roles for Season 13?

JW: I think, for me, it always comes down to the script. My job is to visualize the written words on a piece of paper, no matter what the content is. But you’re right, I've worked on Archer so long that there are certain scenes where I know right away exactly how it needs to be laid out and how the joke needs to land. For example, I know we need to end on a flat group shot as everyone stares at Cyril for the dumb thing he said, to let that moment sort of simmer for a bit.

But, even though Adam Reed oversees the whole season, the scripts are written by different people. So we always have new stuff each year where I'll be like, "Ooh, this is a different kind of joke. This isn't just cut wide in front of Cyril and let him look stupid. This is something else." So everything is a process. I would probably get freaked out if I looked at the entire season at once, at the mountain of work we have ahead. But taking it piece by piece, script by script, scene by scene, it becomes more digestible for us and our artists.

MJ: For me, it's the challenge of stepping back and looking at the story as a whole, and seeing the comedy behind it, versus nitpicking in the animation: Is this frame looking right? Is this tween OK? Is the explosion happening at the right time and is the smoke thick enough? Just the need to continually change focus back and forth is probably the biggest challenge on my side.