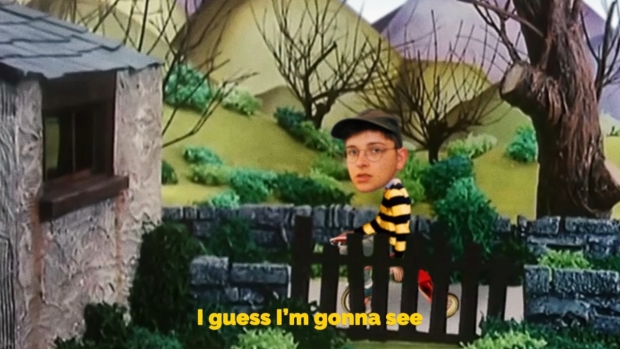 Recording artist and animator George Moir has shared with AWN his latest music video and brand-new single, “Big Boy Cruising” out today via Infectious Records (Alt-J, DMA’s, Rejjie Snow). Moir’s collage-style animation is inspired by Fisher Price toys and 1980s stop-motion classics like Postman Pat and Fireman Sam, as well as his eccentric, homeschooled upbringing that included spending time beekeeping with his father and seven siblings, and later becoming an animator for a therapist.

According to Moir, “Big Boy Cruising” addresses the hopes and dreams we all have through child-like rose-tinted glasses. "It’s a song about having overly optimistic, huge ambitions. I approached the whole song from a very naïve, childlike place, partly because it was really fun to write, but also because I think it’s quite a humbling way to look at your life goals; it makes it a bit easier to hold onto your dreams less desperately, because who knows if they’re actually gonna happen or not."

His debut EP “Spare Room” dropped this past March; an eclectic release of neo soul/wonky pop with elements of jazz/R&B, the music has a similar vibe to George Ezra/Tom Misch/Bombay Bicycle Club. As an accomplished animator, Moir creates the visuals for all his music videos, spending hundreds of hours meticulously crafting each piece; take a moment to watch two previous videos, People Pleaser  and Blame.

Big Boy Cruising showcases Moir’s talent for using nostalgia as a means of escapism. With this latest work, the artist follows up his two previous “fully fledged” music video with his first lyric video. “The focus was a lot more on the overall concept and art style, rather than having a particular narrative,” he shares. “It’s basically a looping video based in the world of Postman Pat; it’s nostalgic, childlike, and a weird blend of miniatures, collage, and live-action.”

In the short, we see an animated version of the artist riding a tricycle through Postman Pat land, one of the many cartoons that inspires his visual world. To realize his vision, the tool of choice was After Effects. “Once I’d collated all the different elements I needed, the production didn’t leave the software until it was done,” he explains. “The actual process of animating was quite fun. Once I rigged up the character puppet, it was a case of tweaking rotation values and timing into a perfect loop. I did kind of get a bit lost in Nerdville; my favorite part was adding in a few expression controls - which is basically like Adobe talk for coding - so I could get some automated variation to the cycling loop.” “Inspiration for the look of the film came as we were writing the song,” he continues. “Josef Page, who wrote and produced it with me, joked about having a Postman Pat video to go with the song, and the idea stuck! I really liked the idea of melding the George Moir and Woodland Animations universes; it ties in quite nicely with the existing design choices I’ve made for the project. The color scheme I stick with is based on Fisher Price toys, and I always use a 4:3 aspect ratio for my films, so the kiddy VHS vibe of 1986 Greendale was a perfect pairing.”

Integrating the various elements to drive home the piece’s multimedia feel was a bit of a challenge. “Just to tie everything back to my usual collage style, I did a lot of sky replacement with some illustrated clouds,” the artist says. “The process of tying the looks together was a bit of trial and error; a lot of the initial design work was done for me with the existing film, so most of it was matching the fuzzy, grainy feel of the original tape scan. The icing on the cake though was the color grade; it’s always super satisfying to see everything gel together underneath a nice grade, and it was lovely seeing what were very dull, drab colors pop out into beautifully saturated, hue-spun swatches.”

The biggest challenge, however, wasn’t his lookdev. It was rotoscoping. “I had the initial job of separating up the stills from Postman Pat into depth layers, so I could stick the character behind fences and trees and stuff,” he describes. “The worst was rotoscoping around my chin. I’d filmed myself on a makeshift t-shirt greenscreen, which meant most of my head was cut out for me already. I hadn’t thought about my neck though. Turns out it’s quite hard to get a shot of your head from the front without your neck poking out from behind your chin. So, a huge amount of production time was just spent tracing around my jawline, which is kinda tricky if you’re not Johnny Bravo. I got there in the end, but I think I might just paint my neck green next time.” “’Big Boy Cruising’ is the first in a collection of songs that I’ll be putting out this year, so you can keep up to date with me on Instagram if you’d like to hear more,” Moir concludes. “I post some behind the scenes stuff there sometimes, as well as lots of other cool bits and bobs. You can find me at @georgemoirmusic.”