The acclaimed creator of ‘Dexter’s Laboratory’ and ‘Samurai Jack’ reflects on the unique format and surprise success of ‘Genndy Tartakovsky's Primal,’ his Emmy Award-winning animated series about the friendship between a caveman and a T-Rex, whose second season debuts today on Adult Swim. 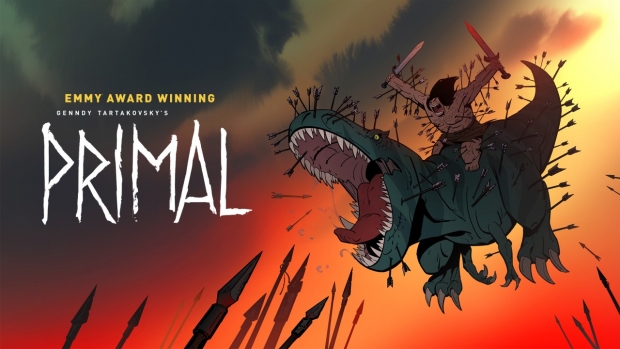 For a generation of animation fans, the name “Genndy Tartakovsky” carries considerable cultural weight. A four-time Emmy Award and two-time Annie Award winner, Tartakovsky helped shape some of the most memorable and influential animated series, including Dexter’s Laboratory, Star Wars: Clone Wars, and Samurai Jack. In the world of animated features, he’s best known for his work on the Hotel Transylvania franchise, which, given its troubled beginnings, may not have existed at all without his heroic efforts.

Tartakovsky’s latest creation, Genndy Tartakovsky's Primal, which debuts it’s second season today on Adult Swim, is a beautifully designed, nearly dialogueless animated series centered on the friendship between Spear, a caveman (Aaron LaPlante), and Fang, a dinosaur – one at the beginning of his species’ story and the other nearing the end of his – and their fight to survive in a violent, primordial world. If Primal’s premise and format seem remarkably unlikely, so too has been the series’ success; it won five Primetime Emmys and two Annie Awards, boasts a 100% approval rating on Rotten Tomatoes, and is currently a top 10 most-watched series from the Adult Swim library on HBO Max.

At the dawn of Primal’s Season 2 – in which Spear and Fang journey to a new world to rescue their compatriot Mira (Laëtitia Eïdo) from her captors – we spoke with the director about the unique approach and unexpected success of his very personal project, how the second season builds on and expands the series’ singular world, and the multiple joys of animation.

Enjoy the Official Season 2 trailer before continuing with the interview:

AWN: Even for someone like you, whose work has always been adventurous and included unusual narrative elements, Primal – with its small cast and sparse dialogue – is something of a departure. What creative itch does this show scratch for you?

Genndy Tartakovsky: It's the specific style of storytelling, which is kind of pulpy, and very specific to its own world. It's something that the 12- or 14-year-old kid in me just loves. These stories are very simple, but emotionally complex. And, as an animator, they're so much fun for me because I get to tell them visually. I get to tell them with movement. I get to do super-fun cool action. It’s difficult to get support for a project that has a very specific perspective, because many people believe that the more specific the perspective, the less it's going to work for the mainstream. Obviously, I don't believe in that.

AWN: You once told me that when you’re working on an idea, if you can come up with 10 stories in 10 minutes, you know it’s solid. How long did it take for you to come up with the 10 episodic stories in the second season?

GT: It was definitely harder than the first because of where we're heading story-wise. When you're doing sci-fi or fantasy or adventure, there are certain clichés that you can fall into. And I fell into those right at the beginning, and we were working out the story, and I just hated it. There was nothing special about it. And I said, "Let's stop. Let's break this all over again."

And the second time we just forced ourselves to work against the clichés. And, all of a sudden, that opened up a bigger and more interesting world.

There are surprises in these 10 episodes that are going to shock people. And, as a storyteller, I am so excited about this because it is the unexpected. There’s a whole new dynamic and emotion that we didn't have in the first season. We could do more complex emotional things because we realized it worked –  people understand more complex stories without dialogue. AWN: What else can you share about the new season?

GT: If you've seen the trailer, it has everything. There are definitely more civilizations. And even though the whole show is obviously a fantasy, there really is scientific evidence that Homo sapiens and Neanderthals existed at the same time. And so I just took that further – that there were different civilizations that existed together. Some more primitive, some more civilized. And even though we don't have as many creatures, I feel like our civilizations are more twisted and dangerous than creatures. Because humanity is horrible. We're doing things wrong consciously. So you can definitely expect the unexpected. You can expect incredible epics, huge stories, some great surprises along the way. The emotional dynamics get heightened and heightened with every episode, and you won’t believe where it ends up. And, visually, we're still pushing ourselves – it’s greater, grander, and bigger.

AWN: Can you talk a little bit about the production itself? Same team for Season 2?

GT: Yeah. Basically, the same. We had a board artist, Bryan Andrews, who worked on the first 10 that couldn't join us for the second. So, I ended up doing more episodes, which was fun. We had a pretty small team. Christian Schellewald, Scott Wills. Darrick Bachmann is writing with me. Tyler [Bates] and Joanne [Higginbottom] did the music. Joel [Valentine] did the sound effects. And Studio La Cachette, I know they went through a couple more people here and there, but generally, it's the same crew.

AWN: What were the main challenges?

GT: I don't want to say it was effortless, because the effort was huge, but it was definitely smooth. When COVID hit, I was already home and so I was comfortable working at home. Everybody went remote, but we didn't lose a step. The thing that was a little difficult was that there was a sudden influx of shows to make and, for a while, it was hard to get people. So we struggled with that a little bit, but, otherwise, I would do the storyboards, and the artists had so much confidence drawing Spear and Fang and doing the animation that I had less adjusting to do. It’s still television. We still follow a TV budget and schedule, but just up our game and make things a little crazier. But, the biggest challenge was how do we produce on a bigger scale without breaking the studio. AWN: Did advances in technology during the past years have any impact on how you designed, planned, and executed the new season?

GT: No, we're still basically traditional animation done on a Cintiq in TVPaint. Everything's animated by hand. We take advantage of all the little technical advances from five years ago. Ink and paint is easier than it's ever been. But the core of it is still the same. This project was always supposed to have a 2D animated feeling. We tried very hard for it not to feel digital. So this one is not taking advantage of anything, technically, that's been happening around town. It's still old-school animation.

AWN: Do you see more Primal past Season 2? What does your crystal ball tell you?

GT: The crystal ball is definitely hazy. As you know, television, in general, is going through changes, especially Warner Bros., Cartoon Network, Discovery. We’ll have to see who's left after the dust settles. I do have big ideas for Primal. Even while I was helping out with Hotel Transylvania 4, I was doing it. It brings me so much joy. It's very unique in that way. We have challenges along the way, but not on the scale of other things, and how frustrating other things can get. I'm hoping that the second season explodes. After we won the Emmy, which was a super-great surprise, it definitely shifted the landscape for me. People weren't saying, "Hey, can you do this for us?" They would say, "Hey, what ideas do you have that we'd love to do? Can we do another Genndy project?” And that is the first time that's ever happened outside my little Cartoon Network family.

Right now, with Primal, I’m making the best show that I would love to watch myself. And I really hope that everybody else will get on board. You know? The second season is such a big jump from the first season. And I think people will be surprised. And it's such a ride that I really hope people tune in and give it a shot. After that, we’ll see. AWN: Any idea what those next Genndy projects might be – aside from a third season of Primal?

GT: It's an interesting question because usually you're pitching seven things at once, and you’re lucky if one of them goes, right? And a couple of years ago, three things of mine got greenlighted, which was unheard of. So not only was I doing Season 2 of Primal, I was doing Unicorn, which is a show that I had been trying to sell for over 15 years. And then Fixed, my 2D animated R-rated feature ­– which I'd had for 12 years – got going. So now, at the end of all these projects, I'm all of a sudden, "Well, okay. Slow down. What actually do I really want to do next?" And that's the first time I've ever asked that question of myself. And I don't have that answer yet, but I definitely have five things that I want to do that I'm super-excited about. But the reality is there's still no guarantee that somebody's going to buy something. So I still need Primal to be super-successful to keep going. It's Hollywood. You're only as successful as your last thing.

How ‘Luck’ Applies a ‘Less is More’ Approach to Comedy
Z is for Zagreb: The Animafest Zagreb Exhbition 1972-2022
Dude! - ‘Rise of the Teenage Mutant Ninja Turtles: The Movie’ Arrives
‘Super Giant Robot Brothers’: A Milestone in Virtual Animation Production
‘Luck’ Aims to Bring Hope to Kids In and Out of Foster Care
Pre, Tech, and Post: The Many ‘Vizings’ of ‘Chip ‘n Dale: Rescue Rangers’
Hammering Out the VFX in ‘Thor: Love and Thunder’
END_OF_DOCUMENT_TOKEN_TO_BE_REPLACED