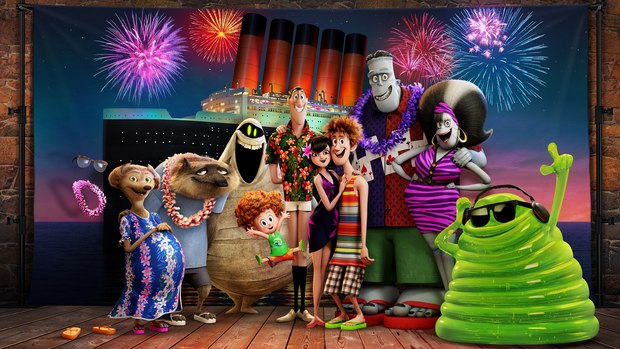 Hotel T3 finds our favorite family of misunderstood monsters taking a break from the rigors of hotel management to head out on a much-needed vacation…to the Bermuda Triangle and an exotic, though potentially nightmarish family cruise!

Tartakovsky, who directed both previous Hotel Transylvania films, is back, this time as both writer and director, alongside Michelle Mordocca, who produced the previous two films as well as this latest franchise entry. The entire cast is back again as well, along with newcomers Jim Gaffigan as Abraham Van Helsing and Hahn as cruise ship captain Ericka.

It’s always fun to watch a panel of voice actors riff on their animated film performances, as almost without exception, they only meet each other in person at such events, as their work on the film is primarily recorded solo. Yesterday’s panel, centered around a relaxed and smiling Samberg, was no exception, as the assembled actors, along with the director, answered a few questions and joked about their latest monstrous adventure. Sony Pictures Animation president Kristine Belson started things off by introducing the film -- Tartakovsky then took the stage, highlighting the film’s main story and character arcs, richly illustrated with a number of amusing clips from the mostly finished film.

Tartakovsky, fresh off helming the hugely successful Season 5 Cartoon Network return of his hit series, Samurai Jack, agreed to take on the third Hotel T film -- after initially turning down the offer -- once he was given complete creative control. As both writer and director, he was able to setup the story, and visual tone, from the early stages of pre-production, to better push the gags and animation even more than he was able to previously. The result, at least in extended clips shown yesterday, is a fantastic looking, elaborately staged and expertly timed cartoon sure to entertain audiences that have shown great affection for the series so far.