In animator Terry Ibele's whimsical stop-motion short, a wizard casts his spell on audiences, turning everything in his path into ducks. 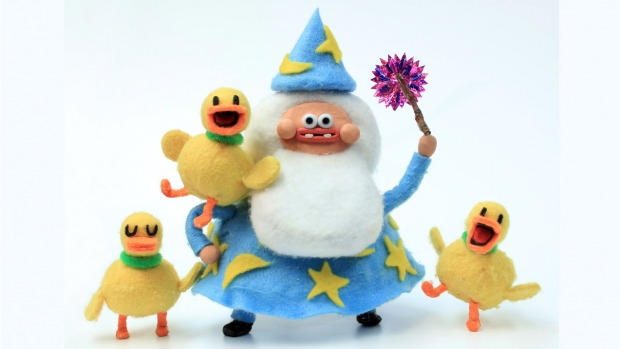 While Ibele is no stranger to stop-motion and Claymation, The Silly Duck Wizard is his first film after an eight-year-long hiatus spent working in marketing. Ibele recounts his struggle between animation and working in business, finally realizing he “can't stop thinking about animation.” “Last year, I quit my job, and started studying at Sheridan College,” he shares. Utilizing the school’s stop-motion studio, Ibele spent more than 300 hours over the span of three months to create the 1:28 minute short.

Even though he began the project without a story, he knew whom he wanted for voice over. According to Ibele, “On a whim, I reached out to one of my favorite animators, Davey Swatpaz, who I had previously interviewed on my podcast. I asked if he would be interested in voice acting if I ever animated something that needed it. He replied back instantly and said yes! So, I grabbed a pencil and paper and sat on my couch and about two minutes later I had sketched out the concept for the film. I emailed it to him, and a few days later he sent me back the sound bites.” With such a specific concept, it would be easy to assume Ibele loves ducks. However, the sweet yellow fluffy birds were born from the collaborative process. “I don't particularly have a thing for ducks, but Davey Swatpaz does,” he reveals. “He did a series called Turbo Fantasy where one of the main characters is a duck and his quacks are just great. I wanted to capitalize on his duck sounds and so ducks were in the idea from the beginning. I actually have a thing for wizards! I think they're so silly and mystical and all around just fun characters to work with - what's better than an old crazy dude with magic? Like, how did he get it? What does he do with it? Who knows!”

In order to achieve the rich, realistic textures and smooth-as-butter character movements, Ibele utilized a combination of stop-motion and Claymation. “Everything was made from dollar store items,” Ibele explains, in addition to, “a stick I found while walking my dog,” and “a chicken nuggets box.” Adorable! As for why he chose stop-motion, Ibele says, “There are some stories you can't tell through 2D/3D. Stop-motion has the unique ability to make real-life objects come alive. I've always liked working with clay, because it looks so real. You can see fingerprints on it. You can tell someone is behind the scenes sculpting it. That's why the wizard's face is clay. The rest of him is felt, because felt gives off a texture that's hard to replicate in 2D/3D. You can see the fibers move between frames. It looks like it feels like something” Duck Wizard has garnered much attention since its release on YouTube, partly due to its viral status on Reddit. The internet loves magic ducks! The short even won ‘The Big Pitch’ at the Toronto Animation Arts Festival International (TAAFI), where Ibele pitched it as part of a children’s series.

After such a promising first step back into animation, Ibele plans to, “Soak up as much knowledge about the industry and improve my technical skills as much as possible” during his remaining time at Sheridan College. He also wants to, “create opportunities in stop-motion here in Canada” so that no one has to “take roles in 2D or 3D” due to lack of opportunity. Never give up the dream!

For more information about Terry Ibele, visit his website and find him on social media:

Animated Characters: The Art of Babbitt – Part 1
Bruce Smith and Ralph Farquhar Talk ‘The Proud Family: Louder and Prouder’ Season 2
VFX is the ‘Thing’ for Tom Turnbull on Tim Burton’s ‘Wednesday’
We Need to Chat
Choc Chip Animation Riffs on Pop Culture in ‘The Art of Murder’
F is for Flake: The (Not So) Great Animation Robbery?
Re-VIEW: ‘Avatar: The Way of Water’ – A Miraculous Vision
‘Kung Fu Panda: The Dragon Knight’ Celebrates a Special Lunar New Year
END_OF_DOCUMENT_TOKEN_TO_BE_REPLACED