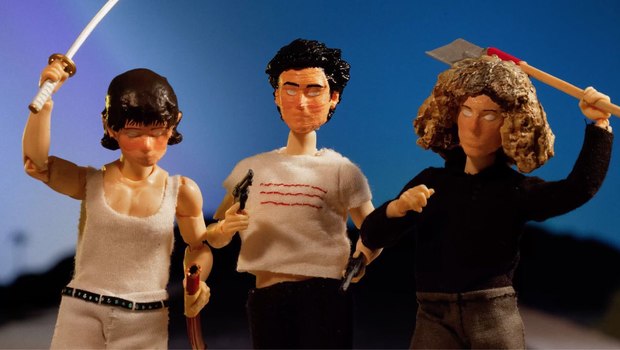 In our latest Fresh Takes, we share with AWN readers a charmingly chaotic stop-motion music video, Wash, based on a new track from LA alternative rock band Liily. The animated short was created and co-directed by Liily guitarist Sam De La Torre and filmmaker DL Guerra.

“Wash” is the band’s first new music since their debut EP, “I Can Fool Anybody in This Town.” They describe the song, with its accompanying animated music video, as “a taste of raw energy; wild, angular and percussion-led chaos which rivals that of indie dance hall classics ‘Gang of Four’ or ‘The Rapture.’”

Liily’s music is riff-heavy and cacophonous; their mosh pit-featured live shows bring to mind many rock forebearers such as Jane’s Addiction, Foals and Rage Against the Machine. The band is led by vocalist Dylan Nash, guitarist and lead visual artist De La Torre, bass player Charlie Anastasis, and drummer Maxx Morando, whose bandmates claim “may simply play faster and harder than any drummer on the planet and who is the lynchpin behind the band’s memorably visceral live performances.”

Created over an 11-day period, the short features action figure versions of the band careening through Los Angeles in a series of visual collisions, with car chases and supernatural creatures. “From the first day of shooting till the last shot, it took us 13 hours a day for 11 days straight,” De La Torre shares. “We had a show at Echo Park Rising in the middle of the first week, so we took one day off.” All told, nine people worked on the short, usually 3-4 at a time. “We had two directors and two assistant animators who helped with lighting, setup and moving the characters,” he continues. “We had a costume designer who did sewed all the clothes, one artist to paint faces, shoes and any other micro paint jobs, and a main set designer who I worked with directly since the start of the project. For the live-action shots, we had a DP for one day.”

For De La Torre, ideas for the music video coalesced over a short period, inspired in part by architecture student projects he happened to check out before heading to Spain this past June to play at the Download Festival in Madrid. According to the guitarist, “The video idea came just as naturally as the song. We wrote the song in less than 3 days and the idea seemed very clear from the start. A lot of ideas for the film came from seeing students working on final projects at SCI-Arc, the Frank Gehry architecture school in downtown LA. Seeing those projects inspired me to what was possible… they made it seem like every idea was doable. Soon after, I made the first storyboard, and drew up a lighting setup the day after we landed in Madrid for Download Fest.” As you can imagine from the film’s engaging, simple rawness, it employed a considerable amount of down-and-dirty filmmaking that make it that much more enjoyable to watch – you can almost “feel” the animators’ hands pawing everything in-frame. “Many of the final shots were ideas originated the day of shooting,” De La Torre explains. “I choreographed the final fight scene the day we shot it. The monster was also designed the day we shot it and redesigned for each close-up. By the end of production, I had made six different versions of the monster just by reforming the clay and making slight changes that were suitable for specific shots. The monster’s blood is made of a goopy material we found on Amazon called ‘Unicorn Poop.’ And, we broke Maxx’s sword, our most expensive prop, four times on the shoot, gluing it back together each time it fell apart.”

3D printers were used to create heads for all the characters, as well as a miniature of Flush Records’ owner (their record label) used in the opening live-action shot. The scene with an American flag flying in the Hollywood Hills depicts a real location, as do a number of other shots within the film including the Casa Vega Mexican restaurant, complete with planters. “The American flag is shown in a real place at the top of a hill in Hollywood where I live,” De La Torre reveals. “I used to spend a lot of time there over the years with the rest of the band and our friends. The miniature house that’s above it is also based on one of the houses that’s really there. We shot the video in an office warehouse space that my family has owned since I was born. It was once Saul Bass’s photo studio, but more recently was used as a production office and screening room for Tarantino’s Once Upon A Time In Hollywood. That’s why we made a Tarantino reference on the Casa Vega stage.” Of the three cars featured in the video, one is a miniature version of the ‘Flush Records’ Chevy van given to the band by their record label. “The Chevy 'Flush Records' van should’ve been our largest vehicle in comparison to the Shelby and El Camino, but we used a Hot Wheels car instead that we painted with toothpick brushes,” De La Torre notes.

Guerra came to the production with a background in directing, editing and shooting music videos, commercials and independent films, as well as in stop-motion animation. He began making shorts on VHS as a teenager, creating more than a dozen by the time he finished High School. He graduated from Full Sail in 2010 with a degree in Film Studies, founding his own production company, Black Canvas in 2011 before moving from his hometown of Houston to LA in 2015. All told, Guerra spent three straight days editing the film, 60 consecutive hours with only a few short naps in-between. “It was nuts, but the whole thing was nuts,” De La Torre concludes. “Almost every single person I had mentioned the idea to either said I wasn’t going to be able to do it, or just laughed at me. And these were mostly animation industry people.”

So there… sonic and visual mayhem people said could not be done. For your viewing and listening pleasure. For more information about Liily and DL Guerra, visit their websites and find them on social media: