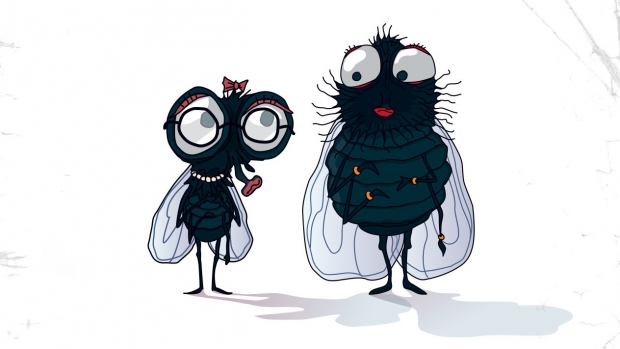 In our latest Fresh Takes, we share with AWN readers Episode 1 of Gnat & Tina, the inaugural short from Brandon Martin and Eric J. Trujillo’s new bi-weekly animated series. The cute, cheeky short chronicles the lives of two houseflies, tired of living life in the house, who go on a mission to get out and experience the world. Martin and Trujillo will drop new episodes every two weeks, and post animatics, GIFs, and other fun content in-between releases.

The 100% quarantine-produced “very short” short was produced entirely via Zoom. Trujillo created characters and backgrounds in Adobe Illustrator, animated and composited in After Effects, and edited in Final Cut Pro. The idea for the series arose while the two filmmakers were musing about life in quarantine. “We were both getting antsy (pun intended), and we bonded over feeling like houseflies looking out at the world from a windowsill,” Martin says. “That sparked the idea for the series.”

With Martin in LA and Trujillo in Spain, they weren’t sure the time difference would allow the extensive and intimate daily collaboration needed to develop and produce the property. “Initially we weren’t sure if it was feasible to produce an animated short film completely over zoom,” Martin reveals. “Eric lives in Valencia, Spain and I'm in Los Angeles, so there’s a considerable time difference. And that was only one of many obstacles we had to overcome. How would we collaborate? How would we bounce ideas off each other? How would we read the actors? How would we record the actors? What about editing? What about scoring music? What about all the Netflix we wanted to watch?”

The fortunate upside to their unfortunate pandemic-induced unemployment was free time, which, Martin says, gave them the opportunity to “address each question, jump over each hurdle, and complete our first Quarantoon!”

The production began with Martin penning the short. “Our workflow started with a script,” he explains. “I’m a screenwriter so that was my department. Once I had the script, I sent it to the actors and read/directed them over Zoom. I had them record their performances with their smart phones and send me MP3s, which I then sent to our sound editor, Phil Galanty. He dropped the files into Pro Tools, and we tweaked and edited the rhythm and timing of the vocals over Zoom.” “Once the vocal track was completed, I sent it to Eric in Spain for illustration and animation,” he continues. “First, he used the vocal track to create an animatic, and we discussed it via several Zoom meetings. We talked layout, character design, visual gags, etc. Then he created a production rough, which was a combination of stills and animation; it was just enough to tell the story. This helped us lock in the comedic timing of jokes and other character movements. Based on those conversations, we locked in the final animation.”

Looking ahead, Martin shares that new characters and expanded stories are coming. “In future episodes we’re going to expand the world of the series, introduce a bunch of new characters (including a pesky Mosquito named Laird who totally sucks), and dig deeper into the voices and psyche of our two protagonists. These expansions will require more detailed and sophisticated animation, so we're really just getting started!”

For more information about Gnat & Tina, Martin and Trujillo, find them online: