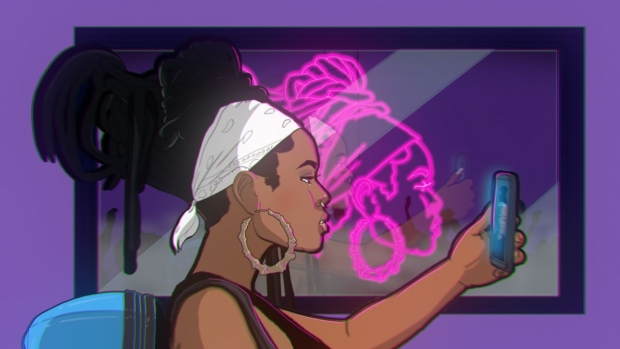 In our latest Fresh Takes, we share with AWN readers a 2D animated music video directed, produced, and animated by Konee Rok for the song “The City” by DJ Aktive ft. Common, Freeway, Bri Steves, and DJ Jazzy Jeff.  Rok’s short is a colorful and soulful glimpse of how people are molded by the experience of growing up in a metropolitan landscape.

In the video, the crew raps about their childhoods, struggles, and lessons learned from the cities they grew up in. The smooth, clean lines, bright colors, and glowing characters create a fun, funky, undeniably hip-hop experience. Love for the genre and topic drips from every scene as classic hip-hop sound meets modern artists and animation tools.

Discussing how the project came his way, Rok says, “Michael MacArthur first contacted me about doing a music video for Estelle, whom he manages. We ended up not doing that video, but stayed in contact. About a year later he came back and said he wanted me to listen to a new album by DJ Aktive, an artist he also manages, and see what songs I liked. I liked the whole album, but one stand out for me was the song ‘The City featuring Common, Freeway, Bri Steve’s & DJ Jazzy Jeff with production by Ivan ‘Orthodox’ Barias.’ And Mike said, that’s perfect because that’s the song they wanted me to make a video for.”

Knowing the video had to be animated, Rok contacted his friend Erica Schisler at Adobe. “She knew my animation work and had been encouraging me to use Adobe’s Character Animator app because it fell in line with some of the work I was already creating using Photoshop and Premiere Pro,” he explains. “Due to her suggestion I dabbled in Character Animator on a feature documentary I did animation for called Beyond Driven, which we premiered at the Cannes Film Festival. I kept her up to date with that project and she invited me to let her know if any other interesting projects popped up. I felt like ‘The City’ was a project where I might want to fully embrace using Character Animator. So, I asked if she thought Adobe might want to be involved and she was excited about it.”

Rok had free reign over the video’s overall look and feel. “There were no instructions,” he notes. “No overseeing the process. I sent them a couple clips of me drawing to use as a promo. But really, I didn’t want them to see it until completed because it was structured in such a way that you had to experience it as a whole to feel the full impact. So, this video is purely a start to finish representation to the screen of what was in my mind.” Rok created timeless visuals that represent the artists in an enjoyably lifelike yet enhanced manner. “The concept was to celebrate each artist’s relationship to their city and within that, visually acknowledge specific lyrics that you might normally miss if you were to only HEAR the song,” he says. “For the look of the video, I knew I wanted the color to pop and be well balanced so that any frame you looked at was aesthetically pleasing. And it was important that the likeness of the artist translated. You had to immediately know it was them but at the same time I wanted clean simple looks for the characters. The video lives in an area between real and cartoon.”

Shifting from his traditional animation styles to integrate Adobe Character Animator, Rok had to break away from old habits by adding new steps to his routine. According to the director, “Using Adobe tools, I normally have a simple 1,2 punch. Draw in Photoshop. Stitch together in Premiere Pro. The film is structured in Premiere and I build out all the pieces of art in Photoshop and fill them in bit by bit. This time though, it became a 1, 2, 3. First, I spent some time studying what Character Animator could do. Dave Werner does a great job of breaking it down in his Okay Samurai channel. I observed how it was being used by other people. It was important for me that I didn’t let this program tell me what to make, but that I made the app work for me. I started asking the question. ‘What haven’t I seen people do with Character Animator?’ And I came up with a few concepts that I thought I could do that might push Character Animator forward.”

In working with the software, Rok pinpointed three technical difficulties he was able to overcome: walk cycle, lip sync, and blinking. “One of the staples of Character Animator is the ability to add a sideways walk cycle to a character that you design on Photoshop (or Illustrator),” he says. “I had a scene in the video where rapper Freeway is using his arms to swing from building to building on an upside-down Philadelphia skyline. So I started exploring to see if I could invert the walk cycle to work on his arms instead of his legs and make him effectively do a ‘monkey bar’ swing across the city. It was a challenge, but turned out to be possible.” “Another element of Character Animator is the ability to motion capture your performance turning your head back and forth, revealing different head positions,” he continued. “I designed heads for rapper Common with profile, three-quarter and frontal views so he could turn his heads left and right while still performing. All of these heads had 14 mouth positions that I was able to sync to Common’s vocal accapela. Normally Character Animator does a good job of syncing with live talking, but I spent some time doing manual tweaks to his mouths since rapping lyrics can be abstract as opposed to simply speaking.”

Rok’s final battle was with the blinking of neon lights, explaining, “I created a pink neon sign depiction of rapper Bri Steves. To get the full effect I wanted the sign to blink on and off. I ended up having to create two sets of multiple head turns for her. One set with the neon sign ‘On’ and the other set, ‘Off.’ I figured out how to set up an animation cycle that I set to a certain rhythmic timing that had her blinking to the beat while she performed.”

Looking back on the process of developing a visual narrative to complement the song, Rok says, “It’s always different with each song. The main thing I think about is what is the likely thing someone would create for this song? Then I put that aside as a possibility and start exploring what else can be done that isn’t being thought of.”

Rok is continually driven to discover and present ideas he hasn’t seen before. “I like things to be clear, but unexpected, in a way that is intuitive,” he concludes. “It has to ultimately make sense, so the logic is always there even if it’s not obvious. I also enjoy putting light on details about the artists that maybe only a few people would understand, which makes it personal for the artist and gives substance to the presentation. Its always challenging, but very satisfying when you complete a work that you believe in and that the artists are thankful for.”

For more information about Konee Rok, visit his website and social media: France’s TeamTO Gets By with a Little Help from Their Friends
Another Chance at Unplanned Parenthood in ‘Teenage Euthanasia’
A Grandma and Granddaughter Bond Over a Love of Wrestling in ‘Nona’
Prime Video’s ‘Do, Re & Mi’ Hits All the Right Notes
Brad Neely Channels his Arkansas Childhood in ‘The Harper House’
Playing a Deadly Board Game of War in Iron Maiden’s ‘Stratego’ Music Video
Patrick Osborne Takes Billie Eilish on a Dreamy Iconic LA Tour
Cantina Creative Helps Turn the Hands of Time in ‘Loki’
END_OF_DOCUMENT_TOKEN_TO_BE_REPLACED