Fresh Takes: The Disturbing and Heartbreaking Tale of ‘Girl in the Hallway’

In Valerie Barnhart’s hybrid 2D stop-motion short, her first animated film, Jamie is still haunted by the guilt of ignoring the girl in the hallway. 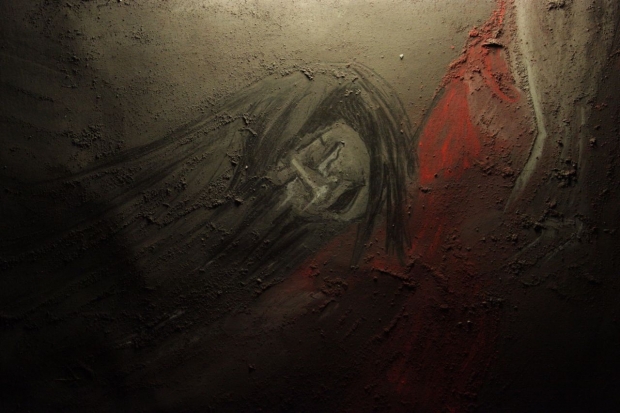 In our latest Fresh Takes, AWN is pleased to share Girl in the Hallway, Canadian animator Valerie Barnhart’s bold, poignant, and unforgettable hybrid 2D stop-motion short film debut. We’re kicking off 2020 with a bang, presenting a piece that is as impactful as it is heartbreaking and haunting.

AWN editor-in-chief Dan Sarto met Valerie several years ago at the Ottawa International Animation Festival, where she shared her idea, a bit hesitantly, for the film – she wondered out loud if her lack of animation experience would hinder the project. Thankfully, she took the plunge, and with a $760 budget, taught herself to animate by creating a piece that has gone on to earn nominations, wins, and accolades across the festival circuit.

In the film, Jamie lives with his wife and newborn daughter in a dangerous neighborhood. Every day, he encounters a sweet yet lonely little girl in his apartment complex’s hallway. He knows nothing of her home life, her parents, or even her name; the stresses and worries of his own life distract him from questioning the girls’ obviously precarious situation. One day, the girl, Xiana Fairchild, goes missing. 15 years later, Jamie is still haunted with the guilt of ignoring the girl in the hallway. “This is a testament to locked doors. A lullaby sung by wolves with duct tape and Polaroids. Not all girls make it out of the forest.”

Girl In The Hallway from valerie barnhart on Vimeo.

According to Barnhart, the film is a True Crime Docu-Horror, based off a spoken testimony of Jamie DeWolf, a poet and author known for his talents in spoken word. She was moved by the story, wanting to shed light on the tragedy of passive indifference. “Witness testimony provides insight into the violence inherent in silence and inaction,” she explains. “My film sheds insight on one aspect of this slow burn of an ongoing genocide that is Murdered and Missing Indigenous Women, Girls, and Two-Spirit.”

After finding DeWolf’s work online, the director was forced to act. “I came across his performance on YouTube, and with what came into my mind's eye, I knew this story had to be made into a movie,” she reveals. “I contacted Jamie and got his blessing. As production went forward, I did everything I could to find out all the details about Xiana Fairchild and this particular serial killer, Curtis Dean Anderson. Once I found out Xiana was Indigenous, this located the story in a completely different context. I believe silence and inaction is a major factor in how this particular genocide is ongoing. This makes telling this story especially important. I was simply not in a position to be silent.” Barnhart was compelled to tell the story visually, believing, “Storytelling is medicine. Our communities need these stories.” She set the tone for horror with her unique animation technique. Having no prior experience with animation, and limited by a micro budget, the director opted for a unique look and feel, untouched by popular styles and methods. “I used whatever I had lying around the house, like duct tape and shot glasses,” she shares. “I only used one pad of paper, a newspaper, graphite, charcoal, conté, and pastel. All my moving mechanics were made using origami. I constantly changed and combined techniques so that the artistry could reflect the psychological space the phrasing demanded. I animated in one take, straight ahead, chronologically in Dragonframe. Since I was learning as I went, I was scared of post-production. So I animated in order to avoid it. There was no compositing - everything moving was animated at the same time. Post-production took 10 days, which consisted of Photoshopping things like my finger or a pencil out of the frame.”

Despite her newcomer status, Barnhart’s film has been a critical success, winning the Festivals Connexion – Région Auvergne-Rhône-Alpes Award at Annecy, Best Short Film at the Manchester Animation Festival, Judge’s Animation Award at the AmDocs festival, and Cinématheque de Grenoble: Coupe Juliet Berto Award among other wins and nominations.

After entrenching herself in such a dark subject, Barnhart looks forward to embracing a much lighter, comedic tone for her next project, gaining inspiration from “reading books in every genre, travel, talking to strangers, looking at art, watching a lot of cinema,” and “laughing at her own jokes.” Her success is a testament to sheer will and the power of art. For other budding artists and storytellers who have a crucial message to share but doubt their abilities, Barnhart says, “You aren't limited by your budget, you're limited by your artistry. Take risks […] and NEVER GIVE UP! [N]o matter how hard production gets.” For more information about Valerie Barnhart, visit her website and find her on social media: