‘Freebird’: Changing Hearts and Minds on the Realities of Down Syndrome 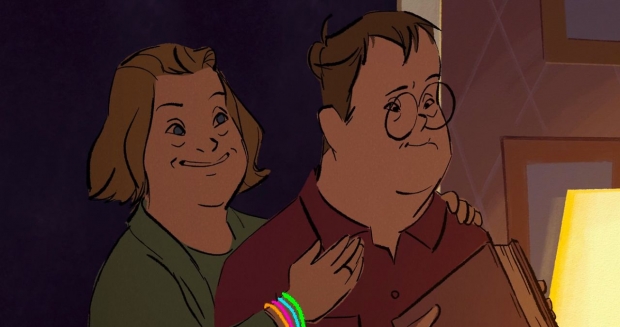 Among the many “differences” that define, and frequently divide, people, perhaps one of the most misunderstood is Down syndrome. The animated short film Freebird – which was released last March to mark World Down Syndrome Day, and recently qualified for Oscar consideration by winning the Chicago Children’s International Film Festival – is dedicated to putting to rest misconceptions about this genetic disorder and those who have it.

Based on years of oral histories from individuals with Down syndrome, Freebird utilizes a simple 2D animation style, and a soundtrack featuring the inspiring song “Freedom” by Canadian musical artist Jordan Hart, to tell the coming-of-age story of Jon, a boy with Down syndrome who learns to navigate the world and overcome its many challenges.

Freebird was written and directed by Joe Bluhm and Michael McDonald, with creative direction provided by actor and LGBTQ activist Nicholas Herd, who also has Down syndrome. We spoke with McDonald about the production of the short (which originally was going to be live-action!), the aesthetic choices that were made, and what films like this can do to change heart and minds.

Take a few minutes to enjoy the film and the interview that follows:

AWN: How were the duties shared among the three principals, and what were Nick Herd’s specific contributions?

For example, when we were discussing the butterfly chase scene, it sounded a little bit like this:

Joe: “If we give Jon glasses, we’ll lose too much face real estate to portray the more subtle emotions in later scenes.”

Me: “And from a plot perspective, we don’t really need the glasses.”

Nick: “Growing up, most everyone I knew with Down syndrome had glasses. It’s just really common. So I’d like to see Jon look the way I remember us looking.”

In the end, we kept the glasses and Joe found a brilliant solution: he drew the glasses using just two circular frames. If you look carefully, you’ll see that Jon is rocking Morpheus-style glasses, which allowed the team to draw those subtle expressions without losing accurate representation or sacrificing certain character qualities in the script. AWN: Can you say a little more about Nick’s role?

MM: Nick engaged in a kind of “adaptive directing,” which required our removing barriers that would have otherwise prevented him from participating fully. Once this space was opened up, he flourished as a creative director. He helped me choose and hire Tonic DNA, he weighed in on everything from which scenes to cut, to which character designs to greenlight, and which performances were resonating. His diligence helped safeguard us from replicating the mainstream misrepresentation we were trying to overcome.

And interestingly, even though this was Nick’s debut as a filmmaker, the skill set of creative direction wasn’t a leap for him. Every day he steps outside his door, he steps into a world that has a superiority complex. He’s constantly having to deal with others’ expectations, navigate multiple perspectives, and get people to see what’s really there. And a good filmmaker does just that: guides perspective, distills reality, directs vision. So, in way, Nick has been a director-in-training his whole life.

AWN: The film was originally going to be live-action, but, due to the pandemic, was changed to animation. Can you talk about the process of translating the original script to a different medium?

MM: The pivot to animation opened up all sorts of possibilities, large and small. For example, I went back into the script and added the graduation scene. Initially, I hadn’t included any scenes with more than six people, to comply with Montreal COVID regulations. (Animated characters are immune to the virus, so no worries there.) There were also small changes, like giving Jon’s dog, Willow, a bit more personality.

But the closer we got to production, the more we realized how much more labor animation requires compared to live-action, and how much more expensive it is. This meant that we had to distill the story even more. In the end, we cut out about eight minor scenes. It was tough to say goodbye to those scenes, but our goal was to condense Jon’s life into a few minutes and that’s ultimately what we accomplished.

In the end, I’m truly glad we chose to work in animation. It was the perfect medium for this story. AWN: The film’s style is very simple, which is in keeping with the simplicity of the story. Were you influenced by other artists or films that have used a similar minimalist style?

MM: As I was redrafting the script for animation, I was seeing something similar to Michael Dudok de Wit’s Tom Sweep or The Monk and the Fish in my mind’s eye. More than anything though, we wanted a style that matched our activism. What if, in an industry so captivated by CG, we were to “disable” the aesthetic to the bare minimum: a few lines, a few shades, a rough sketch? People with Down syndrome, unjustly, are often treated as rough sketches. Could we develop a style whose beauty would be deepened by its refusal of industrial sophistication? Of course it’s one thing to dream about a minimalist aesthetic, it’s another to match the 42 muscles in the human face with the expressive power of a well-placed line. But that’s exactly what Joe and [animation studio] Tonic DNA did, frame after frame.

AWN: Jordan Hart’s song “Freedom” is a major component of the film. How was the decision made to use it, and at what point in the development and/or production process was it incorporated?

MM: The choice was mostly due to serendipity. My brother had invited me to breakfast to tell me that he and his wife were going to adopt a child with Down syndrome. I’d been working as a disability activist for years, so he had a lot of questions for me. As I drove home after breakfast, thinking about my future niece, I stopped at a red light and saw that I had an email from a buddy who I hadn’t heard from in months. It was Jordan. He said that he woke up at 2:00 am that morning with the impulse to send me his latest unreleased song. So he sent me the song and the last line in his email was: “Could we do some sort of collaboration for World Down Syndrome Day?” I played the song and a story began to flash before my eyes… AWN: Do you think this film will change people’s minds about Down syndrome? If so, why?

MM: Great question. I hope you’ll allow me to get heavy and historical for a moment. While people with Down syndrome have been around forever, the last 150 years have been the most devastating. Their bodies were stigmatized, they were criminalized, they were “invisibilized” (incarcerated at birth and warehoused until death), they were victimized by genocide in Germany’s T-4 program.

After WWII, the world woke up and started re-analyzing disability discrimination. At the same time, people with disabilities created breakthroughs in their own visibility. In the 1970s, Sesame Street featured an actor with Down syndrome. In 2020, Zack Gottsagen presented an award at the Oscars. And this year, three filmmakers in wheelchairs were on the red carpet. These are all visibilities that change things. So I hope that seeing Jon’s life in animation in Freebird will be another visibility that changes things.

Method Studios Walks Us Through History for ‘Eternals’ End Credits
‘Josee, the Tiger and the Fish’: Embracing People with Disabilities in Anime
‘Dune’: The Inner Workings of Ornithopters, Sand Worms, and Creative Moviemaking
Re-VIEW: ‘Encanto’ - Seeking Beauty in Truth
WetaFX Delivers a Monstrous 3rd Act for ‘Shang-Chi and the Legend of the Ten Rings’
‘The Spine of Night’: Redefining Fantasy and Animated Filmmaking
‘The Musician’: Celebrating Human Resilience with Cutout Animation
Plague Diversions: Gazing at the Shortlist for the Best Animated Short Oscar
END_OF_DOCUMENT_TOKEN_TO_BE_REPLACED