‘The Freak Brothers’: This is Your Humor on Drugs

Executive producers Courtney Solomon and Mark Canton get into the weeds about the creation and upcoming new season of their Tubi animated series. 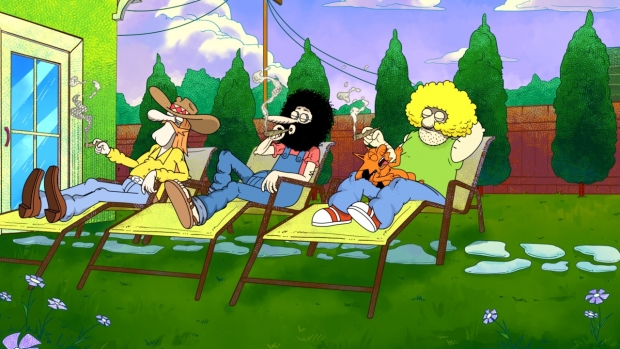 In the world of underground comix, which flourished in the late 1960s, Gilbert Shelton’s Fabulous Furry Freak Brothers was among the best-loved and most popular creations.     Comprised of Freewheelin' Franklin Freek, Phineas T. Phreak, and Fat Freddy Freekowtski, the trio of dedicated stoners – and their more intelligent roommate Fat Freddy’s Cat – were an integral part of the alternate universe originated by R. Crumb in Zap Comix. While other characters from those halcyon days found their way into animated form over the years – most notably, R. Crumb’s Fritz the Cat in Ralph Bakshi’s 1972 feature –  it seemed the Freak Brothers were destined to exist solely in the two-dimensional, non-moving world of the printed page.

On November 14, 2021, The Freak Brothers, an eight-episode animated series based on Shelton’s immortal characters, premiered on Tubi. Featuring an all-star roster of voice talent, including Woody Harrelson, John Goodman, Tiffany Haddish, and Pete Davidson, the program brought the iconic trio (plus cat) into the modern world – literally, since the show is premised on the characters waking up in present-day San Francisco after a weed-induced 50-year nap. Needless to say, a prolonged period of adjustment follows, as they attempt to adapt to life with a new family, the Switzers, in a universe that’s a little different from the one they remember.

Recently renewed for a second season that will debut in December, the show no doubt has many high points yet to come. To find out what some of them are, and to get the straight dope on what it was like to transform the iconic comic into an animated series, we spoke with executive producers Courtney Solomon (AFTER, Mr. Church, Cake) and Mark Canton (STARZ’s Power Universe, 300, Den of Thieves). AWN: What can you tell us about what's coming in Season 2?

Courtney Solomon: We had a great time doing Season 1, with its “we don't give an F” attitude about life, which is very Freak Brothers. I think you can definitely expect to see more of that, and even more of that. We took the time during the off-season to read all the comments of the fans – what people liked and what they would like to see more of – and we made sure we incorporated that into the new season as much as we could.

You're going to see some new fun characters, and some storylines that would shock even the biggest Freak Brothers fan. Most importantly, we want to see the Freaks and the Switzers grow as that sitcom family, as you would expect them to grow. So, there'll be some evolution across the whole season. And maybe one or two topics that we stop and take a deeper look at, which is something we were waiting to do in the hope that we would get to a Season 2.

Mark Canton: I think that, like all good programming, when you’re working with talented writers and a talented cast, it's evolutionary, and that's a big part of the Freaks. We were fortunate when we cast the show that we cast it with such extraordinary, bedrock talent who knew the cannabis world. And also, there was a guy named Pete Davidson, who's now Pete Davidson. So, it's like, who knew? We didn't know he was going to become this social media rockstar.

I think what Courtney was saying about evolution is very important. In the second season, you’ll start to feel more of a sense of connection. Audiences will not only broaden, but they'll anticipate Season 3 as well. We hope to follow in the footsteps of the great animated series that have preceded us over the years, the ones that we love – The Family Guy, King of the Hill, The Simpsons. So, it's very important to us that we grow the show in a connected way, because we're not only speaking to the freak-verse, we're now expanding into a much wider audience as well.

CS: I just want to add one thing, which is not the most important, but it’s up there, which is a lot more comedy.

CS: We've added some good punch-up writers and some good extra people in the writers’ room, and we want to have more jokes. That’s been a big focus for the whole season. AWN: What worked in Season 1 that you’re continuing, and potentially expanding, in Season 2?

CS: I think, with what's going on in the world and in our country at this moment, for a lot of people it was refreshing to see the Freak Brothers. That was a comment that we saw a lot. We didn't care so much about what we were supposed to do or not supposed to do, because we were telling the story of the brothers. We had to tone it down from what it was in the original comic book, because we definitely couldn't do that. But an overwhelming majority of people were like, sigh of relief, had such a good time, just loved it.

The open use of cannabis and not caring, open discussion about sex and not caring – I think people really responded to things like that. We saw the Freak Brothers in the tradition of the Three Stooges or the Marx Brothers, and putting these guys from the 1960s into the 2020s gave them license to not really know how our world works. It created a whole commentary on like, "Well, what's actually more screwed up now than it even was back then” and vice versa. So we're going to play into that more.

And of course everybody loved the cast, although some characters took some getting used to. Converting the cat from a male alley cat to Tiffany Haddish was something that a lot of people had trouble with. But, by the end of the season, they loved Tiffany Haddish and they were, like, "If it had to be anybody doing that, then she was the person to do it." AWN: Were there any fan criticisms that made a particular impression?

CS: People wanted us to deal more loftily with some of the storylines. They wanted to see us make a bit more of a statement, considering the format that we've chosen for the show and how we tell the story. And, as I said, we had thought about that in Season 1, but we kind of wanted to treat things with kid gloves in the beginning. We're not going to be so shy about it in Season 2. And the other thing was they wanted more humor. And we were like, "Great, we want more humor as well.”

AWN: You both have a sizable body of work, primarily in live-action. How does working in animation compare to your past experience?

MC: I, for one, am preferring animation because I can tell everyone to fuck off and no one can actually yell back at me. But we were very fortunate because, when the pandemic hit, everyone suddenly wanted to do animation. We were ahead of the curve by at least a year. Our attitude as filmmakers is to always up the level of what we do and never lose the core. But I think it's our job now to be expansive. So we're enjoying the challenge of being the best version of ourselves, our team.

CS: I wish I'd gotten into animation a lot earlier. It’s been a true pleasure. For one thing, the actors are never angry at you because you're only doing two-hour sessions at a time when you record. And then being able to create the world, create the palette, and being able to tell any story you want. There are still budget constraints, but it's not the same as if you're doing it in live-action. The characters in the Freak Brothers universe can go on a trip anywhere, we can take them back in time for a flashback. We can have so much fun with them in this universe that we've created. And that's what we like to do.

MC: It's sort of a new golden age of animation. Audiences have many more choices and we love that. I mean, you have real animation audiences, where people – not just kids – would rather watch animation. That's fantastic. AWN: The comics on which the show is based are iconic – in the subversive storytelling, the characters and the design. What have the challenges been in transferring that 2D comic aesthetic to an animated show?

CS: We started off with the premise that we wanted to take the comic to the next level, but we wanted to stay true to what made the comic great. So, with the backgrounds, for example, we spent literally a couple of months considering different options. If you look very carefully at individual frames, you’ll see all of the shading that R. Crumb and Gilbert Shelton became famous for in creating their textured world.  But it goes beyond just the look, obviously. When you read a book, you create voices in your head, and then somebody turns it into a movie and you're like, "That's not how that person sounded." That was probably the most difficult thing, even though we had our amazing cast. We just had to go with, "Well, we're going to make it like this and hope that more people heard it that way than didn't." But everything was very carefully considered. We're still working on how they move.

MC: Courtney spends insane hours with the team going through every detail. This is the way we've approached this – you really do have to get the authenticity. We're extremely confident about what we're doing, but we're never satisfied.

CS: I'll leave you with something Gilbert said, after he watched the episodes. We were all pretty nervous because Gilbert is a tough customer. What he said was, "I'm mostly happy." And that was a big compliment. Somebody who's worked with him for 50 years told us, "That's as big as it gets with Gilbert. That's it." So, Mark and I are sort of the same way. We're mostly happy, but we're never going to get too entirely happy. We just keep trying to make it better.