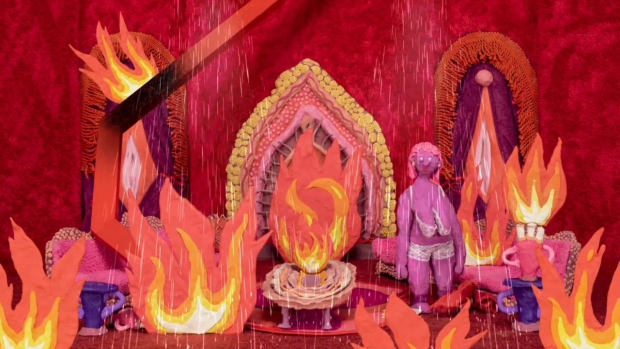 Framestore has shared with AWN some of the most beautiful and impactful animated sequences we’ve seen in years, from their work on Libresse & Bodyform’s #WombStories campaign. The studio partnered with creatives Nick & Nadja at advertising agency AMV BBDO as part of their female-led team; the 3-minute film, directed by Golden Globe winner and Emmy nominated Nisha Ganatra (Late Night), includes six animated sequences produced by Framestore, working over the course of three month, each featuring a different animation style chosen to depict the inner-worlds that act as reflections to the realities of the uterus. The film is designed to dispel myths, encourage a positive conversation, and address the life-changing moments in a woman’s life, from miscarriages and the menopause to endometriosis.

Framestore’s team was led by creative director Sharon Lock, who worked with Nick & Nadja to carefully select animation styles that would bring to life the emotions and unique perspectives of each story. Styles used included 2D cell techniques and stop-motion animation, as well as hand-painted images created with oil painted on glass. Lock directed the animated sequences as well as provided a creative center point for collaboration between the client, the agency and the team of artists.

Creatively, Lock explains, she was given a blank slate to start the project. “We started off brainstorming with the creatives, considering a huge variation of styles and techniques,” the director says. “We knew we wanted to create something really beautiful, with individual looks for each story. We needed animation styles that could convey the emotion and feelings of each subject in a short space of time on screen; we were telling stories that resonate with women everywhere, and their experiences, which are such a big part of who they are as women. We really wanted to spend the time selecting and putting together animation styles which stood alone but also worked together with the other stories.”

In bringing together the different visual styles into a single cohesive and powerful film, Lock adds, “It was important that the animations produced for this film not only looked as good as possible but also made an emotional impact on audiences because of the nature of the film.” Lock also notes that craft, such as the exacting stop-motion and paint on glass techniques employed, was key in conveying the film’s different emotional stories, sharing that “to evoke the correct message and emotion of what we were telling, the animation needed to be very carefully considered and carry the weight of the story.” Regarding the challenge of producing animation that matched the tone of each story, Lock acknowledges that “the chosen animation styles and techniques may have been hard and time consuming but were worth every minute to get the right emotion across.”

“We had such a range of emotions that were a big part of this project, discussing such important subjects which had to be conveyed correctly,” Lock continues. “We always had to remember the balance of what these topics would mean for one person versus another; we had meetings where we would all be laughing hysterically one minute and then be so destroyed emotionally by what we were discussing. Those initial brainstorms were the most challenging in order to get it right, but so rewarding and all-consuming working together to find our way.”

The team at Framestore, which included producers Niamh O’Donohoe and Emma Cook, was part of the film’s predominantly female cast and crew, something that they felt made a big difference in creating something that was honest and powerful. “We were telling real stories about the experiences of being a woman so having the team we did meant we had something of a shorthand,” O’Donohoe says. “We could easily communicate what we needed because there was a mutual understanding of how these stories had to be presented, something that I feel beautifully reflects the messages that Libresse/Bodyform is always communicating.” Framestore also delivered invisible VFX work for the film’s live-action segments and created a world of uteri which represents the billions of women who are a part of the Libresse’s/Bodyform’s story. These visuals are featured in the opening and closing sequences that will become the brand’s main visual for this campaign.

“It was important that everyone worked really closely together to make sure every frame did its part in telling the stories and I think the final piece speaks for itself,” Lock concludes. “It was amazing to be part of such an inspiring and creative campaign.” ‘The Legend of Vox Machina’: A Dream Project Made by Loyal Fans and Long-Time Friends
A One-Eyed Weasel and a Couple of Possums Walk into a Dino Den…
Method Studios Walks Us Through History for ‘Eternals’ End Credits
‘Dune’: The Inner Workings of Ornithopters, Sand Worms, and Creative Moviemaking
Re-VIEW: ‘Encanto’ - Seeking Beauty in Truth
WetaFX Delivers a Monstrous 3rd Act for ‘Shang-Chi and the Legend of the Ten Rings’
‘The Spine of Night’: Redefining Fantasy and Animated Filmmaking
Plague Diversions: Gazing at the Shortlist for the Best Animated Short Oscar
END_OF_DOCUMENT_TOKEN_TO_BE_REPLACED