Creator Steve Dildarian talks about his new adult animated comedy, about a kid trying to understand his world, who isn’t exactly helped by the adults in his life, which premieres today on HBO Max. 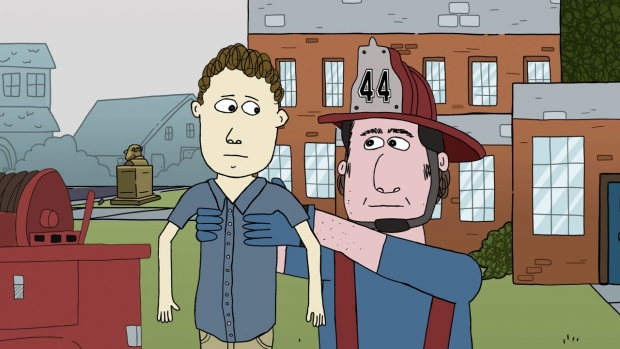 If you were a fan of The Life & Times of Tim (2008-12), or if you just think adults may not always be repositories of wisdom, or the best guides on the road of life, and that it’s about time that someone pointed out this shortcoming, then this is your lucky day. The 10-episode Max Original, Ten Year Old Tom, another emanation from the mind of Tim creator Steve Dildarian, debuts tonight, September 30, on HBO Max.

Executive produced and written by Dildarian, who also plays the eponymous lead character, Ten Year Old Tom is a mordantly funny adult animation series about “a kid who’s trying to make sense of the world around him,” and isn’t exactly being helped by the adults in his life. From litigious parents and drug-dealing bus drivers, to school administrators who want to sleep with Tom’s mom, the alleged authority figures on display are not exactly ideal role models.

In order to find out more about the background and production of the show, we asked Dildarian some questions, and fortunately, for the good of this story, he gave us some answers. AWN: What was the genesis of the show? Where did the idea come from?

Steve Dildarian: I got the idea from the nonstop headlines in the news about adults setting terrible examples for kids. In all aspects of life – sports, religion, business, politics, etc. – you can’t go one day without seeing an example of what not to do. I just thought it would be interesting to tell that story through the eyes of a little kid looking for a role model.

AWN: Did your work creating The Life and Times of Tim have a significant influence on the shape of Ten Year Old Tom?

SD: My instincts are pretty consistent throughout my work, so it’s inevitable that this show would have a similar style. It’s not a conscious decision, just a reflection of the choices I tend to make. That said, this is a more polished version of that look, with more fluid animation and more detailed artwork.

AWN: Both Tim and Tom utilize a fairly minimalist animation style. Where does that come from?

SD: The look in all my animated work stems from my first short film, Angry Unpaid Hooker, which I made with my girlfriend, Leynete [Cariapa]. Neither of us had done animation before, so it was made with BIC pens, Photoshop and iMovie. It was a rudimentary look that we stumbled on out of necessity, and it just suited the writing and voice work. We’ve evolved the look since then, but that general aesthetic still sets the tone. AWN: Where was the show produced?

SD: The show was made entirely during the pandemic, so we were scattered all over the place. Mostly Los Angeles was our hub, but people on the crew were also in Dallas, New York, and Portland, among other cities. And we had voice actors calling in from Hawaii, New Zealand, and some other places. So it’s hard to say exactly where the show was produced!

AWN: What was the most challenging part of the show’s development, narratively and/or stylistically?

SD: Keeping it separate from The Life & Times of Tim. Inevitably, people were going to make comparisons. So it was challenging to try to keep that out of mind, and just make decisions that feel right for this show, in this moment. If you’re looking backwards, it’s never a good thing.

AWN: What were the most challenging parts of the production itself?

SD: Recording the show with all the actors in different studios! The tech challenges were never-ending and it feels like a small miracle that we even got the show recorded. Many actors were crouched inside walk-in closets in their homes, setting up mikes and doing their own sound checks. AWN: How would you differentiate Ten Year Old Tom from the slew of adult animated series hitting streamers these days (with many more coming)?

SD: I honestly don’t watch a lot of other animated shows; I try to focus on my own work and hope it feels original. From what I know, the way we produce this show is fairly different from how most shows do it. We don’t use storyboards, we do lots of improv, and we edit the animatics using finished artwork instead of sketches. Hopefully it all adds up to a show that feels like it was produced a bit outside of the system.

AWN: Do you enjoy acting or writing/producing more on a show like this?

SD: Acting is the fun part, really, almost like a day off from the production. I enjoy writing too – when I have a good idea – but it’s definitely more work.