This year’s batch of Annie Award-nominated animated short films once again demonstrates that you’ll often find the most powerful storytelling in the smallest of packages. 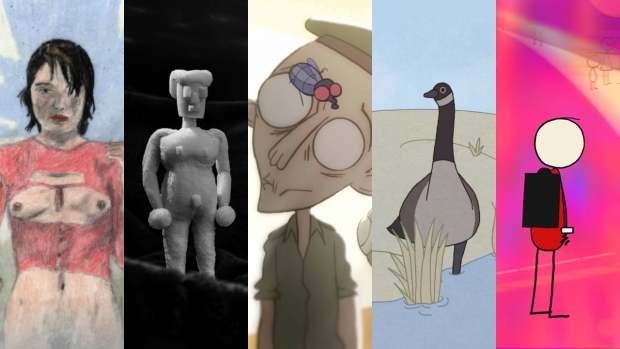 At ASIFA-Hollywood’s annual Annie Awards, as at many awards events and festivals, the most interesting work, and compelling storytelling, is often found in the shorts. That’s because, for one thing, they’re short. Faced with the constraint of saying everything one has to say in 40 minutes or less (usually considerably less), an animation director must marshal his or her forces (be they pixels or Styrofoam), focus their narrative, and jettison anything extraneous in order to produce a work for the ages. Moreover, one is more inclined to employ a labor-intensive and/or highly experimental technique if one’s goal is to produce 15 or 20 minutes – as opposed to, say, two hours – of animation.

And so we come to this year’s Annie Awards nominations for Best Short Subject. Two are in French, one in Korean; regardless of their language, these five films all take audiences on an emotional journey well worth the effort. Just a reminder, the 48th Annie Awards will take place in virtual form on April 16, 2021 – if you haven’t already secured your ticket, we encourage you to do so.

Going to meet your boyfriend’s parents for the first time is never an easy thing… but when you’re ambushed on the way and taken hostage by a band of women on horseback, it puts a considerably different spin on things. Lola Halifa-Legrand and Marie Jacotey’s hand-drawn film (written by Halifa-Legrand) explores themes of doubt, fear, and empowerment without taking itself overly seriously. With a distinctive visual style, sharp dialogue, and a soundtrack by the Parisian band Bagarre, Filles Bleues, Peur Blanche celebrates one’s ability to transcend the past in order to embrace the present.

While the film’s producers, Pierre Baussaron and Emmanuel-Alain Rayna, have multiple producing credits, together and separately, for the directors, this was their first effort in the animation medium. Halifa-Legrand and Jacotey both attended L’école Nationale Supérieure des Arts et Décoratifs in Paris and, later, the Royal College of Art, receiving degrees in visual communication and printmaking, respectively. Jacotey is known for her often-sardonic colored pencil drawings of female protagonists and has been exhibited in numerous galleries in both solo and group shows.

Filles Bleues, Peur Blanche Blue Fear had its premiere on October 4, 2020  at the Vila do Conde Short Film Festival in Portugal and was a nominee for Best Short Film at Cannes. Kangmin Kim’s black-and-white stop-motion short, which he considers the most personal film he’s made thus far, is a heartfelt paean to his mother, and an evocation of her dreams, which have corresponded to key events in his life. (Kkum means “dream” in Korean.) Kim’s medium of choice in the film is Styrofoam, which he sculpts into an array of sets, objects, and people, and the powerful effects he achieves belie the ordinariness of his material. With its gentle narration and striking visual style, KKUM touches on universal themes and often surprisingly deep emotions in its exploration of the bond between a mother and son.

Self-financed with a micro-budget of about $80, KKUM took Kim about two months to complete, using the facilities of Los Angeles-based stop-motion animation studio Open the Portal, where he has previously produced both commercial projects and his own films. The collaboration, which dates back to Kim’s student days at CalArts, where he first met Open the Portal’s co-founder David Braun, goes beyond access to equipment. The studio’s other founder, Barrett Slagle, does the sound and music for his films, and producer Jason Milov helps with promotion. What began as a film about the director’s grandfather and his experiences as a combatant during the French-Algerian war became, in the end, a movie about the director’s efforts to make a movie and an exploration of a complicated family relationship. Utilizing two different styles of mostly hand-drawn animation to tell his story, Bastien Dubois chronicles his struggle to unearth the truth about his grandfather’s role in this traumatic episode in France’s history, and to come to terms with his own feelings. The result is a painfully honest and moving film that allows the viewer to share the director’s journey and to recognize that, while the truth may be out there, finding it can be a mixed blessing.

Dubois spent more than ten years working on Souvenir, Souvenir, during which time the film and his relationship to it were constantly evolving. The final look of the film owes much to the work of Argentinian illustrator and comics artist Jorge Gonzalez, who provided the illustrations and textures that Dubois used for the backgrounds. The animation was produced at 3.0 Studio in Angoulême and Studio Train-Train in Lille.

Souvenir was released in France in October 2020 and had its U.S. premiere at the 2021 Sundance Film Festival, where it won the Short Film Jury Award. Bernardo Britto’s series of 2D animations (The Places Where We Live) produced for FX’s weekly short film showcase Cake comprises stories inspired by real people, places, or events throughout the country. Hudson Geese, which was included in Episode 2 of Cake’s third season, offers a bucolic fowl’s-eye-view of the birds’ yearly migration, until an unexpected event changes everything – including our perspective on the events of January 15, 2009. At once whimsical, funny, and deeply sad, Hudson Geese is a poignant reminder that we share the planet with other species and that humankind is not the measure of all things.

Bernardo Britto is the director of the AFI Fest Grand Jury Prize winner The Places Where We Lived (2013), from which the series takes its name, as well as the multi-award-winning films Yearbook (2014) and Glove (2016). Born in Rio de Janeiro, he grew up in South Florida, and graduated from NYU’s Tisch School of the Arts. In the third installment of Don Hertzfeld’s bleak, brilliant, and beloved sci-fi series, protagonist David Prime, who appeared briefly in the first episode, undertakes a perilous mission across time and space to solve a mystery involving his future selves. Coming in at an epic 34 minutes (the first and second episodes were 17 and 23 minutes, respectively), The Absent Destinations of David Prime functions as both a stand-alone story and a somewhat oblique continuation of the conundrums that went before. As with all of Hertzfeldt’s oeuvre, the film is both very funny and despairing, rather like life itself.

Hertzfeldt spent around two years making World of Tomorrow Episode Three. Among the challenges while he was writing it was having to figure out and keep track of when things were invented – like time-travel – in order to create a consistent chronology. He anticipates there will be future episodes of World of Tomorrow. He’s not sure when they might appear or exactly what direction they will take.

World of Tomorrow Episode Three was released on October 9, 2020. A Kickstarter campaign to fund the production of a Blu-ray edition of the entire series has raised about $455k to date.

WORLD OF TOMORROW EPISODE THREE: THE ABSENT DESTINATIONS OF DAVID PRIME from don hertzfeldt on Vimeo.

Taking an Old-School VFX Approach in ‘All Quiet on the Western Front’
‘Natural Habitat Shorts’: Like ‘Ranger Rick,’ But for Adults
Framestore Sets Sail on ‘1899’ with New Virtual Production Tools
Animated Characters: The Art of Babbitt – Part 1
Bruce Smith and Ralph Farquhar Talk ‘The Proud Family: Louder and Prouder’ Season 2
VFX is the ‘Thing’ for Tom Turnbull on Tim Burton’s ‘Wednesday’
We Need to Chat
F is for Flake: The (Not So) Great Animation Robbery?
END_OF_DOCUMENT_TOKEN_TO_BE_REPLACED