DreamWorks Animation’s 2D kids’ series, about the hilarious hijinks of a twig, strawberry, rock, and leaf living in the chaos of an unkept group of humans’ unkept backyard, has been nominated for Best Writing – TV/Media… with good reason. 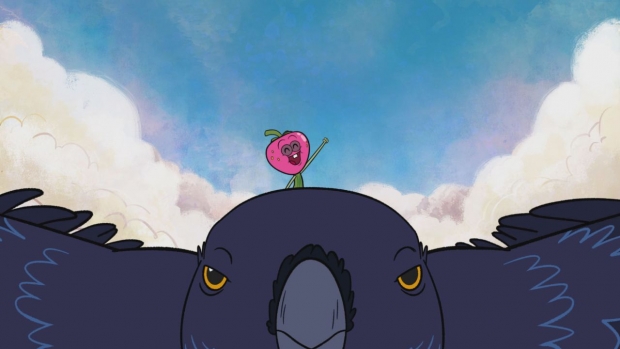 The Mighty Ones, DreamWorks Animation’s 2D-animated kids’ series created by Sunil Hall and Lynne Naylor, was definitely worthy of an Annie Award nomination. The show, starring a twig, strawberry, rock, and leaf as an energetic, dynamic group of friends adventuring in the backyard of some rather sloppy humans, has featured some fun, uniquely engaging content since its 2020 premiere – from scenes of toilet worship to discarded board games and ladybug wrangling.

Plus, the splashy, intentionally crude backgrounds and watercolor palettes, designed by a team led by art director Jenny Gase-Baker, give a gritty texture to the show that lends itself to the even grittier nature of the show’s unapologetically unfiltered characters. Now, at last, The Mighty Ones – currently streaming on Peacock and Hulu – has received an Annie Awards nomination for “Best Writing - TV/Media.” But the episode that garnered this nom - “Berry's Pet Threat” from Season 2 - while humorous, also displays a pretty twisted underbelly.

“Actually, Lynne had this nugget of an idea when we were in a writer's meeting one day,” remembers writer Jillian Goldfluss. “She thought it would be funny if Berry was friends with a big bird who wanted to eat her. Out of that, we came up with the idea of Berry being involved in a one-sided relationship. The creature she is infatuated with not only couldn't care less about her - and is probably not sentient - but also wants to devour her. Then, when we involved the other characters, we realized it was a toxic relationship.”

In the episode, Very Berry - one of the series’ main characters - becomes infatuated with a crow. Despite the bird making numerous attempts to take a bite out of Berry, or swallow the little strawberry whole, Berry is determined to make the relationship work. When Berry’s friends Rocksy, Twig, and Leaf try to warn Berry about her new friend, Berry becomes agitated and insists “Coco” be treated like one of the gang. Not surprisingly, chaos ensues as Coco attempts to use and abuse not only Berry, but Berry’s friends as well - using Twig and Leaf as accessories for her nest while using Rocksy to break open food. “Berry is so blinded by her love for this bird that she can't see how dangerous and unhealthy the relationship is, even though her friends are telling her as much,” says Goldfluss. “She just won't hear it. It's such an adult, and honestly pretty dark, concept. But I'm so glad we were able to make it digestible and entertaining for kids.”

Fellow writer Erica 'Jonesy' Jones, who storyboarded and co-directed the episode, says that balancing the tasteful side of a “fruit/bird intimacy” was a unique challenge, especially as a message geared toward a very young audience. But that’s where the humor - long established with The Mighty Ones series over the past year-and-a-half - comes in.

“I thought we were telling the tragic and complicated story of a doomed romance betwixt crow and berry,” says Jones. “But after the pitch, everyone was laughing and coming up to us to say how funny it was! I like to think, as these episodes have moved along, we earned the studio’s trust. They let us spread our wings and get weirder and weirder. And, with every episode, we descended deeper into madness.” But that madness is also creating a space for kids to not only laugh but learn valuable life lessons some adults haven’t even have figured out yet.

“Kids can tell when you're dumbing things down for them, and I think this show is both fun and challenging in ways,” says Goldfluss. “A kid might not fully be able to articulate how painful a one-sided friendship or relationship can be, but I think ‘Berry's Pet Threat’ explores those complexities in a comedic and unconventional way.”

She adds, “When I was really young, I was in a few toxic friendships. I was giving way more than I was getting in return, and it was really devastating. It would be nice to think that behind the gags and the quirk, this episode could strike a chord with kids who feel similarly neglected or taken advantage of by people they idolize.” For Nicolette Wood, another writer and storyboarder on the episode who has worked with Jones and Goldfluss on the series since Season 1, believes the show’s success also comes from its animated take on very real concepts in nature - such as how crows often use rocks to break open their food or dip their food in water to soften it for easier digestion. This particular tidbit is demonstrated when Coco practically drowns Berry in a puddle and Berry insists its just the bird’s way of giving her a bath.

“I think what makes this show so great is how much it breaks and pushes the laws of reality in a refreshingly cartoony way,” says Wood. “For this specific episode, I did look up real-life crow behaviors so that Coco’s actions are comically grounded in her unintentionally harming these friends by being her wild natural self. Adding that extra layer made everything even more hilarious and the dialogue more fun.”

Overall, the team says this Annie nomination has validated - though board-driven shows are still relatively new for DreamWorks - that there is an audience for these “weird, original shows,” as stated by Goldfluss. “I'm so hyped,” she continues. “When I was first brought onto this show I was so impressed by how outrageous, hilarious, and unique it felt. The creators, Lynne Naylor and Sunil Hall, had such a quirky and esoteric vision for the show and I was so excited to be able to write on it. And it feels like The Mighty Ones gets away with more cynicism and body gags -- impaling, dismembering, slapping, smooshing, etcetera. I'm honestly shocked with how far DreamWorks let us take certain things. In the very best way of course.” Jones adds, “The entirety of The Mighty Ones crew is so wickedly talented, supportive and smart. I think they were all built in a lab? The point is, The Mighty Ones deserves a hundred Annie Award Nominations but if Jill, Nicolette, and I must bear the responsibility of being today’s Golden Children… So be it.”

The Annie Awards will stream live on Saturday, March 12 at 7 p.m. Pacific Time. All The Mighty Ones episodes can be streamed on Peacock and Hulu.

Animated Characters: The Art of Babbitt – Part 1
Bruce Smith and Ralph Farquhar Talk ‘The Proud Family: Louder and Prouder’ Season 2
VFX is the ‘Thing’ for Tom Turnbull on Tim Burton’s ‘Wednesday’
We Need to Chat
Choc Chip Animation Riffs on Pop Culture in ‘The Art of Murder’
F is for Flake: The (Not So) Great Animation Robbery?
Re-VIEW: ‘Avatar: The Way of Water’ – A Miraculous Vision
‘Kung Fu Panda: The Dragon Knight’ Celebrates a Special Lunar New Year
END_OF_DOCUMENT_TOKEN_TO_BE_REPLACED