A Filmmaker’s Journey to Honor a Loved One in 'Uncle Thomas: Accounting for the Days'

The award-winning filmmaker shares the story behind her latest film, a mixed media, stop-motion and hand-drawn ode to a cherished uncle. 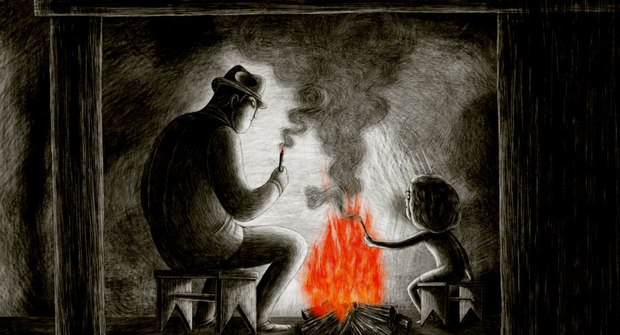 A young girl’s special relationship with a cherished uncle is explored in Regina Pessoa’s latest short film, Uncle Thomas: Accounting for the Days, which won a jury award at the Annecy International Animation Film Festival after its premiere. The film has also won 17 other awards to date. Using mixed media, digital drawing and stop-motion animation, Pessoa shares her memories of a man who was a poet, an eccentric and a good friend to her when she needed it most.

“To others, you were nobody. But to me, you were extraordinary. You were… the first person to whom I’d run when I needed help,” recounts Pessoa in the film.

Pessoa, who wrote, designed, narrated and directed the film, was born in Coimbra, Portugal, and grew up in a nearby small rural village. She currently lives in Porto, a coastal city in the country’s northwest region. Pessoa studied animation at the Porto School of Fine Arts and has directed three award-winning short films: The Night (1999), Tragic Story with Happy Ending (2005) and Kali the Little Vampire (2012).

Uncle Thomas: Accounting for the Days (Trailer – English) from NFB/marketing on Vimeo.

With the 13-minute Uncle Thomas, which was co-produced by Ciclope Filmes, the National Film Board of Canada and Les Armateurs, Pessoa artfully combines her distinctive animated engraving technique with stop-motion to capture the haunting textures and movement in her images. Incorporating her uncle’s personal documents and re-creating the drawings the two did together on her grandmother’s walls using charcoal sticks from the fireplace, Pessoa reconstructs her childhood memories in a moving tribute to her Tio Tomás.

Pessoa spent about three years developing the project, during which time she worked intensively to flesh out the film’s storyboard and animation techniques. Basic animation was done in France, while the 22-month production began in 2017 in Portugal. Post-production was done in Montreal. We asked Pessoa for a peek into how this very personal story came to life. I had all this material from my uncle, and I wanted to make a film about him, but I was lost and didn’t know how to start. A friend of mine suggested I write the letter to my uncle - even if I would never use it - to help me find the mood, the recall and the scenes I wanted to develop. So, I wrote that letter and it worked. My producers said I should incorporate segments of the letter in the film using voiceover. But when I tried working with an actress, I heard someone else speaking my feelings aloud, and it was very strange. It felt like my story was getting away from me, and I couldn’t feel it the same way anymore. We then agreed that it should be my voice, and even though I don’t really like my voice, it was impossible to have someone else speaking my words. Then, when we were editing the animatic and creating reference sounds, I needed a voice for my uncle, and (my partner, editor and co-producer) Abi Feijó read the text. He was so good, and it really worked. A drawing on the wall sparks an idea

I used my memories of drawing on the walls of my grandmother’s house as a departure point, and I used Uncle Thomas’s notes, journal entries and possessions to develop my own visual language and mix of animation techniques. When I start a project, I don’t usually think like an animator, calculating how many drawings I need. I knew I wanted to play with textures, light and shadow, and mix the personal visual look I’d already developed in my previous films.

I also wanted to pay homage to my uncle, a humble yet eccentric man who led a simple, anonymous life. You don’t have to do extraordinary things to be important to someone; that was my motivation. He was a good man, and it was with him that I learned how to draw. A final goodbye, and a treasure trove of objects brought to life

The last time I spoke to my Uncle Thomas was in 2005. I was in France making one of my films, Tragic Story with Happy Ending. I called my mom as usual and he was there, keeping her company. I was happy to talk with him and I used our exact conversation in the film: I told him I loved him, and he said, ‘Of course; we all love each other.’ He was pleased to hear that, but like many people from his generation who weren’t used to expressing their feelings out loud, he was also a little embarrassed. It was so sweet. I never saw him again; one week later, he passed away.

I managed to save some of his belongings, and I already had the intention to use them later. It wasn’t complicated to find a way to integrate the different universes, which was really exciting when I saw very quickly that it could work. By the time I finished the research and storyboard, I already had done a lot of technical animated tests. From the beginning, I knew I wanted to use mixed media, since the film is based on real facts, a real person and my connection to him. It’s curious, because sometimes it’s not the image of the drawing that takes me back, but the sound of this charcoal on the wall. It’s a special sound, and I think it’s what really wakes up those faraway memories right now.

Because I wanted to use my uncle’s objects, it was clear I would need some stop-motion, but I was not at all clear about how to proceed. Having time to prepare before the official production was very important, so I could understand how to combine the different visual universes in a coherent way with my personal style. Once production started, we could proceed with no gaps. My Canadian producer, Julie Roy, thought we should try a different set-up for our production, in order to not replicate the same formula as my previous films. She proposed sending Canadian animators and stop-motion animators here to Portugal for three months to develop those scenes. And that’s what we did. They came with their kids and they stayed here. Everything was already planned. We had already built a real set with walls and the window, so everything was ready when they arrived. They were so good and everything went so well. Pops of red that capture emotion

My films are quite monochromatic, and I enjoy using a very restricted color palette. I use this red - for the poppy, the pencil my uncle gives me, the matches, the fire - for several reasons. One is because my uncle’s writings are original papers in blue or black ink, but there were red numbers and lines. There’s also the symbolic meaning of the color red: I recently came across a scholarly article about fairy tales that claimed red represented the loss of innocence. I have wondered if, in my case, my film means the same thing. Uncle Thomas was always wearing a hat; it was like a part of his body. Showing him putting a second hat over the first was a visual redundancy, to emphasize the fact that he took care of how he dressed and how he appeared to people. Making all the eyes white was a specific intention, because they represent memory. Those people are no longer here - not even the little girl that was me. She doesn’t exist anymore. So that’s why I erased the pupils. I wanted the eyesight empty, because they are all somehow ghosts from the past. Recapturing one perfect moment in time

My favourite segment in the film is the motorbike ride. I remember it was such a lovely day in May in Portugal - the Day of Ascension, when families go to the countryside and have picnics. I was around seven years old, and Uncle Thomas took me on his motorbike through the fields, and we picked our poppies; on that day, it’s a tradition to pick a poppy, an olive branch and some wheat.

These days, we have so many new technologies, including augmented reality, and I wanted to use augmented memory in opposition. I used my point of view in the film, taking inspiration from the village where we lived, but I didn’t want to use real footage. And I also didn’t want to use a 3D setup, because I prefer to draw by hand and keep the little mistakes and the not-so-accurate perspectives. It’s more charming for me and more like the feeling we have in memories: the movement is not very precise. I enjoyed that day in the field so much, with the wind in my face, the walk and all the emotion.