Fighting Poverty and Fate to Survive: Yo Moriyama’s ‘Megalobox’

Available on Crunchyroll and as a special edition Blu-ray box set, TMS Entertainment’s anime series about a boxer in a dystopian future pays homage to Ikki Kajiwara’s iconic 1968 manga. 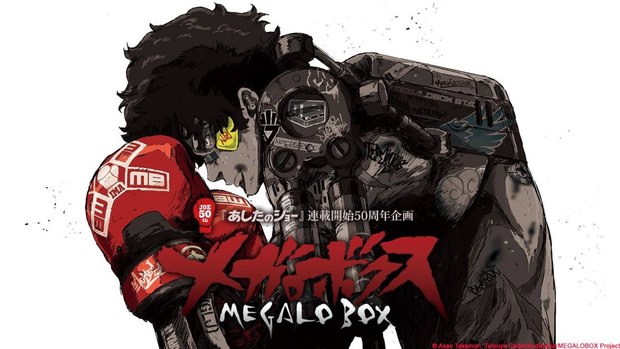 With award season around the corner, and the competition to get noticed heating up, its worth taking a look at one particularly stirring and popular anime series, TMS Entertainment’s Megalobox, currently available to stream on Crunchyroll after a broadcast run on Toonami that ended earlier this year.

Based on the iconic manga, “Ashita no Joe,” (“Tomorrow's Joe,”), written in 1968 by Ikki Kajiwara under the pen name Asao Takamori, the 13-episode Megalobox, directed by Yo Moriyama and produced by Minako Fujiyoshi, tells the story of how one boxer lives out his life against a backdrop of a dystopian near-future society. Known only by his ring name, “Junk Dog” and for how he rigs Megalo Boxing matches with his buddy, Gansaku Nanbu, JD soon crosses paths with Yuri, the reigning champion, and their rivalry begins.

The project, originally intended as a 50th anniversary homage honoring the original manga series, Megalobox has grown to be much more.

“I thought it would be meaningless to simply remake this work that had already been animated in the past,” Moriyama shares. “So, it was reimagined as an original story based on the idea of depicting ‘the most brilliant moment of one’s life.’”

It was very important to Moriyama that the vision for the project stayed true to its Manga origins. His production team had to be consistent in dealing with, and subsequent execution, of this unique worldview. “Of course, there may be cases where a large animation team is conductive to producing many good ideas,” Moriyama explains. “But this also runs the risk of having visuals and ideas that are difficult to express becoming convoluted. I thought that a smaller team was better suited for this project.”

On average, episodes took three months to produce; some episodes, however, were particularly involved and took more than half a year to complete. Moriyama wrote the scripts himself, while working directly with teams handling concept design, characters and props, providing ultimate creative influence in the choices that shaped the production.

“I wanted to build a world of Megalobox with my favorite designs, so I was always drawing,” the director notes. “I think most of the ideas came from movies that I have seen. I especially like movies that I had seen on VHS; I get a very strong feeling from them, so I experimented with Megalobox to reproduce the atmosphere of that video image quality.” As with all remakes of venerated properties, challenges arose in the reimagining of “Tomorrow’s Joe.” “It’s a struggle to not betray the fans of ‘Tomorrow's Joe’ and to make something new,” Moriyama continues. “There may not be a right answer as to what the right balance is, but I wanted to make sure that the story was not compromised in any way.”

Special attention was given to the various genres and techniques used with the goal of capturing the essence of the property’s origins. Megalobox, is a moving series and a testament to its predecessor. The show deftly explores the moral dilemma of whether to acquiesce and accept one’s fate or to resist and fight on towards something greater, something to believe in.

In time for the holidays, TMS Entertainment and VIZ have released a special edition Season 1 Megalobox Blu-ray set, which is now available. Animated Characters: The Art of Babbitt – Part 1
Bruce Smith and Ralph Farquhar Talk ‘The Proud Family: Louder and Prouder’ Season 2
VFX is the ‘Thing’ for Tom Turnbull on Tim Burton’s ‘Wednesday’
We Need to Chat
Choc Chip Animation Riffs on Pop Culture in ‘The Art of Murder’
F is for Flake: The (Not So) Great Animation Robbery?
Re-VIEW: ‘Avatar: The Way of Water’ – A Miraculous Vision
‘Kung Fu Panda: The Dragon Knight’ Celebrates a Special Lunar New Year
END_OF_DOCUMENT_TOKEN_TO_BE_REPLACED