One of the editors on FOX’s hit animated comedy discusses her unlikely landing of the coveted job, and how as a wife and working mom she relates to the show’s family-centered humor. 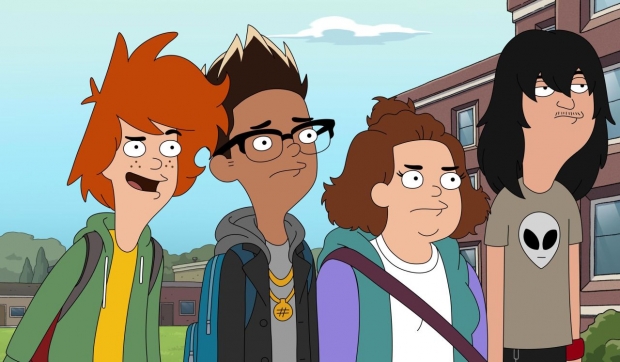 Look closely, and you can find other parallels between the series and Parks and Rec; Duncanville’s Witch Day reflects the Harvest Festival of Parks and Rec, and Duncan’s infatuation with the cool, level-headed Mia suggests a tip-of-the-hat to the tight-knit friendship and humorous compliments between Leslie and Anne.

While Duncanville, now renewed for a second season, amplifies the incredible imagination of children anxious to stand out and make their mark on the world, the show also highlights the humorous happenings of family life, from coming-of-age teen drama to sibling rivalries and parental phenomena. We recently spoke with one of the show’s editor, Nina Helene Hirten, who took a seemingly circuitous route from working as a previs editor at The Third Floor on films like Godzilla: King of the Monsters, Venom and Ant-Man and The Wasp, to editing a primetime animated sitcom. Hirten talked with AWN about her unlikely landing of the Duncanville job, how she relates to the show as a wife and working mom, and the promising future of animation amid the COVID-19 pandemic. Victoria Davis: So much of your work has consisted of live-action films like Godzilla, Venom and Christopher Robin. What interested you about getting involved with Duncanville?

Nina Helene Hirten: I was just starting to ramp down on Curious George: Royal Monkey and I was tentatively planning to go back to Curious George for the next movie. But that wasn’t going to be for a couple of months yet, so I was shopping around for hiatus work and Duncanville popped up on my feed and I applied, not really knowing what it was. I just saw it was an unnamed show at Bento Box Entertainment. When I went in for the first interview, and they told me what the show was, I laughed and thought, “Yeah, I’m really not going to get this job.”

VD: What made you think that? NH: Like you said, most of my experience was in movies and promos and music videos. TV shows, in many ways, are a different ball game and this was a pretty major show. I’m a huge fan of Amy Poehler and Parks and Rec and I honestly didn’t think I was qualified. But, much to my surprise, I was called back for a second interview with the Scullys, which was daunting too because they are major veteran animation people. And sure enough, the next week, I got offered the job and I knew I couldn’t not take it. To work with the Scullys and this awesome cast, it was exciting.

VD: You’ve obviously worked on animation before with Curious George and Piney: The Lonesome Pine, but was there a big learning curve that came with editing animated television series like this for the first time, with such different styled animation?

NH: I’m surprised there wasn’t more of a learning curve with the actual animation. I was certainly expecting one. But this show has more people that give notes than any other project I’ve worked on, apart from a Marvel movie. For Duncanville, I have to answer for the Scully’s notes as well as the director’s notes, but we also must pay attention to what Amy and FOX has to say.

So, there are also a lot more rewrites; we even continue to do rewrites after the first pass of animation. So, if something’s not working with the animation, the writers will tear it apart to see what’s allowable within the budget to rework. We’ve had a few rewrites that are drastic enough that scenes couldn’t just be fixed in editing and needed to go back to the drawing board after color and be reanimated. So, it’s a fast-moving show, with a lot of moving parts and a lot of people to please. But, it’s really fun. I like it.

VD: The show almost has a Simpsons vibe to it with the way the scenes move so quickly. In Curious George, even though it’s 2D animation, the movements are very fluid. But Duncanville is very stop-and-go and the movements and camera angle changes are paralleled with the quick wit on the show. The camera really emphasizes the emotions of the characters. How do you approach editing scenes like that?

NH: In a lot of ways, I approach it like a live-action sitcom, except with more flexibility since it’s all drawn. So, there are a couple things I can do in editorial that add to that camera work, but ultimately it comes down to the directors if they want to zoom in on a character quickly like that or not. But I do love how quick the animation is and while my personal editing style is not so ADD, it’s cool to be able to work on a show that is like that. There’s so much movement and that’s a big comment I get from people who watch the show, including my husband, that they like how quick it is. There’s no lag at all.

I’ve actually started to have a different mentality for other show’s I’m currently working on, like “Would this be funnier if it were faster? Should we make this snappier?” I also haven’t gotten a chance to work in comedy much during my career so far and it was great to be able to play around with what felt the funniest. So, Duncanville has informed my editing style for other projects that way. VD: Some categorize Duncanville as adult animation, while others say it’s more family-focused comedy. Do you think the show’s wide demographic makes it unique in its own right? What makes it stand out above the animation crowd?

NH: That’s certainly one of the things I liked about it. It’s not really aimed at any particular age group. I really feel like anyone could sit and watch this show and get a chuckle out of it. But the general likability of the characters is also a big thing. The humor in the show really isn’t offensive, but it’s also not made only for kids.

Because it’s such a broad-strokes kind of show, and yet still current and funny, and the characters are all well-defined, I think that makes it easy to connect with. Everyone I’ve talked to has a favorite character on this show, even if they’ve only seen one or two episodes. When you’ve only watched a handful of episodes of a show and that show gets you to remember a character that you like, then I think the show is doing something right.

VD: Do you have any favorite characters as well? Or favorite episodes that you really enjoyed editing?

NH: I really loved “Judge Annie.” The story was really cohesive, and it felt well-written in the sense that all the loose ends were tied up. Everyone had a resolution. Plus, it had Judge Judy in it, played by Judge Judy, and who wouldn’t love that? I also really enjoyed working on “Sister Wife” because it was very sweet, and Jing is definitely my favorite character, so having a lot more of her to play with was really fun.

She’s just a funny character and I love her energy and bounciness. Jing reminds me of my kids too in her creativity. My eldest is a big storyteller, always coming up with these amazing scenarios and stories and characters and Jing totally lives in her own little world in so many ways. She also makes funny comments when you don’t expect it and I know a lot of kids do that, but my daughter does that too. VD: Duncanville is one of the COVID pandemic success stories in the animation industry, having released in February of this year. And there’s been so much animation that’s been releasing on both networks and streaming services because it’s something that can be created successfully even with everyone working from home. Do you think that, amidst this pandemic, this is animation’s time to shine?

NH: I totally agree, but there was definitely an animation boom coming since before the pandemic and, in a strange happenstance, it worked out that as all these productions were about to get rolling, the pandemic hit. So, everyone has had to adjust to the working from home thing and, you’re right, animation is totally something that can be done at home. Everyone in animation is still rolling and all my live-action friends are just kind of sitting on their hands waiting for the green light.

Bento Box was bought by FOX earlier last year before the pandemic and just before that Netflix opened a whole animation wing and greenlit a bunch of animated productions on their side. So, there’s been tons of animation coming our way for a while and the pandemic just blew it up even more.

VD: In the show, the character of Duncan is an average 15-year-old with an above-average imagination that allows him to be above average inside that imagination and that’s what animation does for life in general. It takes an average circumstance and amplifies every emotion and visual. Being a wife and a mom yourself, is there even more to appreciate in an animation like this for those who are living that family life every day?

NH: Oh man, yes. I can’t say a lot about Season 2, but I will say that the episodes I have been at the table reads for, I’m just so excited about. I 100% am like, “This is my life in a script.” Maybe not as zany, and I’m definitely not as funny as Amy Poehler, but the first two episodes are 100% relatable as a mom. I’m so looking forward to other moms out there seeing them and relating to it.

Duncanville Season 2 will premiere on FOX in the spring of 2021.

Taking an Old-School VFX Approach in ‘All Quiet on the Western Front’
‘Natural Habitat Shorts’: Like ‘Ranger Rick,’ But for Adults
Framestore Sets Sail on ‘1899’ with New Virtual Production Tools
Animated Characters: The Art of Babbitt – Part 1
Bruce Smith and Ralph Farquhar Talk ‘The Proud Family: Louder and Prouder’ Season 2
VFX is the ‘Thing’ for Tom Turnbull on Tim Burton’s ‘Wednesday’
We Need to Chat
F is for Flake: The (Not So) Great Animation Robbery?
END_OF_DOCUMENT_TOKEN_TO_BE_REPLACED