Matthew A. Cherry’s delightful and touching ode to a dad’s brave attempt at taming his daughter’s unruly hair shows that diverse stories can resonate with the “parent” and “kid” in all of us. 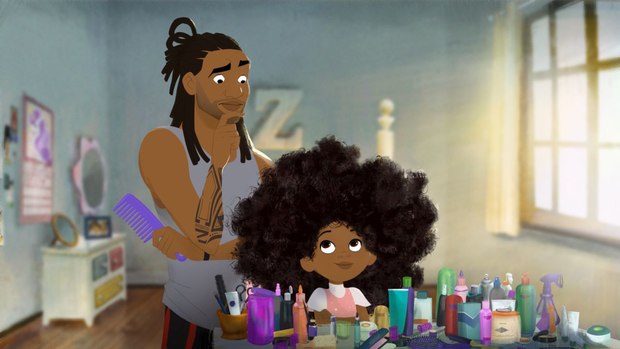 Released in theatres along with The Angry Birds Movie 2 this past August, Hair Love, a funny, poignant and socially relevant animated short film from director Matthew A. Cherry, tells the story of an African American father’s valiant attempt to style his daughter’s beautiful but wild head of hair.

For Cherry, Hair Love is his first animated project, though he’s been working in Hollywood for over 12 years in a wide range of roles on an even wider range of projects. One thing worth noting about Cherry is what he did for a living in-between graduating with a degree in radio and TV broadcasting from University of Akron, and taking his first job as a production assistant on a commercial back in 2007; he played wide-receiver for the Jacksonville Jaguars, Cincinnati Bengals, Carolina Panthers and Baltimore Ravens of the NFL.

But what’s even more interesting about Cherry than his pro football background is his path to becoming a Hollywood director. “I always knew that when I finished playing sports, I’d get into production,” he shares. “I just didn't know how. I happened to meet somebody who was part of this PA training program called Streetlights. And I thought, ‘All right, this is how I’m going to get a foot in the door.’ For me, it really was important to learn the business from the ground up. In the back of my mind, I always considered stereotypes that people have of athletes trying to move beyond sports; they’re trying to move into rapping or acting, and they're always met with skepticism. For me, I didn't want that. I wanted people to know that I'm serious about this and I'm willing to start on the bottom floor, learn, and build my career up from there. I never expected anything to be handed to me.”

Recently, Cherry was an executive at Jordan Peele’s production company, Monkeypaw, with directing credits on live-action TV shows like The Last OG, Whiskey Cavalier and The Red Line, as well as an executive producing credit on Spike Lee’s BlacKkKlansman, under his belt. But Hair Love took the director into the medium of animation for the very first time. Fueled by a $300,000 Kickstarter campaign back in 2017, the most money ever raised on the crowd-funding platform for a short film, Cherry enlisted a number of talented animation industry friends to help make the film in their spare time.

“Being my first foray into animation, I wanted to do something that hopefully would do the medium justice,” he notes. “We're really proud of the final film. We put a lot of time into developing the story and making sure that, hopefully, it connects with people. And we always joked that we got probably 90% of all the black people that work in animation to work on this. Between Peter [Ramsey], Bruce [Smith], Everett [Downing Jr.], Frank Abney and Karen Toliver, we definitely had a great mix of folks.”

Once Sony Pictures Animation picked up the film last March with an eye towards screening alongside Angry Birds 2, the core team’s free time was even more critically important… and soon in short supply. “We found out in April that [playing in front of] Angry Birds 2 was a real possibility,” Cherry explains. “I don't even think we had really started production on the short yet. We were still in the animatic phase, which meant it was a mad dash to get it done. That was probably our biggest challenge. Remember, we all worked regular 9-5 five jobs too. I was at Monkeypaw. Karen is a head of creative at Sony Pictures Animation. Bruce and everybody else, they're working on their shows during the day. So, we could only get on this between 6 and 9 o'clock at night; we couldn't go too late because people have families and other things too. So, we pulled this all together in a few months!”

Cherry’s original vision for Hair Love came from a desire to tackle a lack of family stories depicting African American fathers in a way he felt was important, but largely missing from mainstream entertainment. As he describes, “I was coming across a lot of viral videos of dads playing with their kids. Specifically, black dads. I always loved sharing these family videos. For whatever reason, the videos of dads playing with their daughters would always over-perform. And the videos of dads doing their daughter's hair? The numbers were insane. Those will do like a hundred thousand retweets, a hundred thousand likes, just crazy numbers on social media.”

“But I soon found it was a bit of a double-edged sword,” he continues. “Of course, the videos are cute and touching in their own unique way. But [in the entertainment world], people aren’t used to seeing black fathers interacting with their kids in this way. Specifically, their daughters. Mainstream media is always quick to depict black dads as nonexistent, deadbeat, all these different kinds of stereotypes you've seen in movies. So, to see a black father doing something, I guess, gender bending in some people's opinions - doing his daughter's hair - that was an anomaly.”

Though Cherry himself doesn’t yet have children, he has a number of friends who do. Watching them play with their kids, especially dads play with their daughters, had a big impact. “I have a lot of young friends that are fathers, and they are some of the most loving and giving people you'd ever see,” he says. “They would do anything for their kids, specifically their daughters. Like, they would do a tea party, paint their nails, dress up as all sorts of things… you know what I mean? They would literally do whatever their kids asked. It feels pretty normal.”

“Today, both parents often work, which means sometimes mom has to go to work early while dad has to get the kids ready for school, a burden society typically used to place on a woman's shoulders,” he states. “But today, it feels like these roles have been evening out. And I really wanted to represent a modern family, where it’s just about getting things done and if I have to step up and do my daughter’s hair, I'll do it. And if my wife has to step up and do something in particular, she'll do it too. That's really where the story came from.”

With a career spent working on an impressive list of live-action commercials, music videos, shorts, TV series and feature projects, Cherry’s jump into animation at first seems an odd choice. But he was quite deliberate about the medium shift for his short. “For me, animation is a timeless, universal medium,” he notes. “Animation really stands the test of time. When I was a kid, Winnie the Pooh was my favorite movie. And I literally remember going to the video store and having my dad renew that rental so many times that the store owner just gave it to us. We’d probably paid for it five times over.”

However, as he got older, he realized families that looked like his were rarely depicted onscreen. “I saw a lot of animated movies at the theatre, and there were all different types of families watching,” he confides. “Not just white but black, Hispanic, Asian… who could all relate to the stories.  But, as far as the black characters in animation, I could literally count on one hand the number of black main characters that were actual people and not just minor characters or voices of animals. So, I wanted to create something that young girls could relate to and young men could kind of see themselves doing as well with regards to the father figure. And making this film in live-action wouldn't have had the same impact. Animation needs a lot more diversity, so I wanted to be a part of that kind of movement, of trying to help get these types of films to be a little bit more inclusive.”

Cherry also chose to animate his story because he was drawn to the detailed, storyboard-centric development process that would allow him to collaborate more extensively, early on, with his key colleagues. “I love the fact that in animation, you basically make the movie with storyboards and an animatic before you go into actual production,” he explains. “I've storyboarded before, but never like this, where you're making them move so you can walk through your movie in advance, and kind of see what works and what doesn't. I’ve got to say, this short took two years to make, and 90% of that was spent in development. We were constantly watching and re-watching the animatic, sharing it with Peter Ramsey and others in our close circle, getting feedback, sharing, showing, getting opinions from people we trust. ‘Man, what do you guys think? What's working? What's not working?’ Constantly refining it. So, that was a really cool part of the process for me. Especially with someone like Bruce Smith in the mix, who is just a legend in the game.”

Though Cherry’s initial goal was “to make the film in CG, to have it look more like animated projects of today,” he soon realized that capturing the look he was after was completely impractical given his budget constraints. Even with his historic Kickstarter haul. “After we hit and the exceeded our [Kickstarter] goal and figured out our final budget, I learned quickly that we wouldn’t have anywhere close to what we needed to really make it look good,” he concedes. “Working in the independent film space, quality is really important to me, and I hate when I watch movies and get taken out of the story because of technical quality issues for whatever reason. It's not lit properly or doesn't sound right. For me, quality is really important. So instead of trying to compete by choosing a low-level CG process, we figured, ‘Man, you know, maybe 2D would really make more sense.’”

Some of the most expensive CG animation you can produce is highly detailed hair, which could have proven problematic for a small budget film focused on a young child’s unruly mop. “Because hair is such an important piece of this short, if we had made the film in CG, we would've needed a couple million dollars to making it look half-way decent. So, we figured it would be nice to create something that harkens back to an older, traditional style of animation. We worked in Harmony, which ironically enough, none of us had ever worked in before.”

According to Cherry, Harmony gave them more than just the cartoony animation style you find in many animated TV series. “We knew that with 2D, we’d have to balance between being cartoony, like a lot of TV shows, and having the emotion that you don't normally see in a lot of cartoons. We wanted to be really specific with the emotions because it’s a black story. There are so many little nuances in there that we wanted to make sure to capture, like the fact that she's wearing a hair bonnet when she first wakes up; the specific type of comb that she's using, all the hair products that are on her counter when her dad is getting ready to do her hair. With all those details, 2D really made the most sense. And we really landed on this idea of making the backgrounds more painterly, but making her look, I guess, a little bit more cartoony, but charming enough to where her hair still had expression in it.”