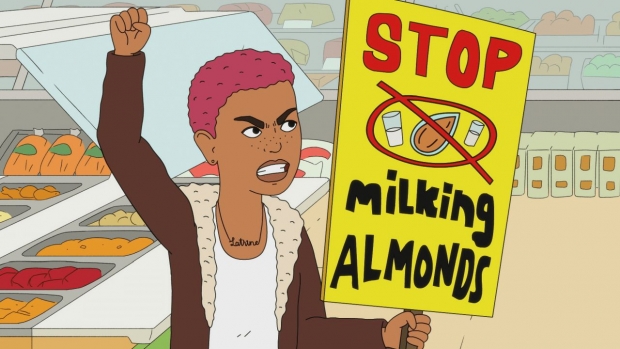 In a world where new T-shirt fads last a mere 24-hours, where phone calls are never the proper response to a text message, and where even the powerline pigeons are obsessed with the latest trends, it can be hard to find what’s actually “cool” in your own unique identity. Especially, if you’re an REI-enthusiast and Tom Hanks-fanboy from Oregon moving to one of L.A.’s hottest blocks.

But the message behind Prime Video’s new adult animated comedy series, Fairfax, which premieres today, is that, at the end of the day, being cool isn’t what counts. It’s not about how many Instagram followers you have, or the level of hype surrounding your newest sneakers. It’s about seeing your value in a world that worships valuables.

The story begins when middle-schooler Dale moves with his family from Oregon to the Fairfax District in central Los Angeles. New to the world of clout, Dale’s new west coast friends try to induct him into the Fairfax block of fame and train him in the ways of the trending.

While Fairfax focuses on the lives of Gen Z-ers, the stories are universal and the comedy relatable to anyone who remembers their own middle school angst. We got the chance to chat with Hausfater, Riley, and Buchsbaum about growing up on Fairfax Avenue, the inspiration behind the show’s retro design, their admiration for the inclusivity of younger generations, and how they’re still discovering “how to be cool.”

Victoria Davis: As your animated series debut, what made you three decide this was the story to bring to people? Did this spring from living in L.A. and seeing the growth of this kind of sneaker culture, or was there another catalyst that inspired the series?

Aaron Buchsbaum: We all grew up loitering on the block of Fairfax and we've watched Fairfax transform over the years. We watched it evolve into this hub of culture and it always fascinated us. And what we generally found was that most shows about L.A. seem to highlight Hollywood, and that was not our experience growing up. Fairfax definitely spoke more to our experience. All that, coupled with our fascination of Gen Z, and what it's like to be a kid today versus when we were kids growing up there, we felt like it made for the perfect animated television show.

Matthew Hausfater: We always liked the idea of an outsider coming into a world and his friends having to school him in the way of what's cool. Because, when we were growing up, there wasn't Instagram. Facebook came about when we were freshmen in college, but you really relied on your friends to come to school with like a cassette single of Nirvana or with a Shorty's
T-shirt, and you'd be like, ‘Wow, what's that?’ But now everything is available all the time. We wanted to show what it was like to be a kid based on our experiences while bringing that through the lens of 2021.

VD: This kind of show is so perfect for an adult-animated style of 2D. The colors, the line work, it’s so pleasing to look at and it all pays homage to that 90s kid vibe while at the same time still fits in with the current feel of living in L.A., which is a very animated city by itself. Was that colorful, retro animation style something you knew you wanted right off the bat to help drive the series?

Teddy Riley: We knew it was always an animated show. Nailing this tone wouldn't have worked in live-action. If it was live-action, it would be too sentimental or saccharin. With animation, we could go to places that heighten the emotion of what it feels like to be a teenager, where truly every day your coolness feels like it's life or death.

Shoutout to Somehoodlum and Titmouse who helped us develop the visual palette of the world that felt like the West Coast because, like you said, it feels so L.A. and we wanted a show that had those warm, pink-colored sunsets and palm trees that you see in the first episode.

AB: Somehoodlum’s style really utilizes pastels and that was something that we thought very nicely helped tell the story and visualize Los Angeles. And there are moments where it does have almost that washed feel, which brought out Los Angeles even more. VD: It also brings out these characters, whose personalities and personal styles are very eclectic and wild and animated in their own right.

AB: I mean, credit to Titmouse and Somehoodlum again for helping us land on how to best animate our characters and how to really bring the scripts to life. I think, on their end, having read all the scripts and seeing exactly where we wanted to go with it, they were able to advise us on, for example, wanting to use less lines in some of our characters so that we can really have them run, jump, fight, etc. It was a long process of figuring out how to best animate our characters so we could do everything we wanted to do.

TR: And, to the earlier part of your question, part of what drew us to Somehoodlum is that it felt really new and different. But it also did have a retro feel. And all three of us grew up loving shows like Recess, Hey Arnold! and Rocket Power. And to have a little bit of that familiarity with these characters again, hopefully brings a warmth to the world.

MH: We wanted our characters to feel like comfort food, but also like nothing you’ve ever seen. And Somehoodlum and Titmouse, they really nailed it and elevated it to our wildest dreams. And on top of that, because Fairfax has so many different people from all different walks of life, we wanted the characters, not just the main four, but every incidental that you see, to look different. And although we probably drove the team crazy, they went to extreme lengths to make this feel incredibly authentic.

VD: There’s a lot covered in just this first season, from being the new kid on the block to boyd image and having a crush. And there’s also a lot going on in the world today that the Gen Z generation is very involved in. How did you guys decide what hot topics you wanted to tackle first?

TR: Very early on, we realized a couple things. One of them was that if this show was just strictly about streetwear, it wouldn't last that long. The other thing we realized is, with animation, it takes a really long time. So we were very diligent in the writers room about poking holes and going, ‘Is this going to feel relevant by the time it comes out?’ And that led us to telling stories that looked at broader cultural trends, things like social media, eSports, music festival culture, that to us feel universal and are things we continue to interact with. And, obviously, we have a lot of young writers who helped provide a real authentic POV as to kind of how that middle school experience feels.

MH: We knew that we could have success telling stories that you may have seen, like wanting to go to the cool girl’s party in Episode 2. Or wanting to join the varsity team. Except now, to go to the cool girl’s party, you need 100 Instagram followers, and the varsity team is not football, it's eSports. We took these tried-and-true stories that people have been familiar with since John Hughes’ movies [came out] and we applied a 2021 filter to them. We relied heavily on our younger writers and friends and cousins and siblings to make sure that it had that level of authenticity. VD: You guys really nailed these narratives. I have five younger siblings and I’ve heard some of them have these kinds of conversations with their friends, which like you’ve said, are conversations we’ve all had, just with different generational filters. I was surprised how much I could still relate to and enjoy watching these kind of narratives now well into my adult years.

MH: That means a ton. The only people that we’ve talked to so far who have seen the show are Amazon, our wives and our parents. So, this is so nice to hear.

VD: It’s fantastic. And I have to ask, was it a bit cathartic getting to work on this series, having observed so many of these things first-hand living in L.A. and getting to finally put some laughs to these topics?

TR: Totally. Once we created our own definition of what “Fairfax” meant, it was impossible not to send each other articles about things, like when the second wave of NFTs became a thing. We all were like, ‘Well, this is Fairfax. We don’t have an episode about that one yet, but there are so many things that people would text us about, or that we’d send to our writers during the season, that just felt like Fairfax.

AB: We also talked a lot about how Gen Z is the most inclusive generation. So when we were bringing Dale into the world of Fairfax, we knew that we didn't want this to be like a ‘Will he or won't he make the group?’ sort of thing. The first thing these kids in Fairfax do is take him on. And that was important to us, that their instinct is to welcome and not to push away. That’s something we really admire about Gen Z today and in wanting to make sure was visible in our show. VD: With this show able to appeal to so many different generations and people from all kinds of backgrounds and cultures, what do you hope audiences take away after watching the series?

MH: The message is one that we are still learning ourselves, that to be cool is to be authentically who you are, whether that is a normcore kid from Oregon who loves hiking, or a sneakerhead like Benny, or an artsy-fartsy guy like Truman. Whoever you are, be yourself. Hopefully you watch this show, no matter what age you are, and realize that, to be authentic, or to be cool, is being happy about who you are and what you're presenting to the world. It sounds like fluff, but it's really the truth.

When I was thirteen, I did not think I was cool. I had big ears. I had glasses. I used to wear cologne to school because I thought that made me cool. Everybody goes through a phase in their life and wants to be something greater than they are. And hopefully, like the kids in Fairfax, you have a great group of friends to rely on to help you get there.