Dive into enlightenment with the first project to emerge from the studio’s newly-launched shorts program in AWN’s exclusive video and accompanying interview with director William Salazar. 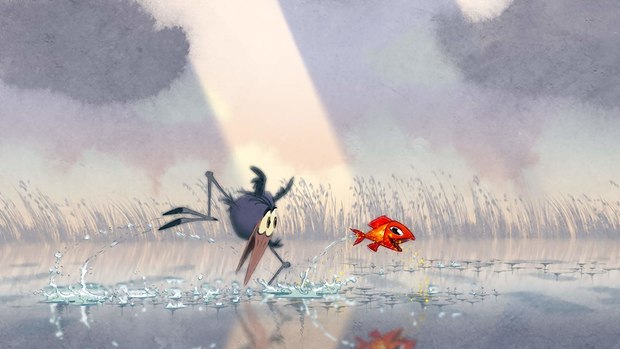 William Salazar’s Bird Karma, the first project to emerge from DreamWorks Animation’s Shorts Program, which was formally announced in late 2017, is just one of the studio’s contenders for a nomination in this year’s short film Oscar race.

The 2D-animated short, directed by Salazar and produced by Jeff Hermann, brings a classic hand-drawn look to CG animation. Told over richly toned watercolor textures, the delightfully lyrical tale features a long-legged bird who becomes enamored of a gloriously colored fish. When he finally captures and eats his elusive quarry, the karmic consequences prove highly unfortunate.

The five-minute Bird Karma had its World Premiere at the 2018 New York Int’l Children’s Film Festival, in February, and went on to open the Annecy Festival in June. Winning the Audience Award at the San Francisco International Film Festival, the short has also been highly lauded at presentations at CalArts, Gnomon, and the recent CTN eXpo.

Here’s an exclusive look at how Salazar’s short film was brought to life in a new video, “Bird Karma: from storyboard to final,” which takes viewers through a sequence starting with storyboards and rough animatics on through the ink & paint process, character and water animation, and finally the completed shot. Watch it in the player below, then scroll down for our interview with director William Salazar detailing Bird Karma’s journey from an obscure vinyl record to the screen:

Twenty-three years in the making, the inspiration for Bird Karma first came to Salazar during the mid-90s while living in London, where he stumbled across a vinyl recording of primitive tribal music from India. Improvising on the music, he began a series of drawings of birds employing simple geometrical shapes, eventually completing a 90-second pencil test. Then Salazar joined DreamWorks Animation, flying to Los Angeles with the sketches and pencil test packed up in a cardboard box that sat untouched in his attic for two decades. But when the studio started soliciting projects for its fledgling shorts program, Salazar decided it was time to get serious about his idea. He expanded the pencil test into a three-minute animatic, completed in his spare time over a three-month span, and pitched it to the program.

“It was very fast, very rough and I did it myself on my personal computer,” Salazar recounts. “When I pitched it, I talked about the theme, which was, ‘Be happy with what you have,’ or ‘Be careful what you wish for,’ along with the idea that the bird is a primitive being, so it’s reacting on instinct, while the fish symbolizes a more, you could say, higher consciousness.” Enlightenment in Bird Karma, according the Salazar, comes from the fish. “Even in their movements, there is a contrast between the two. The bird’s movement is very staccato and very straight, and the fish is all about circles and weight, so they’re very different in the way they move,” he illustrates. “I had a lot of fun doing this,” he continues. “You think that the bird gets enlightened by this fish, but in the end his instincts take over and he eats the fish. There’s a bit of the story of The Scorpion and The Frog.”

Employing what Salazar calls a “clean-rough” visual style, Bird Karma harkens back to classic hand-drawn animation but with a looser, sketchier texture that produces the emotional impact of some of the finest concept art. “I’ve always loved those 2D rough tests, to the point where it’s always a little disappointing to see the final cleanup, because it always seems as if something has been lost. So, for Bird Karma, I was hoping we could keep a rougher line. It isn’t rough or clean, it’s somewhere in-between,” Salazar says.

DreamWorks hasn’t staffed a cleanup department since its 2D days, which meant that Salazar and his team -- most of whom had worked together since Prince of Egypt, including Jakob Jensen, Kristof Serrand, Simon Otto and Steve Wood -- had to clean up all the animation on their own.

“That’s why we have this clean-rough style where the line is vibrating a little. It’s still a bit shaky, which is something that I always wanted to see because we could never do this in a feature film, we always have a clean line,” Salazar explains, noting that the rough lines also fit well with the environment, giving all the elements an appearance of suspension. “It looks like it’s watercolor, and the drawings really look like they’re handmade. I think if the drawings were cleaned up, they would lose some of the charm and it wouldn’t look appealing. It would look too plasticky or too simple,” he says.

-- Only on ANIMATIONWorld:
New DreamWorks Shorts Program Is for the Birds (and Marsupials) --

“We also saved time this way, because cleaning up a short is very time consuming, so I was happy about that,” he goes on. “We saved time, and also I think it looks better, but on the other side, we lost a lot of time painting it because all the lines were open. Whenever people tried to paint with the paint bucket tool the color would just spread out everywhere, so they had to almost hand-paint it frame-by-frame.”

Rough edges and all, Bird Karma employs a tremendous amount of artistry. One major inspiration for the visual style was the renowned British watercolorist J. M. W. Turner (1775-1851), who used a typical “glazing” technique with the application of many layers of semi-transparent paint on paper to give depth and transparency to the landscape and increase the level of atmosphere. And while the film’s setting is quite minimalist -- really just a line with water and sky -- ongoing gradual weather changes capture the viewer’s interest, providing a vibrant feast for the eyes. Production designer Raymond Zibach (Boss Baby, Kung Fu Panda franchise) single-handedly painted all the backgrounds and executed the color keys for the characters, applying a paper texture under the image, and then using different types of wet and dry watercolor brushes to achieve a watercolor effect. “If you look closely at the moment in the movie when it begins to rain, you can even see the canvas getting wet and the color start to drop down the frame in the background,” Salazar remarks.

“Raymond talked to me about doing it in watercolor and I loved the idea, because the all of the film is in the water,” Salazar continues. “He told me, ‘Well, let’s do something that looks watercolor. Even for the characters,’ and that was perfect for the movie.”

Each element of Bird Karma is made to look like it’s hand-painted or hand-drawn. “Every time there was something that looked too computer-made, we tried very deliberately to get away from it,” Salazar recalls. “So there aren’t really any fancy camera moves. It’s very steady, very still.”

The reception for Bird Karma has been very gratifying for Salazar, who attended the film’s opening night screening at this year’s Annecy Festival and recently participated in a special making-of presentation at the Creative Talent Network eXpo in late November.

“It is always wonderful to do a presentation with students. They are the most lively audience and they’re enthusiastic -- they scream, they laugh, they’re very, very vocal and you can see the sparkle in their eyes,” he effuses. “It’s difficult when you’ve been working for 10, 15, 20 years in the business, it’s not the same. People came to see me after the presentations, and they were saying, ‘Oh, I hope DreamWorks does more 2D animation. Oh, I love 2D animation.’ A lot of people really are into 2D even though most of them don’t do 2D and they’re not planning to do 2D in the future, but they just love the medium and they’re hoping that we do more of it at DreamWorks. I tell them that there won’t be any feature films in 2D anytime soon, but maybe short films, that might happen again.”