For series creators Matthew Bass and Theodore Bressman, druggie penguins, workshop politics, and a ‘dick pic’ scandal are mere foreplay in the twisted power struggle over the Red Suit; their new animated comedy about an extremely flawed Santa premieres tonight on SYFY. 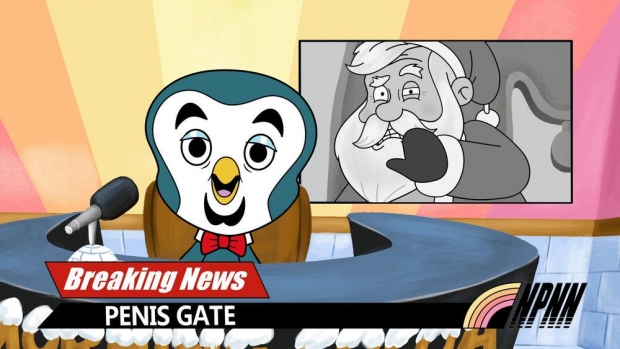 Premiering tonight on SYFY alongside Charlie Hankin and Stoopid Buddy Stoodios’ The Summoner is The Pole, a new 2D animated comedy that begs the question, “What really goes on in Santa’s workshop?” Created by Matthew Bass and Theodore Bressman, the series is produced by Yeti Farm Creative and executive produced by Mark Gordon.

In the show, a scandal involving “Saint” Nick (Bobby Moynihan of SNL fame) rocks the “holly jolly” foundations of the North Pole; all hell breaks loose as the future of Christmas turns into a twisted power struggle for the Red Suit.

As Nick, the 20th to wear the Suit, struggles with the age-old question of naughty vs. nice, his wife Mrs. Claus, aka Gretchen (Jillian Bell – Workaholics, SuperMansion), works to keep the political machine (toy production) afloat. It isn’t easy as they juggle the factory elves, including Nick’s head elf Matilda (Nicole Byer – Tuca & Bertie, *Loosely Exactly Nicole) and political activist Helenor (Sasheer Zamata of SNL fame), as well as parenting two sons – Nick’s mini-me Harry (Sungwon Cho - Aggretsuko) and the crown prince, Jack (Timothy Simons of VEEP fame), who’s not only next in line for the Suit, but also looking to rebrand it. Reporting on all the drama at the Pole? Cocoa (Colin Jost, also of SNL fame), host of “Morning Cocoa,” the North Pole news program.

The idea for the series, according to Bass, was quite simple. “We were sitting around with Mark Gordon one afternoon and he was talking about how he’d love to see a dysfunctional family show set on the North Pole and we just ran with it. Step 1 was making it animated, cuz it would allow us to have more comedic tools at our disposal, like magical elves, reindeer, and drug abusing penguins. And Step 2 was really answering the question of ‘why tell this story?’ And that got us into the allegory for a divided America.”

“We also talked a lot about what a fresh entry point into a story about Santa Claus could be, and we started thinking, ‘What about doing a show about the North Pole on every day… except Christmas?’ Bressman adds. “So, Christmas is basically just the entry point into this world, and then it quickly devolves into this story of chaos, backstabbing, and political intrigue. Ho ho ho!”

While the idea of a “naughty Saint Nick” is far from new, Mr. Claus doing lines, as a fresh take, isn’t for everyone. Or every network. For the creators, this meant animation was the only viable medium for their show, because, in live-action, there’s no feasible way for “Mrs. Claus to have an affair with a reindeer!” Certainly, without a hefty assist from ILM. “I wonder if it’s harder to subvert Santa Claus in live action,” Bass notes. “While pitching the show, many networks were nervous about a hard R / flawed Santa, but perhaps the silliness of animation made for a lighter character? It’s definitely crazy how people hold onto the sanctity of a fictional character.”

“For us there was always a larger ambition and scope for the show,” he adds. “Short form animation lends itself much better to episodic storytelling, but our goal was to take the high drama of Succession and condense it into 12-minute episodes.” Pre-production for the pilot began last April; development began on the series two months later. From greenlight to wrap, the first season of six 15-minute episodes took nine months to produce. “It was a fairly big production team,” Bass shares, “though unfortunately, we were never able to meet all of our animators or team for that matter, on account of them being in Canada and the pandemic restricting travel. But day in day out, we had a solid foundation from both Yeti and SYFY, who were instrumental in bringing this show to life.”

Visually, Bass and Bressman began designing the show by looking at the colors, sets, and characters of their favorite Christmas cartoons - The Grinch, Charlie Brown, and Hanna-Barbera, among others.

“Our goal for the show was to take the familiar and subvert it,” Bressman explains. “For us, this began with the world building. We wanted to present a glossy, poppy, happy veneer to juxtapose with all the tension and double crossing going on juuust below the surface. And similarly, we wanted to play with the nostalgia of the Christmas specials of our past to build a familiar facade that we could merrily, and I guess ruthlessly, tear down! I think this is something our animation partners at Yeti Farm both immediately understood and took great delight in. Probably a little too much.”

As with many 2020 productions, the show’s biggest challenges were pandemic related. “Doing remote voice recordings had numerous tech challenges,” Bass says. “We also had to hold remote edit and sound mixing sessions. The communication and efficiency of those steps would have been greatly improved had we all been in the same room. That being said, our team was incredibly professional and after some trial and error, we landed on a process that really helped finalize the show.”

“Doing animation for the first time, remotely, was challenging for sure,” Bressman adds. “I mean, we did everything over Zoom, even the records, and it will be sort of insane when we meet everyone in person for the first time, like our actors and our yeti friends at Yeti Farm. And I’m also pretty awkward to begin with.” The creators gush about their cast, who Bass proclaims brought to the show “a free spirit and a level of comedy that superseded our writing!” “We were really lucky to get our cast,” Bressman concurs. “They’re all far far funnier than we could ever be, so we made sure to give them room in our sessions to improv as much as they wanted.”

Some of that improv from the pilot recording sessions helped Bass and Bressman reshape the characters and their story arcs for the coming season. “Hearing Jillian nail Ebba even in that opening news segment certainly informed the journey that character takes over the course of the season,” Bressman reveals. “Tim Simons happened to fall in love with Mac, The Trampoline elf, immediately, which led us to having far more trampoline jokes than maybe a show should ever have. But we stand by them. Then, there’s such a sweetness and jolliness about Bobby that we always felt encapsulated the true essence of Nick, despite his shortcomings or mistakes. The experience of hearing Sasheer do Helenor for the first time is something I will always remember. Nicole took Matilda, the head elf, and immediately gave her a playfulness and sense of adventure that hopefully reminds the audience that even though work needs to be done, it’s the work of making toys. Sungwon is like a literal virtuoso. And with Colin, we’d been writing another movie with him around the time we were casting Cocoa and the second we showed him the design he was in. So special shout out to our art director Greg Huculak for that one.”

Noting how much he and Bressman enjoyed producing the show’s inaugural season, Bass says, “Each stage of the production had its own moments of joy and fun. But, I have to say that in the beginning, each weekly production meeting began with a ‘show & tell’ from our art director, and getting to see the characters take shape, and color and the sets being designed, was not only awesome, but extremely motivating as we were trudging through the writing of the final scripts.”

“This show really was our way of getting through the pandemic,” Bressman adds. “I mean we literally started writing the season like a year ago almost to the day, so I guess I’m grateful for all of it. And hope that it gives people good tidings and cheer!”

The Pole and The Summoner premiere back-to-back today, March 17 starting at 11:15pm on SYFY. ‘My Dad the Bounty Hunter’: Representation Beneath the Skin
The Massive Creative Fellowship Behind ‘The Lord of the Rings: The Rings of Power’
‘The Dragon Prince’ Director Villads Spangsberg Talks Toonlines and Tough Challenges
Laurence Fishburne and Steve Loter Talk ‘Marvel’s Moon Girl and Devil Dinosaur’
Taking an Old-School VFX Approach in ‘All Quiet on the Western Front’
‘Natural Habitat Shorts’: Like ‘Ranger Rick,’ But for Adults
Framestore Sets Sail on ‘1899’ with New Virtual Production Tools
VFX is the ‘Thing’ for Tom Turnbull on Tim Burton’s ‘Wednesday’
END_OF_DOCUMENT_TOKEN_TO_BE_REPLACED