Every Wallaby Has His Day: Rocko Returns in ‘Rocko’s Modern Life: Static Cling’ 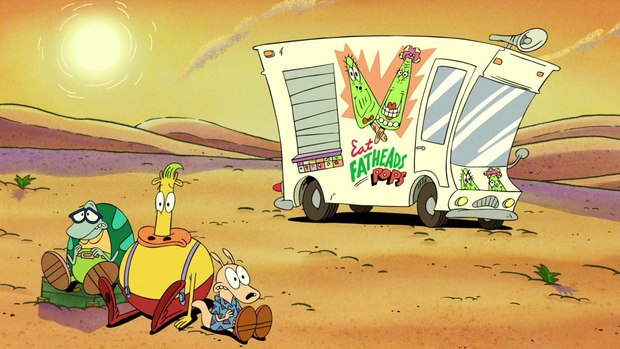 With today’s Netflix release of Nickelodeon’s Rocko’s Modern Life: Static Cling, creator Joe Murray once again visits the zany lives of his timid wallaby, Rocko, and best friends Heffer Wolfe and Filburt, in a raucous 45-minute animated special sure to delight fans of classic, gag-driven animation. After being in space for 20 years, Rocko and his friends attempt to conform to an even more modern life in O-Town, where coffee shops are on every corner, food trucks offer multi-layered tacos, touch-screen O-Phones are being upgraded on a near-constant basis, an instant-print kiosk has replaced Rocko's old job at Kind-of-a-Lot-O-Comics, and radioactive energy drinks turn their consumers into mutants.

Greenlight by then Nick development head Linda Simensky and launched as the fourth new Nicktoon series back in 1993, the 52-episode Rocko’s Modern Life became a fan favorite though often controversial show, known for its wink-wink sexual inuendo and sometimes crass character behavior. The series boasted a crew of creative talent that included many well-known names in TV animation, including Murray, who went on to create Camp Lazlo! and Let’s Go Luna, creative director Stephen Hillenburg, who left to create SpongeBob SquarePants, Jeff Marsh, a storyboard artist who went on to create Phineas and Ferb, and voice actors Tom Kenny, Charlie Adler and Carlos Alazraqui.

Influenced by everything from old Looney Tunes cartoons to underground comics, Murray, who worked as a political cartoonist early in his career, made several short animated films in the 1980s, as well as two MTV IDs, before creating My Dog Zero, a 1992 short that generated network interest, which along with one of his unpublished comics, eventually led to Rocko’s development.

According to Murrary, “Rocko was a character I had played with in comic strip form. When I developed a show about modern life, I wanted an everyman who deals with life in a very satirical and caricatured way… the eye of the hurricane where everything is going on around him. I built Rocko’s character that way. Where garbage day or laundry day can be a very dangerous day.”

When first approached by Nickelodeon to revisit his beloved cartoon wallaby, Murray hesitated. “When Nickelodeon contacted me to float the idea of bringing Rocko back for a special. I wasn’t too hot on the idea,” he shares. “I felt we could really mess it up. But the fact that the last episode we did in the 90s had Rocko, Heffer and Filburt blasting off into space, I thought it would be perfect that they come back to O-Town after being gone for 20 years. The special really took off after that, with ‘changes’ from the 20-year span becoming the main topic of the story. The whole idea of Rocko trying to bring his favorite cartoon back after being off the air for 20 years seemed like a great mirror and a lot of fun to do.”

With 20 years of recent history to riff on, Murray hand ample and fertile comedic and cultural ground to work with for the special “There was definitely a lot of material to work with, as far as a satirical take on the present day,” he explains. “There were a lot of directions we could go in, but I felt we hit the important ones. We had a whole scene with Chokey Chicken poking fun at the ‘Tender Greens’ organic, happy chicken food phase we’re going through right now, where eating well can sound so trendy. But we had to drop it for time. Even so, I think we hit a lot of great stuff.” As far as the production itself, Murray notes that his production team took extra care to follow the style and tone of the original series, down to how they colored the backgrounds. “We had a pretty good-sized team, with a couple of people who worked on the original Rocko and a lot of crew who grew up on Rocko,” he shares. “We worked really hard to replicate the way the show was done in the 90s, from hand painting the backgrounds with Dr. Martin dyes [Dr. Ph. Martin’s dyes] to doing hand-drawn pencil animation. From a design standpoint, we did our best to replicate everything we did previously. We pulled old backgrounds from archives and worked with the designers to impart that same feel on everything. Cosmo Segurson, my co-director, was as meticulous as I was, if not more so, being careful to match everything the way we did it. We didn’t reboot anything, except to turn Really Really Big Man into a modern Marvel Movie character for a spoof on superhero movies.”

“The Korean studio we worked with had one of the original directors who worked on the original Rocko, so he became our director,” he continues. “They had to pull out an old Xerox machine to get the pencil line quality to match what we did in the 90s. We even did some picture correction on the HD to make it look more like 35mm film that we used on the series. From what I hear, these were noticeable details.” That attention to detail, to capture the show’s original look and feel, proved Murray’s biggest challenge. “The biggest production challenge was not letting too much new technology mess with the old Rocko feel,” he admits. “Creatively, it was a challenge making sure we stayed true to the natural progression of these characters; to stay true to who they were but reacting to a whole new environment. We sort of put them in this new world and watched how they moved and talked and reacted. It was fun.”

Ultimately, Murray was glad Nickelodeon convinced him the world needed a new jolt of Rocko’s Modern Life. “The fact that there are new fans for something I created over 20 years ago is especially gratifying,” he says. “Some properties don’t age well, or quickly seem dated. I’ve been told Rocko holds up. That makes me feel good, because our team in the 90s was committed to going the extra mile on this series, and I’m glad that it’s not going unnoticed. I hope the special is well received and people feel we did the series justice. I’m keeping my fingers crossed.”

Choc Chip Animation Riffs on Pop Culture in ‘The Art of Murder’
F is for Flake: The (Not So) Great Animation Robbery?
Re-VIEW: ‘Avatar: The Way of Water’ – A Miraculous Vision
‘Kung Fu Panda: The Dragon Knight’ Celebrates a Special Lunar New Year
END_OF_DOCUMENT_TOKEN_TO_BE_REPLACED