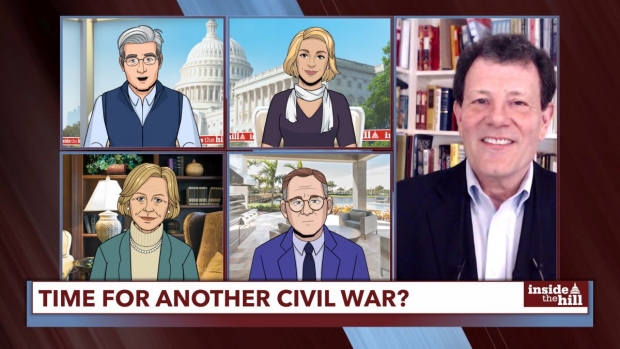 With the March 16 launch of CBS All Access’ Tooning Out the News, audiences have been treated to a daily dose of biting animated satire, deftly written, edited, animated, and assembled within a 24 hour period by a universally sleep-deprived animation production team led by executive producers R.J. Fried and Tim Luecke, both of Showtime’s Our Cartoon President fame.

Tooning Out the News features a cast of animated characters, led by anchor James Smartwood, who mock the news of the day, interviewing real-world guests, newsmakers, and analysts in daily five-to-seven-minute segments streaming evenings Tuesday-Friday, followed by a full weekly episode.

After production shut down in response to the COVID-19 pandemic, Fried and Luecke quickly pivoted, migrating their team within a few weeks to a safe, secure, remotely accessible pipeline and workflow. Production soon resumed; new episodes began airing this past April 7.

For Luecke, Tooning Out the News provides more than biting and often patently ridiculous humor aimed at politics and the media business. “In addition to providing sharp satire on the state of affairs in general and the news media in particular, I like to think we’re offering people a bit of an antidote to the exhausting deluge of news that they consume on a given day,” he shares. “Especially in times as anxious as these, it feels like it’s a privilege to offer a take on the news that strikes an entertaining balance between satire and absurdity.”

Fried agrees, though he notes that while the comedy skewers some of the most important and controversial figures headlining today’s political news, the show always seeks a balance between funny and glib; striking that balance is one of the main challenges he and the other producers face. “I’d also add [it’s a big challenge] making sure the satire is as sharp as possible,” he says. “Animation is an awesome comedy tool, but it can also put you at risk of appearing flippant. So, so we devote a lot of creative energy to making sure the comedy is as sharp as possible.”

Numbering around 25, Luecke’s animation team is responsible for everything from background design, character design, drawn animation, and digital animation, to compositing and rigging. Additionally, he notes, a team of producers keep everything on track, and “a cohort of technical wizards make this impossible work-from-home setup function…a team of editors brings it all together, a (virtual) room full of writers keeps it all funny…the list goes on and on.” All told, the show’s team numbers around 100. Luecke and his team have been pushing the limits of topical animation ever since the 2016 election cycle, when they began using Adobe Character Animator to conduct live interviews with cartoon candidates. That ambitious and successful experiment evolved into Our Cartoon President, where they expanded and refined their animation pipeline to produce a scripted animated series at double-speed, with up-to-the-week commentary on the current administration. Tooning Out the News was the next logical, and according to Luecke, “terrifying” evolution of that pipeline: an animated show that addressed the news of the past 24 hours.

“The interstitial segments were originally conceived following a request from Late Show showrunner Chris Licht to develop refillable, animated content that could live within the Late Show brand,” Luecke explains. “Consulting Producer Matt Lappin and I were watching then-recent news footage of Trump caressing the American flag at one of his rallies, and realized how much fun it would be to bring the flag to life with animation and have it struggle against the president’s grip. From there, we developed a whole pitch reel of news clips augmented with anarchic animation, and those were later folded into the pitch that would become Tooning Out the News.”

“While Zach Smilovitz, Mike Leech, and I were working on Our Cartoon President, we noticed that Character Animator was particularly effective at quickly manipulating front-facing characters,” Fried adds. “That's also very much the aesthetic of cable news. We expressed this crazy vision -- a same-day animated news show -- to Animation Director Steve Conner, Supervising Editor Thom Berkley, Technical Director Brian Maffitt, and Tim, and they built this beautiful, living, virtual animated Big News studio. We married the animated news show with Tim and Matt's interstitial concept and, luckily, CBS All Access bit on the idea.” Pre-production on the show began while the most recent season of Our Cartoon President was still in production at the studio. So, an entirely new animation team and production pipeline was assembled from scratch, along with a full library of assets, in about five months. The wild-card nature of the show – where each day’s content is dictated by the news cycle – meant artists were recruited who could wear multiple hats on any given day: from character design, to storyboard, to 2D digital puppet animation. According to Luecke, the first big production hurdle was building a library of characters, sets, and show packages for each of the news shows being featured on the “network.” “We ended up casting each anchor with real-life models and taking extensive photo references to draw from, so that the cast would feel as true-to-life as possible,” he says. “For the show packages, we hired designers who had experience working in the news space, to make sure that the graphics also maintained a realistic sense of gravity and polish. All the while, we were engineering the animation pipeline that would make all this work. A very talented team of animators and riggers set up puppets in Adobe Character Animator that could capture performers in real-time, and our incredible technical team built a NASA-like control room in David Letterman’s old personal screening room at the Ed Sullivan Theater, where recording could take place as if it was a real news show. It was a marvel of engineering, that sadly, is not getting much use now that the whole show is being produced from home.”

“Finally,” he continues, “the editing team developed an intricate, nimble pipeline in Adobe Premiere, which allows them to cut the show together almost as if it were a real news show, and swap in new animation passes on the fly.” Now that the show is being produced remotely, and performers can no longer be captured in real-time during the record, the animation process begins with a voice over radio play that comes out of editing. To make the process as simultaneous as possible, Luecke’s team “breaks up the VO into as many pieces as possible, with numerous artists cleaning up lip sync in Character Animator while other animators create motion-capture performances in Character Animator to the VO.” Through a complex and laborious coordination effort, encompassing Slack, Box, and Zoom, the components are all compiled into single projects and sent back to edit.

For the interstitials, the process uses a typical animation pipeline, though with an extremely compacted timeline. “We have a team of artists who develop character designs and animatics late into the night, then a team of animators who polish those designs and create drawn assets in the morning, followed by a team of After Effects artists who rig and puppet those assets throughout the day – all while a team of compositors is prepping footage and adding effects,” Luecke shares.

On the writing side, the night before the show, Fried does his best to plan out the broad brushstrokes of the next segment. The following morning, at 7:45 am, a research packet arrives with news stories; from 7:45-8:15 am, a small group discusses items and angles they want to cover. The writers meet from 8:15-9:15 am; writing, re-writing, reading aloud, rehearsing, and more re-writing happens from 9:15 am until 12:30 pm. They record from 12:30-1 pm; afterwards, they grab pick-ups, work on long-term assignments such as fake commercials, and start planning the next show. Fried laughs, “Of course, at night, once again we're writing the interstitials! It's a long, intense day, but very exciting to see the segment out in the world in the morning.”

The voice over typically comes in around 4:00 pm; animators rush to get it lip synced, motion-captured, and compiled as quickly as possible, usually in a matter of just a few hours. “On days where new actions or elements need to be built into the characters, this can become a bit hairier,” Luecke describes. “Once the animation is back in edit, the writers spend more time finessing the cut, requesting animation revisions, and so forth, before delivering around 10:00 pm.” “For interstitials, we come up with a pitch around 7:00 pm for the next day, and artists immediately begin sketching out character designs and possible beats,” he continues. “A mockup of the segment – essentially, a radio play with VO, sound effects, and rough previs – comes in around 11:00 pm, and our late-night crew works on an animatic until 3am. A team of artists come in at 7 am to pick up where the late night team left off; by noon, we start to have assets being sent to our After Effects artists, who work on puppeting, compositing, and effects until about 7:00 pm, when we deliver the finished interstitial. Then it’s on to the next pitch.”

While political humor has been the fodder of entertainers since the first time someone hurled an onion at the fellow tribe member holding a bigger stick, Tooning Out the News is unique in its ability to skillfully and cleverly merge a satirical take on topical news with an almost real-time animation process, maintaining a production value that certainly holds its own against any other animated series being broadcast or streamed today.  “What I’m most proud of about this show is that it feels like an entirely new format.” Luecke concludes. “In a TV landscape where satirical news programming has become increasingly saturated, this feels like a wholly unique way to play with the news. Between the interstitials and the panel segments, we’re using animation to play with the news on multiple levels – both injecting animation into news footage to create new takes on the moments of the day, and employing animated characters to interact directly with the newsmakers of the day. It’s this blurring of animation and reality, on a daily basis, that I find so exciting; it creates endless opportunities to have fun.”

Fried concurs. “I agree with Tim,” he says. “It's truly unlike anything else on TV. We can't believe we get to make this show. It's so ambitious that most people who watch it don't believe it's ‘real.’ The interviews are real, the Giuliani call was real -- it's all as real as an animated news show can be.”

Animated Characters: The Art of Babbitt – Part 1
Bruce Smith and Ralph Farquhar Talk ‘The Proud Family: Louder and Prouder’ Season 2
VFX is the ‘Thing’ for Tom Turnbull on Tim Burton’s ‘Wednesday’
We Need to Chat
Choc Chip Animation Riffs on Pop Culture in ‘The Art of Murder’
F is for Flake: The (Not So) Great Animation Robbery?
Re-VIEW: ‘Avatar: The Way of Water’ – A Miraculous Vision
‘Kung Fu Panda: The Dragon Knight’ Celebrates a Special Lunar New Year
END_OF_DOCUMENT_TOKEN_TO_BE_REPLACED