EP Brandon Sawyer Talks ‘The Boss Baby: Back in the Crib’

In the latest DreamWorks Animation ‘The Boss Baby’ franchise outing, hitting Netflix May 19, Theodore gets framed for embezzlement and reverts to his Boss Baby self, joining with brother Tim and nieces Tabitha and Tina to save Baby Corp from a new group of arch-nemeses. 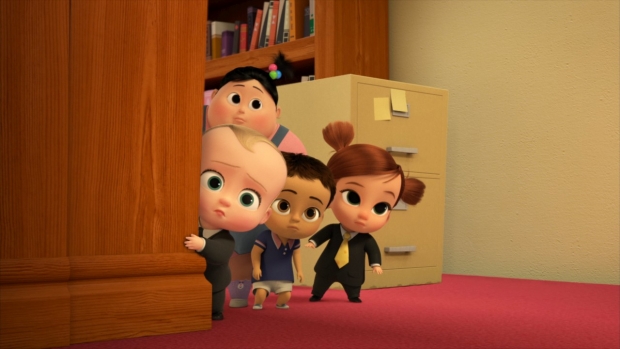 With two features, two shorts, and a four-season series running over the last five years, DreamWorks Animation’s The Boss Baby has become a burgeoning franchise that would even make Ted Templeton proud. And now the baby love is spreading even further with the studio’s new series, The Boss Baby: Back in the Crib, premiering on Netflix Thursday, May 19.

The show takes place following the events of The Boss Baby: Family Business where Ted and Tim - now father to Tina and Tabitha - found themselves turned back to their baby and childhood selves by way of a special bottle serum so they could uncover dark secrets behind Tabitha's school and its mysterious founder, Dr. Armstrong. In Back in the Crib, Ted uses the same serum to go into hiding as a baby after being framed for fraud at his adult company.

Working with his niece, Ted and Tina co-lead a new Field Team fighting to increase Baby Love while keeping a new group of teenage arch-nemeses - The Uncuddleables - from destroying Baby Corp itself.

The series is executive produced by Brandon Sawyer with supervising producer Matt Engstrom, both veterans of The Boss Baby: Back in Business.

AWN talked with Sawyer about what made him decide to kickstart a new series, even after deciding just last year that he was “done with it,” and the special new “villains” that challenged the team to write episodes that weren’t just comedic, but also posed dilemmas to which there were no clear answers. Brandon Sawyer: Honestly, it was seeing a rough cut of what Tom McGrath and Michael McCullers were doing with The Boss Baby movie sequel. If you watched the original show, you know that we ended things. There was a final episode with closure and, hopefully, it was emotional. It was for us. And I honestly thought that I was done with it. I felt very satisfied with the show that we made. Then I was invited by Tom to watch a rough cut of the movie.

Seeing what they were doing with it, where decades have passed and the family dynamics have changed, there are all these new characters, I just loved it and I wanted to do more with these people. That led to us figuring out, ‘Okay, what would a new series look like?’

VD: Back in Business had roughly a four-year run and you do have, like you said, new family dynamics with Tim’s daughters. But where do you draw from to get new baby content for a whole other show, where each episode is a new adventure?

BS: Anytime you introduce new characters, there are new stories to tell. But the thing that I love about working on this show is that, for all the specificity of this concept with the Baby Corp fighting for baby love, at the core, it’s a family sitcom. There are all these family dynamics and, sure, there’s some uniqueness to the dynamic when there's a talking baby involved - or many in the case of the new show - but it never felt like we were going to run out of ideas on the series because there's this deep well of family relationships.

We've gotten to play in both worlds, exploring what’s going on in the corporate baby world and a baby needing mommy to take them to the park and there's conflict with another park mommy. We have high concept stories and really small-scale stories that become big and absurd and fun.

VD: Because we live in a world of memes and Tik Tok videos where we're constantly seeing hilarious baby content, how much of the writing is coming from the outside world, so to speak, and how much of it is referenced from your own families?

BS: There's always a bit of a balance. Only two of us on the writing staff actually have kids of our own. But more of it is drawn from experience in life than from just trolling. Everybody grew up in some form of family, no matter what that dynamic looked like. So, when you're talking about families, everybody's got a story. Everybody's got something interesting to share that's happened in their lives. VD: What are some of these new stories and adventures we’re exploring in Back in the Crib that we didn’t touch on in the previous show or movies?

BS: Well, one is we have these new villains, The Uncuddleables, who are teens with a really legitimate problem with Baby Corp because babies are cute, and babies are loved and, meanwhile, these teenagers are in the most awkward phase of their lives. They’re like, ‘We're kind of past cute, so where does that leave us? What's our slice of the pie here?’ That was a really fun group of characters for us to write because it's always fun when you have a villain where, if you scratch your head a bit, you're like, ‘Wait a minute, they kind of have a point.’

You know, our approach on the show has always been to write things that we enjoy. It was always ‘What do we like that feels universal? What are these emotions or conflicts or desires that anybody can relate to, even when you're talking about a corporate world?’ Yeah, kids don't usually work in a corporation, but they get rivalry and performance being measured. Those real emotions were always our guiding stars. And that didn't change from the first show to this one.

VD: I know all these episodes are probably your babies, pun intended. But were there specific ones you found yourself enjoying more?

BS: There are two that stand out for different reasons. One that I wrote myself was almost a bottle episode, really contained to the living room, where they're just playing three rounds of a Go Fish tournament and, as will happen with family game night, everything in life comes to a head when you're competing with your family members. So that was fun, and also really challenging. All through production I was tracking where every card was and what matches had been made.

And then there's an episode where nearly the entire episode is just Ted and Carol. And it's the least baby-themed episode we've done. It's the two of them on this road trip. And the whole episode is Ted lamenting about how much it sucks being a baby compared to the life he used to have before he had to go into hiding. It was a very different episode for us to tell. VD: In a film, the storyline often leads up to one overarching message surrounding friendship, family, etcetera. But with a TV show centered around comedy, we usually see individual episodes that are more grounded in humor. When you were creating this series, were there messages you wanted to instill into each episode in addition to the sitcom writing? Or is the whole series leading up to one big takeaway?

BS: What we found was most rewarding, and what felt richer to us, was starting more with questions than messages. My feeling is, if you start with a message, it starts to get really didactic and school-like, where it’s clear that we know what message you're trying to sell here and what value you're trying to convey. But when you start with a problem or a question, that's a little sticky or trickier, like those teenagers that I mentioned, as well as ‘How do we reconcile this?’ Because, yeah, we want babies to be loved and adored, and they are cute. But where does that leave these other characters? And how do we deal with them in a way that feels fair and honest to them?

And even the work-life balance between Boss Baby and Tina where he's very business-focused and she's like ‘No, I work to live. I don't live to work,’ and what is the right balance between those two things?’ Starting with questions that don't have a really clear, obvious answer are the things that we like to play with.

VD: Do you find that it’s a fine line you straddle between writing comedy sketches while also instilling these morally trying questions within a series that still feels like a funny, Boss Baby show?

BS: Starting sometime in the middle of our previous show, we began feeling like, ‘If we don't make people cry at least once, we're not doing our job.’ We're confident we can make them laugh. The concept is funny, our actors are so good. Our animation is so good. Our storyboard artists are incredibly talented and funny. So, we know we can do that. But can we challenge ourselves and make people cry too? And can we make them feel for these characters? That’s the balance we’re always looking for. VD: Branching off a franchise that's been around for half a decade, what do you hope people - who are either long-time fans or who are coming into this world for the first time - enjoy about this new series?

BS: For people returning, we threw in a lot of continuity from the first film’s characters that you don't need to have seen the original show to appreciate. But if you did see the original show, there are constant little references to things that might have just been a throwaway gag.

For people coming into it for the first time, and for me, the hook is this family. And that includes both the Templeton core family, but also this family of characters on the field team and at Baby Corp. This ensemble is so good. They're written well. And every voice actor that we brought in, most of whom I've never worked with before, are so funny and so talented, you can go from episode to episode and a different character will emerge as a favorite character.

‘Baymax!’ Provides an Rx for Humor and Compassion
How Digital Domain Brought Photoreal Characters to Life in ‘The Quarry’
SCAD GamingFest: Building Shared Story Experiences with Diverse Character Design
Mission Critical: ‘Lightyear’s Journey to Infinity and Beyond
Putting the Fun in Dysfunction: The Non-Humanistic Therapy of ‘HouseBroken’
‘The Freak Brothers’: This is Your Humor on Drugs
The Heroic Logistics of ‘Superman & Lois’ VFX
END_OF_DOCUMENT_TOKEN_TO_BE_REPLACED