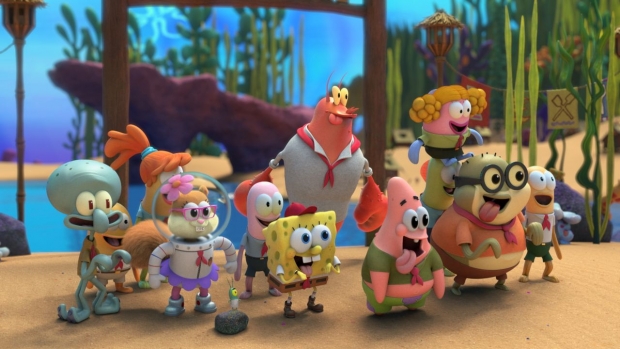 The original 13-episode 3D/CG-animated prequel series follows 10-year-old SpongeBob SquarePants and his pals during an endless summer of fun, where they spend their time building underwater campfires, catching wild jellyfish, and swimming in Lake Yuckymuck at the craziest sleepaway camp in the kelp forest, Kamp Koral. It’s got all the funny gags and goofy mayhem you’d expect. And then some. The first six episodes hit the streamer today; the rest of Season 1 will roll out on the platform at later dates yet to be announced. SpongeBob SquarePants was created by Stephen Hillenburg, who sadly passed away from ALS in 2018. And what a storied franchise he birthed. According to the network, since launching on July 17, 1999, SpongeBob SquarePants has been the number-one animated series on TV for the last 18 years; it has spawned several theatrical releases, including The SpongeBob Movie: Sponge on the Run, which also premieres today on Paramount+, a Tony Award-winning Broadway musical, a behemoth merchandising empire and a huge global fan base. The series is the most widely distributed property in ViacomCBS Networks International history, seen in more than 170 countries and territories, translated into 30+ languages, while averaging more than 100 million total viewers every month.

As co-executive producer (co-showrunner), Ceccarelli helped develop the Kamp Koral: SpongeBob’s Under Years world, the new characters, and locations. He oversaw and contributed to the writing, boarding, and direction of each episode as well as all the post-production creative decisions. Referring to his work with Ceccarelli, Waller notes, “We have been in charge of creating all things SpongeBob since season 10. [On the new show] Our main duty was to explore a portion of SpongeBob’s life, years before he was everyone’s favorite fry cook, while being true to the level and style of comedy the fans have grown to expect. As always, we want parents to be able to watch with their kids and laugh as hard as their kids do. Kamp Koral is definitely not a ‘just for the kiddies’ show.” Waller goes on to say, “The idea for the series was sparked by a flashback scene in the most recent movie. Having worked on the original show for years, we had strong opinions about how the new show should be approached. With our writers, we calculated the hierarchy of the camp and what age our characters needed to be for it to make sense in our existing timeline. We divided the characters by age and felt that Mr. Krabs and Mrs. Puff should be in charge with Plankton working as the fry cook trying to earn money to pay for college - no one at Kamp knows he also has a secret laboratory located below the canteen.”

“Squidward, Larry the Lobster, and Bubble Bass have always seemed to be a little older than SpongeBob, Patrick, and Sandy, so making them counselors felt like a perfect fit,” he continues. “Deciding which campers would go in which cabin was fairly simple. To mirror the relationships established in the original show, we knew SpongeBob, Patrick, and Squidward would need to share a cabin. Bubble Bass would obviously be in charge of the nerd cabin, Larry in charge of the jocks, and, of course, the Anchovies have a cabin of their own. You know, because ‘the smell, the smelly smell that smells.’”

The showrunners were determined to make Kamp Koral work for the same all-ages audience that the original show is made for. This meant aging the characters up from the movie versions and using the original voice cast, who can more easily deliver the kind of comedy everyone is familiar with. “We also tried to copy as much of the 2D show’s visual language as we could,” Ceccarelli says. “This was quite difficult since TV animation production [using 3D/CG] isn’t used to the kinds of extreme expressions and slapstick surreal humor we love to do on SpongeBob SquarePants. Luckily, we have a great team of CG veterans who were all itching to try something fun and new.” Finding enough artists to produce 13-episodes of 3D/CG on a tight schedule wasn’t easy. “The main challenge was finding a crew capable of building a new world, from the sand up to the beautiful ocean/sky above our Kampers, at breakneck speed to have our show premiere in March,” Waller reveals. “And boy, did we luck out! At every level, they have jumped at the chance to make Kamp Koral true to the original show, and then expand on that in ways only CG can. Having seen other CG TV shows, we were very worried we wouldn’t be able to hit the same high mark when it comes to the characters’ acting and posing. But those challenges excited the crew, and they came up with innovations to hit the wild and varied expressions our storyboard artists were throwing at them.”

While focusing their attention on designing and producing a show that successfully captured the look and feel of the long-running 2D series in 3D/CG animation, the showrunners also had to ensure they embraced and captured the essence and tone of the beloved characters, their relationships, and the humor in their actions. To Ceccarelli, that meant following a simple formula. “We’ve never really been that concerned with continuity on our shows,” he says. “We tend to like the cartoons in the classic series to be unencumbered by chronological episodic storylines. So, to us, this is just another funny cartoony cartoon about our silly characters and the goofy situations they get into. We mostly tried to keep the characters’ personalities as close to the originals as possible. In some ways their funny quirks are even more pronounced in their younger, purer forms.”

“SpongeBob is still SpongeBob, but if you can believe it, a little more naïve and less worldly than his older lovable self,” Waller adds. “Patrick is also less worldly, and he has no awareness of other people’s boundaries. Squidward has yet to blossom into his full curmudgeon, but sharing a cabin with SpongeBob and Patrick will bring his inner curmudgeon to the surface. Unlike the other kids at Kamp, Sandy Cheeks is not there just for the summer fun. She’s on a very special mission that you’ll need to watch the show to learn! We had free reign developing the lush world of Kamp Koral, Lake Yuckymuck, and the wild wooly creatures who reside within, as well as the mysterious and mischievous folk that live just beyond the Kamp perimeter.” “SpongeBob isn’t the expert jellyfisher that we know from the classic series,” Ceccarelli shares about the show’s inaugural season. “Patrick is even more reckless about the things he’ll attempt to eat. He might eat a truck or possibly be eaten by one. Sandy will meet some folks who are even more countrified than she is. An Anchovy might say moop’ instead of ‘meep.’ There’s going to a forest full of giant kelp and wild animals and maybe a nudist camp…? All kinds of crazy stuff!”