The director’s vibrant, compelling short, ‘The Very Pulse of the Machine,’ channels Mobius’ psychedelia within an ambitious, toon shaded 3D/2D hybrid animation style to tell the story of an astronaut reeling from a deadly accident, trying to get back to her ship while using mind-warping drugs to counter her injuries. 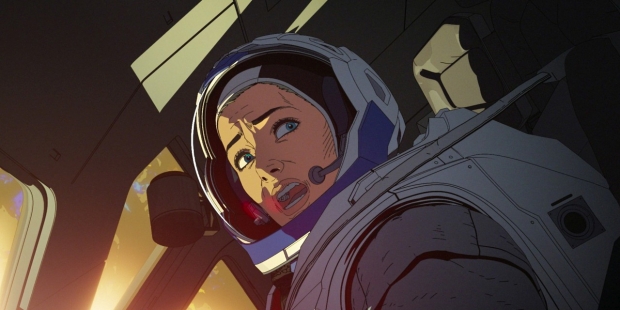 Love, Death + Robots’ anthology of 2D, 3D, hand-drawn, computer-generated, gruesome, gorgeous, funny, frightening, and every other kind of story style has always celebrated the good, the bad, and the downright weird since its first set of shorts premiered on Netflix in 2019. The series, at its core, boldly declares to the industry that any story can effectively be told in any style, as long as there’s passion behind the effort.

For artist and filmmaker Emily Dean, that bold, free-spirited sensibility was music to her ears… and a wonderful opportunity for her own unique voice.

“I had always wanted to make something that bordered on the fantastic and spiritual,” says Dean, known for her story artist work on films like The LEGO Batman Movie and Scoob! as well as directorial work on shorts like Forget Me Not and Andromeda. “I think that's just a part of my creative voice. And I felt those themes in The Very Pulse of the Machine, the short story.”

Volume 3 of Love, Death + Robots’, which debuted on the streamer Friday, May 20, features Dean’s adaptation of American writer Michael Swanwick’s award-winning short story, published in 1998. The Very Pulse of the Machine follows astronaut Martha Kivelsen who, after surviving a deadly rover crash while exploring Jupiter’s moon “Io,” puts her partner Burton’s body on a makeshift sled - made from parts of the destroyed vehicle – before trying to get back to the lander before her air supply runs out.

Because sleep means a certain death sentence, Kivelsen decides to pump her body with drugs to keep away exhaustion and pain. But the drugs also cause her to hallucinate. In Dean’s animation – a hybrid of 3D and 2D with visual effects layered on top – Kivelsen’s character sees large rocks turn into moving human sculptures, dessert wastelands become underwater oases, fields of crystals becoming rivers of glowing light. All the while, the lonesome astronaut, tired and disoriented, is guided by the poetic readings of a voice that sounds like Burton but claims to be Io itself. “I was invited in to read the short stories that were going to be part of Volume 2, back in May of 2019, and I landed on The Very Pulse of the Machine,” remembers Burton. “When I read the story by Michael Swanwick, I fell in love with it.”

She continues, “Certainly, many space movies follow a person against the elements of a completely unknown, strange world and finding oneself more in communion with the world. Or, in conversation with the world, literally, in the case of my film. But, as a woman, I wanted to make something with a strong female character, and a female character that we don't see very often represented in animation, which is this intelligent astronaut on the edge of life and death circumstances. It’s what I felt that I would really love to do creatively, and also what I felt the show [Love, Death + Robots] needed.”

But when it came to the animation, Dean says the short film – written by Philip Gelatt and produced by Blur Studio and Polygon Pictures – provided not only a chance to dive into the deeply abstract psychological aspects of Swanwick’s writing, but also explore the animation industry’s current capabilities and push creative limits with technology.

“Cel shading has obviously been around for a while, but to get it to the level of detail and finesse I was hoping for made the film, for me, like stepping into a new world,” says Dean. “I wanted to see if we were at that point, technologically, in the industry and what new things we could try. Experimenting in that way was very freeing.” Cel shading, or “toon shading” is a type of non-photorealistic rendering designed to make 3D animation appear to be flat, like 2D, by using less shading color instead of a shade gradient. Mixing this technique with actual 2D backgrounds and visual effects gave The Very Pulse of the Machine’s visuals a fluid and natural feel while also looking vibrant and impossibly fantastical. It’s both magical and disorienting – not unlike a hallucination brought on by pain killers.

“And also, with the performance element of these characters, we had to find an animation style that would allow us to have our characters move the way we wanted,” explains Dean. “We came to the conclusion pretty quickly that Squash and Stretch probably wasn't a good idea and that we needed a little bit more naturalistic motion. So, it was all keyframe animated.”

The illustrations themselves in Dean’s short also pay tribute to the psychedelic paintings of French artist Jean Giraud, who garnered worldwide acclaim predominantly under the pseudonym Moebius. The famous painter also contributed storyboards and concept designs to numerous science fiction and fantasy films, such as Alien, Tron, The Fifth Element and The Abyss.

“The style of Moebius’s work really complements the use and effect of psychedelics and drugs in this story,” says Dean. “I felt like it fit just perfectly.”

But even perfect fits can be a challenge to bring to fruition, and Dean says her production team definitely felt the effects of their own ambitious exploration into the expanse of animation’s potentiality.

“The biggest challenge in production was really teaching an entire studio a whole new art style that they've never done before,” notes Dean. “So, it was a lot of going through and analyzing and going back to the artistic fundamentals of why a line is drawn at a certain point on the face and what muscle that is meant to pixilate, the line density and how many lines we can get away with in the background without distracting the viewer, how to draw the viewers eye with so much real material going on. Everything was meticulously thought out.”

Dean adds, “Something I always remember from my first meeting, when I pitched my idea for the short and the way I wanted it to look, was the reaction from the team. It was like, ‘We don't know how the fuck we're going to make this. But we are so excited because that is exactly what this show is for.’ To me, that's like, ‘Wow. I've stepped into a whole new territory.’”

Dean says Love, Death + Robots provided her the chance to make something completely out of her own intent, without worry as to how it would be perceived by an audience. It was a chance she welcomed with great enthusiasm after having spent so much time in family entertainment.

“It was a great experimental process where I would listen to music, think of a sequence, draw it out, and it'd be completely abstract and weird, and would find its way into the film,” she shares. “I've been working in features for a while and you get into a groove, especially with family entertainment, where you’re like, ‘Okay, what does the audience want?’ But this was just totally about what I wanted to see, and it was really liberating. That's not to say that family entertainment isn’t as good or unique or an equally creative experience. But I'm so grateful for this opportunity because moments like this in the industry are very rare.” And this rare, freeing pass to experiment with story, visuals and everything in between allowed Dean to create a story that lures audiences deeper into what she calls the “artistic experience.”

“Animation, like most art, takes you into a whole other experience that isn't quite reality,” she notes. “It's a place of imagination, and I think the blending of [2D and 3D] media builds into that space more to create a heightened reality, inviting you in, inviting the audience into the experience through the hands of the artists, whether that’s through a 3D animation, a painter's hand, linework drawn by hand; merging it all together is still an artistic experience.”

Dean hopes The Very Pulse of the Machine captivates viewers while igniting a fire in animators to explore new boundaries in animation and, even more than that, push past those boundaries.