Sarajevo-born, Montreal-based director delves into the production of her latest short film, including the collaborative process, paying homage to a cultural icon, and embracing the imperfections of stop-motion animation. 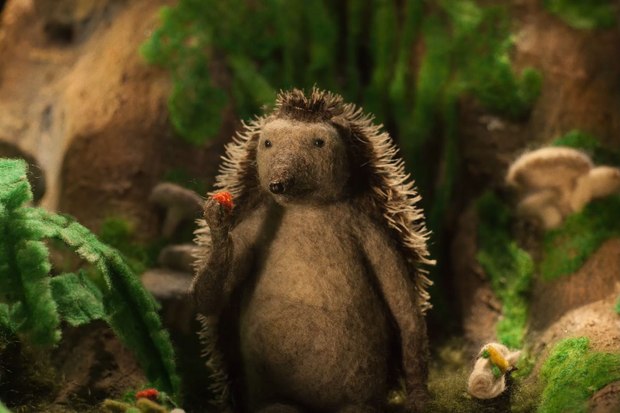 ‘Hedgehog’s Home’ directed by Eva Cvijanović. ©2017 All images courtesy of the National Film Board of Canada & Bonobostudio.

One of the short films that caught our eye at this year’s Ottawa International Animation Festival was Hedgehog’s Home, a needle-felted stop-motion short created for children that extolls the sanctity of hearth and home.

Winner of more than 15 international awards, including the Young Audiences Public Prize at Annecy, and an honorable mention for the Canadian Film Institute Award for Best Canadian Animation at OIAF 2017, Hedgehog’s Home was directed by Sarajevo-born, Montreal-based Eva Cvijanović. It is a co-production between Croatia’s Bonobostudio and the National Film Board of Canada, and was produced by Jelena Popović (NFB) and Vanja Andrijević (Bonobostudio), with the NFB’s Michael Fukushima serving as executive producer.

The 10-minute short, based on the classic story by Branko Ćopić, a writer from the former Yugoslavia, is a timeless and delicately choreographed tale that revives the notion of cultivating our own place of safety, dignity and comfort, no matter how big or small. Narrated by Kenneth Welsh of Twin Peaks fame, Hedgehog’s Home is the follow-up to Cvijanović’s 2013 2D animated short, Seasick, a dreamlike pen-and-ink maritime escapade that screened at TIFF earlier this year. Cvijanović was also previously a participant in the NFB’s Hothouse apprenticeship program for emerging Canadian filmmakers, where she completed The Kiss, in 2011. AWN had a chance to sit down with Cvijanović (pronounced ts-vi-ya-no-vich) during OIAF 2017 to discuss the making of Hedgehog’s Home, including the collaborative process, paying homage to a cultural icon, and embracing the imperfections of stop-motion animation.

Taking two years to complete from the pre-production phase beginning in 2014 through to completion, actual production for Hedgehog’s Home took place over the course of approximately one year. Lead animators Ivana Bošnjak and Thomas Johnson worked with an additional three team members -- Kata Gugić, Marko Meštrović and Dina Karadžić -- to create the sets and props and animate the film, while director of photography Ivan Slipčević and assistant director Miroslav Šimeg rounded out the production crew.

For Cvijanović, this was the first time she had worked with a group of collaborators to help bring her vision to life, an experience she found engaging and energizing. “It was good,” she says of the team effort. “I think it was very important that I was there [in Croatia]. Being there physically makes a huge difference, and I don’t think I could have done it properly without that. But it was really good, I really liked the collaborative aspect, and it made me kind of want to work like that again in the future. it’s less lonely, and it’s easier to get yourself motivated as well, I find.”

The collaborative process also forced Cvijanović to be “much more organized,” she says. “It also forces you to learn how to express your ideas properly. Which, when you’re working by yourself, you don’t really have to do so much. And maybe it’s good to have a certain distance for the project as well. It makes you more critical, and hopefully you come up with a better end result.” The film employed three primary sets -- the forest, Hedgehog’s home, and Fox’s home -- which were constructed with a modular design so elements could be pulled apart and reassembled as needed during the process of stop-motion animation. “Stop-motion is destructive, but that can also depend on the materials you’re working with,” Cvijanović explains. “We definitely had to plan ahead. We tried to be as organized as possible, but we still had to fix things along the way. But there’s also a beauty to not always being able to come back and fine-tune things. It forces you to do as much as you can, and it gives it a certain imperfection that is I think is very, very ‘stop-motion.’ I like the imperfection. It’s like that slight feeling you get when you can view the medium or technique -- I try to embrace that.”

Cvijanović opted to use stop-motion animation in order to pay homage to the look of the original story on which the film is based. “The story is very well-known in the former Yugoslavia, and the images from the book are iconic,” she recounts. “I didn’t want to recreate the visuals, so I had to force myself to step out of the 2D world, and I thought that making it in stop motion, right from the start, would force me to approach things a bit differently.”

So was Cvijanović solving a problem? “Yes. Exactly,” she underscores. “That’s what animation is all about.”

While Cvijanović doesn’t necessarily adhere to the daily discipline of the sketchbook, she does enjoy drawing by hand. “I like paper, or sometimes, if the paper isn’t working out, even using cut-outs, or using objects, or filming things,” she relates. “Anything, really, that starts with the tactile, tangible world. And then usually I will transfer that into the digital realm, and play around. For Hedgehog, for example, after the initial sketches I did the entire animatic using 3D software because it was easier for me to imagine a stop-motion space using something like [Autodesk] Maya.” Calling her 3D skills “basic,” Cvijanović still insists that they are good to have. “Working in 3D really helps me visualize space, which sometimes, just in an abstract way, can be difficult in 2D,” she says. “Working with perspective can be a headache, but working in 3D -- usually with just very simple shapes -- helps me visualize things in my head that I can later carry back to the 2D space. It’s like this little crutch that I picked up that later turned out to be solid.”

For her next project, Cvijanović is ready to veer off in a completely different direction. “I really, really enjoyed working with felt,” she says. “But I kind of like changing it up. Before I started working on Hedgehog I couldn’t wait to get my hands dirty and to start making things. And so I think that’s going to happen again. But I find that it’s really Important to shape the medium that you’re using to the story that you want to tell. So I think if I ever do stop-motion again it might be felt again, because I really, really like it. But I have no idea what that’s going to be.”

One idea still just beginning to germinate is as far from the woodland creatures of the forest as outer space itself. “It’s still in the very early stages of genesis, but I have an idea. I think I want it to be sci-fi, which will make it very different from Hedgehog’s Home. And it will probably be entirely digital. We’re trying to figure out a digital workflow. Maybe even working with vectors. There’s something about vectors that, in a weird way, feels very organic to me,” she confides.

“I’ve always been a huge fan of other worlds,” Cvijanović concludes. “And I also grew up on Star Wars...when I was little my dad would braid my hair into Princess Lea braids! For me, sci-fi is a wonderful way to visit our own reality through a fantasy world, and there’s just so much storytelling potential there.”