On the Edge: Experimental Shorts at OIAF 2016

Watch the trailers for six of the abstract and experimental short films that screened at the 40th anniversary edition of the Ottawa International Animation Festival. 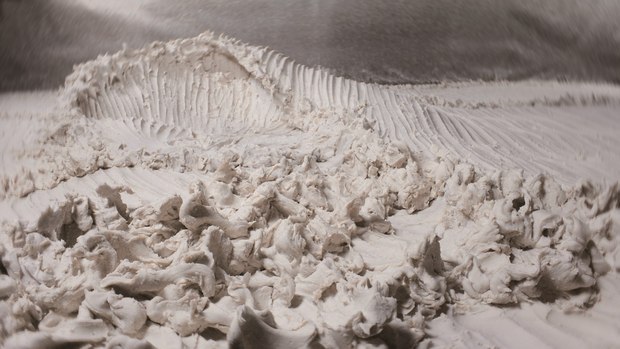 All animation is experimental, right? Well, some projects push that experimentation more than others, and this year’s 40th anniversary edition of the Ottawa International Film Festival had a fantastic lineup of experimental and abstract films that leapt off the screen to lodge themselves inside our minds.

The year’s Award for Best Experimental or Abstract Animation went to 2015’s Datum Point, by Japan-born, Montreal-based filmmaker Ryo Orikasa, with the jury commenting, “Loved the texture. The granularity of the sound and medium had a visceral quality. Poetic beauty and integration of text, texture and sound. It was mysterious. I don’t know what it was...but I was moved.”

Employing clay animation, the nearly seven-minute-long Datum Point was a big hit with OIAF audiences as well, producing cheers and stomps after its screening on Opening Night, and generating much buzz among festival-goers in the days leading up to the awards. The project was inspired by Japanese modern poet Yoshiro Ishihara, who is now remembered as a “poet of silence,” and once commented, “A poem is an impulse to resist writing.” According to Orikasa, this film is an attempt to seek out the landscape from his poem. The film is not yet available online, but you can watch Orikasa’s 2015 short, Writings fly away, on Vimeo.

And here’s a closer look at some of the other experimental and abstract films screened at OIAF 2016 that grabbed our attention: Running a little over four minutes, this experimental creation uses collage, engravings and ink directly on 35mm film combined with computer imaging to manipulate the film images further. Set to an atmospheric soundtrack merging random sounds, fragments of conversations and lively street music by Paris based sound recordist and sound designer Des Coulam, entitled “Jazz Trio in Rue Mouffetard,” the iconic image of a square is reiterated and transformed in an abstract environment of color and texture imbued with movement as the animated frames repeat in sequence across the screen. And since “iterate” is our drinking word, we were immediately smitten. Begone Dull Care 2015 updates the 1949 NFB animated short film by providing a visual representation of 80's style chiptune music through a dance of tightly timed abstract paintings and pixel-art. Utilizing a musical structure and pacing similar to the original, the 2D animated short melds Flash animation, photographs and acrylic paintings to become increasingly digitized and eventually devolves into one single video-game-like character devouring the final credit. A stylish and witty update to the original. Kamentsky creates kinetic sculptures which exist in the somewhat chaotic and messy real world and animated films for the screen where gravity is a bit less of a concern, using direct animation, where she draws and paints images directly on film stock, to invoke “the sweet spot where representation and surface push and pull each other like a two-headed lama.” The one-minute, 35-second If You Say Something See Something is drawn on found footage set to “Funeral March of a Marionette” by Charles Gounod and performed by Ergo Phizmiz. Haunting, funny and utterly mesmerizing. This one-minute short takes iconic art styles painted frame-by-frame to trace the history of art across the ages. According to Shu, “This work is about one minute of waiting, as the persistence of vision, every image from art history is one by one frame in the film. Art history is a long description. It tells us what has happened, but cannot tell us where are new possibilities. The specific image of each genius exhausted their life, is just a fleeting images in the film. The entire film is about waiting, waiting is absurd, as art, a kind of eternal behavior with no purpose, no ending.” It’s glorious. Winner of the award for Best Sound, Squame employs cast sugar to explore “the body’s sensitive envelope, the skin,” according to Brault. “The ephemeral animated desquamations, created with the help of sugar casts, evoke fragile landscapes in a world at the edge of abstraction. Somewhere between archeological artifacts and macroscopic observations, the friable frontiers of these human bodies elude our gaze.” Moving and powerful, the sound help propel this compelling work.