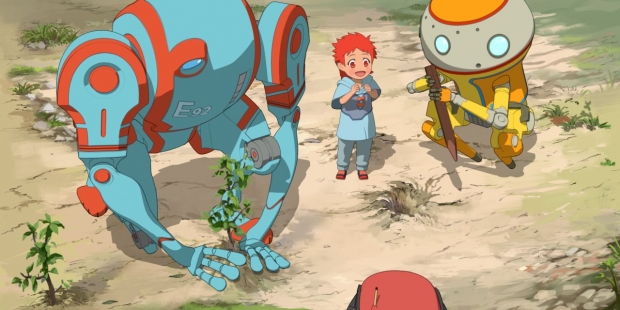 Though it began as a sci-fi-fueled fascination of the world’s technological advances, Netflix’s first original anime, Eden, eventually morphed into a story about the power of parental love, proving the possibility of coexistence between robots and humans.

“I wanted to make something that moved people to at least a teary-eye level,” says Justin Leach, Eden’s creator and producer. “I loved this idea of parents being fish-out-of-water and how, when you drop a baby into the mix, it changes people's lives in ways that are unexpected. I thought it'd be interesting to take that concept and apply it toward robots and see if that’s what makes them more human at the end of the day, when they have an experience that makes them feel compassion or start to care for a child.”

The CG short series, directed by Fullmetal Alchemist: Brotherhood’s Yasuhiro Irie and produced alongside Netflix by CGCG Studio and Qubic Pictures, premieres today on the streaming platform. Eden’s 4 episodes, each 25-minutes long, tell the story of a girl named Sara (Ruby Rose Turner), discovered as a baby by robots A37 (Rosario Dawson) and E92 (David Tennant) 1,000 years after humans have vanished from Earth.

The planet’s new robot-run “Edens” are ruled by the machine dictator Zero (Neil Patrick Harris), who forbids any talk or proof of human existence. But, taken off-guard by their unexpected feelings for the young Sara, A37 and E92 decide to raise Sara in secret as their adoptive daughter among other robots that share a love for their human creators. Leach, CEO of Qubic Pictures, served as a CG artist on Ghost in the Shell 2.0, a rigging supervisor for Star Wars: The Clone Wars, and producer for the anime short Kick-Heart. He first began developing the story in his head over 20 years ago after seeing Three Men and a Baby. “At the time, I was in my 20s and it was a concept I didn’t fully understand, but was just something I was interested in, along with looking at ourselves, humans, as an extinct civilization,” he explains. “Global warming and environmental issues, at the time I was thinking of this, were also just starting to be talked about.”

But Leach says there wasn’t an opportunity to bring the story of Eden to life until 2017, when the producer got his first chance to pitch to Netflix and, just one year prior, became a first-time father. “I had that experience of what it feels like when you have a child, and it totally changes the way you see the world,” he shares. “It made me feel more sympathetic to the role of a parent. Before, I was more focused on the science fiction aspect of the story and evolving A.I. computers. But now I was more interested in the emotional part of the story.”

Leach also believes that despite cinema being inundated with apocalyptic robot stories, from I Am Mother to the recent The Mitchells vs. the Machines, this is the perfect time for the story to be released. “I was worried everyone would be tired of robots by the time Eden came out, but after my son was born, I knew we had to focus on the characters in this story, and make something emotionally meaningful,” he says. “Now, Eden is coming out at a time when, after several pretty tough years, we all need a message of hope and can reflect on those things and try to make a better world.”

“Eden is a story about remembering who we are, rediscovering faith in both humanity and technology, and realizing that we’re not all that different,” adds Qubic Pictures’ Irene Chung, co-producer on film as well as head of story. “I immediately loved the world and characters Justin had been building for over a decade. Eden was a very different story back then, but the emotions, themes, and wish to bring the world closer through storytelling remain the same.” True to the team’s hopes for the show, Eden started connecting the world even prior to its Netflix release. The production team, as Chung puts it, is “an East-meets-West, 2D-meets-3D, traditional-meets-modern, hand-drawn-meets-computer kind of production.”

“The production spanned multiple countries and cultures, with the creative team in Japan, 3D production by CGCG in Taipei, 2D backgrounds by Nice Boat in China, and our project team in the U.S.,” Chung reveals. “Meetings often ran in 3 languages, with translators typing real-time into Google Docs to save time. So, bringing the nuances of Japanese anime aesthetics into Western animation technology wasn’t always straightforward.”

But, despite being from different countries and backgrounds, Eden’s team all had one thing in common: their love for classic 80s and 90s anime. “We tried to make even the title design for Eden look like the poster for Castle in the Sky,” notes Leach. “We wanted to capture that 80s Studio Ghibli style, as well as that Spielbergian aesthetic of the 80s. I grew up in that time frame and was very influenced by movies from that era.”

Movies like Nausicaä of the Valley of the Wind are represented by scenes of Sara riding through uninhabited deserts; viewers are taken back to Pazu and Sheeta’s adventures in the mysterious land of “Laputa” with Eden’s industrial structures covered with fresh greenery. The show is also influenced by the Japanese animations Robot Carnival and Ghost in the Shell, and with Cowboy Bebop’s Toshihiro Kawamoto spearheading Eden’s character design, Leach’s “Ghibli-Spielberg hybrid” anime has the simple, elegant aesthetics of classic anime with the fluid action shots and modern technology that help it fit right into Netflix’s arsenal of sci-fi stories. Plus, a smart, brave, and witty female protagonist doesn’t hurt.

“When I first read Justin’s original version, I was intrigued by the image of a girl riding her motorbike in an abandoned city,” remembers Kanako Shirasaki, who co-produces with Chung on Eden and currently serves as head of production at Qubic. “You don’t really see enough strong female protagonists in sci-fi, and writer Kumiko Uno did a fantastic job to make Sara so attractive, lovable, yet badass.”

While categorized as CG animation, a majority of Eden’s pastel backgrounds are hand-painted by Nice Boat and Wolfsmoke Animation Studio in Shanghai, with 70 percent of the series being locked shots, 25 percent being 2D pans and only 5 percent being full CG where the camera is moving all around.

“I hope that this artistic presentation will unite the people who love hand-drawn animation with those who prefer a modern look,” says Shirasaki. “Combining both formats represents the best of humanity and technology, like the story of Eden.” “I've always wanted to make an anime that appeals both to people who know Cowboy Bebop and Ghost in the Shell, and those that don’t, that doesn't isolate non-core anime audience members,” says Leach. “I would love for people that don't typically watch anime to watch Eden and enjoy it and be like, ‘Oh, wow, this anime stuff looks pretty cool.’”

But emotion is still at the center of Eden’s appeal and played a key role in the show’s design decisions. The production team utilized “old-school 2D anime tricks,” as Leach says, to bring out the emotion in Eden’s characters, such as animating specular highlights in the pupils of characters' eyes that shake as the camera gets closer. And the friendly designs of Eden’s common robots--those not controlled by Zero--were meant to add to the welcoming feel of this animated world, despite its darker, apocalyptic themes.

“My natural style is more towards warm and ‘round’ shapes like Toriyama Akira, the father of Dragonball,” says concept artist Christophe Ferreira, who created the initial image boards and robot designs of E92 and A37. “I have a hard time drawing really horrible or clearly evil things.” “Eden feels like a very classic and warm story to me,” adds Clover Xie, co-founder of Wolfsmoke and Eden’s background art director. “I have been in this industry for nearly 20 years and Eden is one of the most complicated projects I have participated in. What’s most interesting to me is the process of seeing all these parts made by each person and finally synthesizing a finished product. And everyone did great in their parts to make this animation even better.”

Looking back on the journey, Leach says it’s been a painstaking process bringing Eden to fruition after all these years, and it’s still surreal getting to see it finally released. “Even when I watch it myself, and I've watched it several times, I make myself cry,” he admits. “I feel so lucky. I just keep saying to myself, ‘How did this happen?’ Sometimes I had to pinch myself. I hope that it can move people. Everyone put their heart into it, and I think that's all you can do as a filmmaker. Just pour your heart into it and do what inspires you and then, hopefully, people can enjoy it.”

Animated Characters: The Art of Babbitt – Part 1
Bruce Smith and Ralph Farquhar Talk ‘The Proud Family: Louder and Prouder’ Season 2
VFX is the ‘Thing’ for Tom Turnbull on Tim Burton’s ‘Wednesday’
We Need to Chat
Choc Chip Animation Riffs on Pop Culture in ‘The Art of Murder’
F is for Flake: The (Not So) Great Animation Robbery?
Re-VIEW: ‘Avatar: The Way of Water’ – A Miraculous Vision
‘Kung Fu Panda: The Dragon Knight’ Celebrates a Special Lunar New Year
END_OF_DOCUMENT_TOKEN_TO_BE_REPLACED