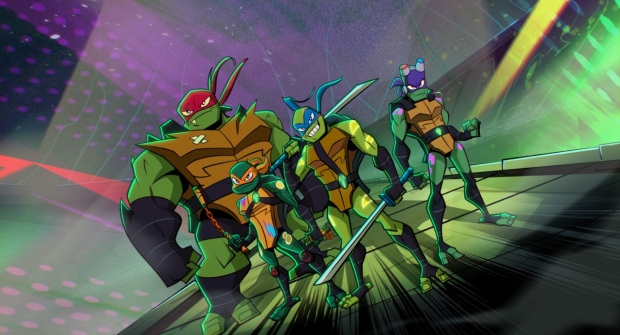 Among Nickelodeon’s most notable TV reboots, from The Patrick Star Show to Rugrats, Rise of the Teenage Mutant Ninja Turtles, the fifth TMNT series to join the franchise, is one of the most exciting. The Annie Award-winning show, which aired back in 2018, focused on the Ninja Turtle brothers’ early teen years, when they were still honing their team combat skills as heroes in training. The 2D series also reveals the secret past of Master Splinter.

When Rise was renewed for a second season, both Nickelodeon and series creators Andy Suriano and Ant Ward’s plan was for the story to span 26 episodes, with a movie to follow. But, later, the episode count was reduced, and Rise came to a close after the second season’s 19th episode.

“We left a lot of threads hanging in the series that we had intended to follow through with,” says Suriano, who also served as main character designer for the series, modeling the geometric animation after the French and Belgian comic books he and Ward are so fond of. “And, in some cases, we felt like we didn't quite do justice to some of the storylines. Some of them we just had to move on from.”

But now, two years after the rebooted series concluded its initial run, Rise of the Teenage Mutant Ninja Turtles: The Movie premieres on Netflix today, Friday, August 5, giving Suriano and Ward the chance to tie up loose ends.

“It was an opportunity to play off some of those dangling threads that we had teased and dropped in the series throughout both those seasons,” says Suriano. Ward, who also served as a producer on Ciro Nieli and Joshua Sternin’s 3D animated Teenage Mutant Ninja Turtles, adds, “But, at the end of the day, we wanted the movie to be super accessible to Rise fans, Ninja Turtles fans across the spectrum, and new audiences who've never seen anything Ninja Turtles at all. So, it was about creating a fun, action-packed adventure with a lot of heart.”

RTMNT: The Movie takes place two years after Shredder's defeat. When a mysterious stranger arrives from the future with a dire warning, Leo is forced to “rise” and lead his brothers, Raph, Donnie, and Mikey in a fight to save the world from a terrifying alien species – the Krang.

“We actually went into development on the movie while we were still in Season 2 production,” explains Ward. “So, we had this whole Season 2 arc that we were going to be finishing up, and then the movie was going to be taking place after that. When we truncated Season 2, we were still working with the movie at the same time, so some of those ideas started to cross-pollinate a little bit. We definitely wanted to close the door on some things for Season 2. And, in doing so, it left some interesting challenges going into the movie.”

As Suriano and Ward were wrapping up Season 2, the movie had been in development for a year and, around January 2020, there was, what Suriano refers to as “a complete creative re-pivot” on the movie. Though some things were quartered to the movie that just couldn't change – such as the presence of Krang and Casey Jones – the creators went to a page one rewrite and made the whole film during the pandemic.

“It’s been one of the fastest productions of any animated film for sure,” says Suriano. “But I think we made a really fun family movie. This show has a very specific message and thematically it's about family and about relationships and what it looks like to have a modern family, what it looks like these days with our children and their friends. So that was definitely the nucleus of what we had and we proceeded to build on everything from there.” Both fathers themselves, Suriano and Ward were passionate about family always being at the core of their Ninja Turtles stories, during the years they worked on both seasons of Rise and now with the long-awaited feature film.

“It was a very enjoyable experience to get a sincere sibling relationship going that very felt very organic,” says Ward. “I think it's incredibly identifiable with not only kids, but it’s also multi-generational. When Kevin [Eastman] and Peter [Laird] originally created the property, there was that sense of family built into it. And then, through every iteration, that has been constant.”

And the goal with RTMNT: The Movie was to bring that theme of family into an action-packed, heartwarming comedy that appeals to TMNT fans of all generations. It’s Ward and Suriano’s way of going out with a bang. Or, maybe more appropriately, a high-powered karate chop.

“It's fun, it's action, and the fact that these are anthropomorphic creatures, and not humans, there's also a certain amount of escapism that anybody can put themselves there,” notes Ward.

Suriano adds, “The movie is 100 percent a love letter to fans; fans that have been with us through Rise, maybe new Rise fans that didn't quite get it at first but have come over to the fold, so to speak, and then especially to just classic Ninja Turtles fans. There are some classic Ninja Turtles themes in this movie and a lot of characters that old fans are going to recognize and see again through the lens of the Rise universe.” While this film will be the final wrap-up of Rise, both Ward and Suriano are fairly certain this isn’t the last TMNT reboot and are hopeful that this won’t be the last one they will get to be part of.

“Nickelodeon obviously has a lot of interest in keeping this franchise going and keeping it fresh,” says Ward. Suriano agrees, “Thematically, I think there are a lot of things for a lot of people that they can connect to. There’s a lot of wish fulfillment and a lot of humor and a lot of heart. And, you know, obviously the spectacle of ninjas fighting in the sewers. That’s the dream.”