‘Duck Duck Goose’ Flies to the West with Netflix 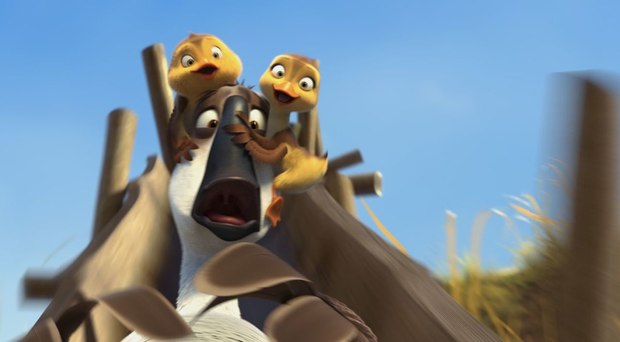 The unlikely trio of Peng, Chi and Chao band together in Original Force’s ‘Duck Duck Goose.’

With its July 20th Netflix release, Chinese animation studio Original Force’s CG-animated Duck Duck Goose has finally reached a U.S. audience. The film, directed by industry veteran Christopher Jenkins (Home, Surf’s Up, Open Season), who also co-wrote the film with Rob Muir, centers on a carefree bachelor goose named Peng, who after being injured and unable to fly, finds himself saddled with two demanding ducklings, Chi and Chao, and -- with winter approaching -- the trio face dangerous predators and terrain on their journey to reach their respective flocks.

Duck Duck Goose was produced with an estimated budget of $30 million, much less than most major U.S. animation studio productions, but far more than most independent animated films, especially those financed and produced in China, which depending upon whom you talk to, hover around $10 million. Released in the Middle Kingdom this past February to a disappointing $4.7 million gross, the film has made another $8.4 million in nine additional international territories. Now, however, through the Netflix streaming platform, the film has finally reached the broader audience its filmmakers have been hoping for, and anticipating, since the inception of the film.

For Jenkins, the film’s biggest challenge was just getting the joint Chinese-American production finished under the limited budget at hand. “To have actually even completed a movie as a sort of co-Chinese-American project, it’s a big deal, as you know,” the director comments. “I was completely unprepared for how the collaboration would work. I just went into it with as much optimism and energy as I could.”

With pre-production being handled in Culver City but production taking place at Original Force’s main studio in Nanjing, Jenkins traveled back and forth between locations, which made it more difficult to get timely executive feedback from Zhao. “Harley, our CEO, was in Nanjing most of the time, so we didn’t have the same kind of back-and-forth you’d normally have when the head of the studio, like a Jeffrey Katzenberg, is just around the corner, and you put on regular screenings to get needed feedback,” notes Jenkins. “You sort of take a leap of faith, knowing that expectations can be very different [in China] with every screening you actually get to do.”

In the film’s early stages, as Jenkins, along with Muir, were re-writing the script, they were passing pages to production almost as fast as they were completed. The director explains, “We had returned to a treatment I’d previously written -- we re-wrote the script from the ground up. The pages for individual scenes were still warm off the photocopier when we passed them to our story artists. That was a big creative challenge, because what you’re doing is like designing jigsaw puzzle pieces without knowing what the whole picture looks like, then having to piece them all back together down the road.” Though Jenkins’ expectations were tempered by the film’s modest budget, compared to major studio films he’d work on previously, he realized early on that despite the financial challenges, Original Force was more than capable of producing the quality of animation he and the producers were hoping to achieve. “We did an early animation test,” he recounts, “where we didn’t have finished rigs or pretty much anything. Everything was improvised. But it came together and looked really beautiful. Up until that point, I didn’t know what to expect. Coming from big studios, with big budgets, I thought, well, a lower budget film would have a slightly less refined look, and that’s fine… let’s try to tell as good a story as we can. But when the tests came back and I saw the quality of animation, what the Chinese animators were already doing, I knew right then a different kind of film was possible.”

Writing with his producer’s hat on, Jenkins was able to shape the story to fit ever-present time and budget constraints. “You’re a bit of a puzzle master, using every trick up your sleeve, some of your technical knowledge, slight of hand, knowing how important one scene is compared to the next,” he explains. “For example, while water effects would originally have been everywhere, it was easy to cut back on some and have the geese on the ground instead of the lake. That made a difference when it came to the water scenes we had to do -- we could spend more time on those because I’d cut elsewhere. I was able to write knowing some things had to be made simpler in order to get done.”

Part of the inherent difficulty Western directors often face working in China lies in bringing that sense of competitive collaboration to animation teams that are much more individual task and assignment-driven. For Jenkins, working with the Original Force animation team was one of the most enjoyable, and successful parts of the project. “I really enjoyed being there,” he enthuses. “It’s very different. Some of the people there tended to work more individually. I tried to jazz things up a little, so they would stand up and look over each other’s shoulder, to see what the next person was doing, to know that continuity was important, to be inspired by what somebody else did. Have a little competition about making something look better. All of those things started to build very, very quickly.”

Jenkins continues, “They really came to achieve the look we wanted, specifically the acting. The fact was that there were really talented animators and artists there, and one of the joys was actually discovering that. And bringing it forward more, getting people to be less shy about how they saw the scenes, let the artist show you how it can be better. That really did happen. It was wonderful. There are scenes where there’s a real soul, particularly in the ducklings.”

For Jenkins, regardless of the challenges, directing the film alongside Rabins, Finkelman Cox and the Original Force production team was a wonderful experience. “Working with Sandy and Penny was always a joyful process, from the very beginning. We accomplished something extraordinary. We really did, and I know that to be the case. We have this thing in animation where we’re hard on one another, always wanting to do things better, do things differently if we’d had the chance. If you had more time and more funds, you’d make the scene transitions work a bit better, heighten the action breaks a bit more. But, this movie is made for kids and they love it. So, we did our job.”

“We are very happy with the quality of this film,” Rabins adds. “We made this movie for a price, and 100 percent of that price is on the screen. We proved you can make a quality film for much less than DreamWorks or Sony. Even the Illumination model is twice what we spent.”

Finkelman Cox concurs with the sentiment. “Like every film, it had its ups and downs,” she notes. “But our crash-and-burn was pretty minor on this film. We are very proud of this movie. And Harley is proud of it too. It was a major accomplishment. It was two very different cultures finding common ground to work together.”