DreamWorks Gets Down to Business with ‘The Boss Baby’

Imbuing the Oscar-nominated movie with a sense of nostalgia, animators and VFX artists drew on cartoon tradition while experimenting and pushing the cutting edge of technology to get the right look. 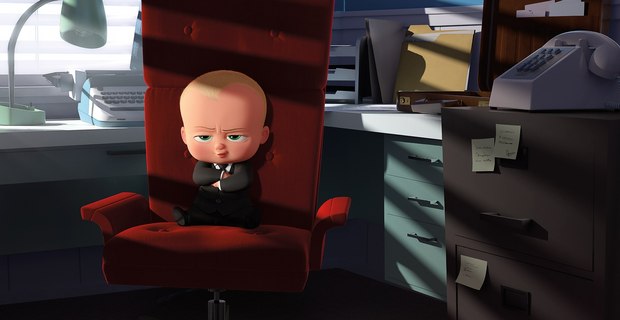 DreamWorks Animation’s The Boss Baby was a cry of freshness when it arrived newborn March 31 in theaters, turning audiences into cooing admirers on its way to the bank with a worldwide gross just shy of a cool half-billion and an Oscar nomination for Best Animated Feature.

Directed by Tom McGrath, a DreamWorks veteran whose helming credits include the Madagascar trilogy and MegaMind, and produced by Ramsey Ann Naito, the film starred Alec Baldwin as the newborn baby boy whose brother Timmy discovers he is really a high-powered executive on a secret mission to ensure babies remain more popular than puppies.

Adapted from Marla Frazee’s popular children’s book by Michael McCullers, the film also features the voices of Jimmy Kimmel and Lisa Kudrow as the boys’ parents, Miles Bakshi as Timmy, Tobey Maguire as narrating adult Timmy, and Steve Buscemi as Francis Francis -- Boss Baby’s rival with a plan to make puppies the most popular of all.

One of director McGrath’s goals was to evoke the charm and nostalgia of classic animation, in particular the work of Chuck Jones, animator of countless Warner Bros. shorts and such classics as How the Grinch Stole Christmas. Animation director Carlos Puertolas says the animators watched a lot of classic cartoons -- basically embedding the style in their brains by osmosis -- but then found in practice that adapting that style to CG animation was harder than it first appeared.

The film’s VFX supervisor, Ken Bielenberg, says McGrath’s desire to keep the look as simple as possible meant more than just not rendering every blade of grass or leaf in a tree, but to try to group those things together and give them a simpler collective shape.

“In the classic Chuck Jones animations, oftentimes the backgrounds would get somewhat painterly and the characters would really pop over the background,” he say. “So we were trying to achieve that.”

Finding the right balance involved trial and error, with more traditional matte-painting animation backgrounds found to not work as well with the look of the characters.

For the Boss Baby, the animators were charged with a character who has to have the external toughness and discipline of a business tycoon while still also being a cute baby.

“We rely on strong posing,” says Puertolas. “When we were able to remove real physics, we’d just play with more of a pose style. Other times, we will be blending back to more of a realistic pose, depending on the scene. We had the room to go both ways.”

To make Boss Baby look like an iconic businessman, animators looked at reference that included some of Baldwin’s earlier movies as well at classes aimed at helping business leaders improve their presentation skills through techniques such as hand gestures.

“We didn’t want him to feel like a businessman inside a baby,” says Puertolas. “There is a part of him that is a baby.… We were imagining him as if he has the energy of a businessman -- he has a cup of coffee and is ready to work -- but he has the limits of the tiny legs and tiny body.”

One of the more fun elements of animating Boss Baby was dealing with the jiggle and roll of baby fat. The animators started trying to incorporate what they had seen in reference video of babies into their animation right from the start.

“When we saw them in dailies, we’d be like, ‘That’s great!’’ says Puertolas. “It makes it really funny, so we would keep pushing that idea.”

The animators ended up with a specific control in Boss Baby’s cheeks for the jiggle, as well as some controls in the arms and legs to control the way the skin folds. “It’s a combination between a really technical thing that goes under the seams, with a really organic thing of watching reference of a baby doing funny things,” says Puertolas.

Boss Baby’s natty wardrobe and immaculate grooming is, to say the least, atypical for the average baby. With his suit being as iconic to his character as any superhero’s colorful costume, it required some special treatments to keep it wrinkle-free.

“When we fit it and we modeled it, we knew it would work,” says Peurtolas. “As we were animating it, we were starting to realize if we put in too much simulation, it starts getting a little too realistic and it’s folding too much.” Animators often posed the suit itself, adding shadow simulation when needed to keep the suit’s shape from competing with the shapes the animators were creating.

Among the most unusual sequences in the movie are Timmy’s fantasy sequences, which McGrath wanted to look like they came right out of a boy’s imagination. Puertolas says they knew immediately that doing the sequences the way McGrath imagined them was not going to be possible within the pipeline that would be used to animate the bulk of the movie.

There was one particular artist McGrath wanted to work with in the fantasy sequences, and integrating it into the main pipeline was not always easy. “It took a bit of work to figure out how to work with this particular artist and accept his material and then figure out how to get it back into the (main) pipeline,” says Bielenberg. “Ultimately, we treated it more like matte paintings -- we would get artwork from him and then push that through the painting department and they would do whatever projections and other things they would need to do to get it back into our pipeline.”

For the sequence in which the audience sees where babies are made (i.e., up in the clouds, pervert), the effects team used soft lighting to take as much directionality out of the source as possible. The babies moving along on treadmills also was took some exploration to figure out. “We had problems with the characters not staying in sync with the treadmills,” says Bielenberg. “Some of the smartest minds at DreamWorks were trying to figure out why they were sliding.”

Additionally, they had to make sure that the soon-to-be-born kids -- all in their birthday suits -- were appropriately covered up. “We grew soft fur on the conveyor belts long enough so that it would hide the things that we didn’t want the audience to see,” Bielenberg says.

Another fun scene to work on was when Boss Baby faked being sick, spewing faux vomit to escape from Eugene, voiced by Conrad Vernon. “It wasn’t so much a technical problem or a challenge, but more of an aesthetic challenge of making it feel like this fake vomit that they had concocted,” says Bielenberg. That involved simplifying it and making it not not too detailed and mixing in sprinkles that represent the cereal the boys added to the mix. “Making it still feel fun without being gross was the real challenge there.”

“It was definitely an animators’ kind of movie,” says Puertolas. “The animators working on the movie were really excited, because you don’t (often) get to animate things that are so out of the box.”