Voice-over artist Tara Strong steps into the shoes of the legendary June Foray for Amazon Prime Video series ‘The Adventures of Rocky & Bullwinkle.’ 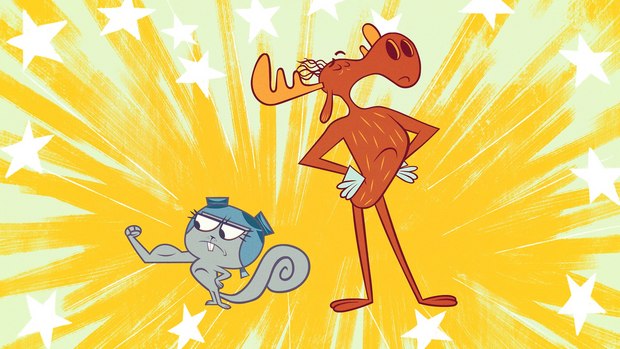 Produced by DreamWorks Animation Television, 'The Adventures of Rocky & Bullwinkle' debuts May 11 on Amazon Prime Video.

If you remember when TV cartoons aired only on Saturday mornings or in oddball daytime syndications time slots, then odds are your cartoon pantheon includes Rocky and Bullwinkle.

Created by Jay Ward and Alex Anderson, the world-famous duo of moose and squirrel -- and their foes Boris, Natasha and Fearless Leader -- rose to fame in the animated series Rocky and His Friends on ABC from 1959-1961, and then moved to NBC as The Bullwinkle Show through 1964. Its wry wit and absurd sense of humor won over generations of fans, many of whom found the show airing in syndication, on cable and home video for years after its original run. “Rocky and Bullwinkle and also Boris and Natasha, in my cartoon world, were up there with Bugs Bunny and Mickey Mouse and Scooby-Doo -- the real legends of the cartoon world,” says Fellows. “I usually create my own shows and run them, but this was something I thought was very fortunate and lucky to fall into my lap.“

This is far from the first attempt to reinvent the kooky duo for a new audience. Previous attempts including hybrid feature films and a DreamWorks-produced CG short failed to capture fans’ attention the way the originals had. While Fellows looked at those efforts, he spent little time analyzing why they failed and instead relied on the successful approach he picked up reading about the original Termite Terrace animators at Warner Bros., which included Chuck Jones, Bob Mckimson, Friz Freleng and Bob Clampett. “(They said), ’We just made what made us crack up, what made us laugh,’” Fellows says.

But perhaps the original series’ greatest legacy was providing most likely the signature role for animation voice acting legend June Foray, whose uniquely cheerful and nasally delivery she reprised in nearly every iteration of the show through her death at age 99 in July 2017.

Replacing Foray is a tall task, and Fellows turned to a modern animation voice-over legend in Tara Strong. One of the most prolific voice actors in animation, Strong has voiced hundreds of characters including such iconic roles as Bubbles on the original Powerpuff Girls, Dil Pickles on Rugrats, Batgirl on The New Batman Adventures, Timmy Turner on Fairly OddParents, Raven on Teen Titans, Omi in Xiaolin Showdown,  Ben Tennyson on Ben 10 and Twilight Sparkle on My Little Pony: Friendship is Magic.

”They initially said they did not want a soundalike. They wanted (Rocky) a little bit older, a little more clever and really making fun of Bullwinkle in certain instances,” she says. “As the show went on, it really became more of June's vision and I just turned into June about halfway through. Maybe, as she passed, she kind of jumped in my body, and said: ‘Nope! They're supposed to be this way.’” That evolution led to a rare instance of Strong getting to re-record lines for the earlier episodes after recording several episodes and finding the right balance for Rocky.

“We realized that her voice even by the sixth episode had really found a groove,” says Fellows. “So we went back -- almost college-film style -- and redid a lot of the lines in the very first episodes, because she wanted to make sure that the first time everyone hears Rocky that they really feel that connection with June and are laughing as much as they did back in the ’50s.”

Strong says that was a rare opportunity that she appreciates. “(Scott) let me do as much as we could, within the timeframe of getting it done, so hopefully it's close enough that people don't go, ‘That doesn't sound anything like the later episodes!’”

The new series is structured for the modern streaming audience, with the initial 13 half-hour episodes divided into three movies -- or arcs, as Fellows calls them -- running four or five episodes each. That allows for what he calls “mini-binging,” where parents can let kids watch an arc and get a satisfying chunk of the series without spending six and a half hours in front of the television. Plus, it offers a wide canvas on which to have Rocky and Bullwinkle -- usually unwittingly -- save the world. “It really gives a terrific option for storytelling,” he says.

It also pays tribute to the original series’ then-unique serialization. “If you remember the original, sometimes the recaps were longer than the bits themselves,” says Fellows.

The characters’ legendary status brought out the best in everyone who worked on the show, Fellows says. The designs by art director Chris Mitchell bring a modern look to the series, while the animators at DHX in Vancouver put in extra effort to make the 2D animation stand out.

“Everybody worked extra hard to make sure that that Rocky and Bullwinkle are where they belong: Back in the pantheon of cartoon characters,” says Fellows.