‘Dragons: The Nine Realms’: A Modern-Day Twist on the Boy-Meets-Dragon Tale 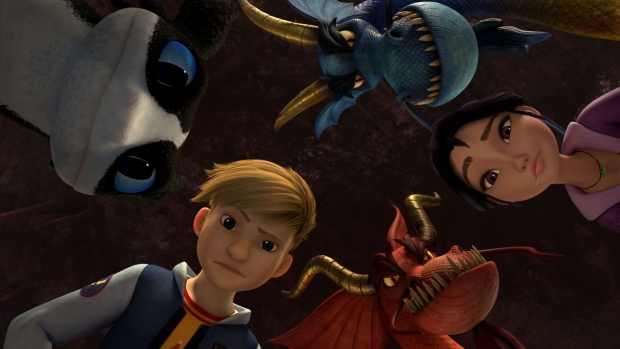 After three feature films, five short films, and three television series focusing on Hiccup and Toothless, the land of Berk, or the larger Viking and dragon empires, DreamWorks Animation takes flight with dragons once again. But, this time, they’ve traveled 1,300 years into the future.

The Academy Award-nominated and Golden Globe-winning How to Train Your Dragon franchise has never set foot outside of the Middle Ages, but starting today, it finds itself in the modern-day world with a new take on the boy-meets-dragon story.

“There was talk for a good amount of time about what could happen with the franchise,” says the series’ executive producer and showrunner, John Tellegen. “We’re always looking to expand the landscape of the franchise and one of the ideas was to bring it into the modern world, and to follow some modern-day kid characters. At some point, DreamWorks said, ‘Yeah, let's do that,’ and we jumped into figuring out what that world would look like, how it would feel, and how we could harness the tone of the show, moving it from the Viking lands into a modern-day setting.”

The six-episode CG animated series takes place in a world where dragons are thought to be merely characters of legend. That is, until a geological anomaly opens up an immense, miles-deep fissure in the Earth’s surface. As scientists from all over the world gather at a new research facility to study the mysterious phenomenon, Tom Kullersen arrives with his mom, a head scientist at the lab.

Soon, Tom and a group of kids also brought to the lab by their parents uncover the truth about dragons and where they’ve been hiding – a secret they must keep to themselves to protect what they’ve discovered. As a How to Train Your Dragon fan, Tellegen says it’s been “to put it bluntly, amazing” getting to sit in a producer’s chair on this latest Dragons installment.

“My first job at DreamWorks was as a writer on Dragons: Race to the Edge,” he explains. “I was already a fan of the franchise, but immersing myself in the show for that series, and then having the opportunity to bridge over to Dragons: Rescue Riders and continue working in that space was just wonderful. So, when DreamWorks came to me to go after a modern-day version of the show, I absolutely jumped at the chance.”

From the beginning of the project, Tellegen says it’s been a priority for him and the team to keep the integrity of How to Train Your Dragon alive and well in the new series while also taking the opportunity to touch on more timely topics.

“I cherish this franchise and I write and produce [Dragons: The Nine Realms] with the respect and love that I feel it deserves,” notes Tellegen. “On one hand, in the modern day, kids and adults have different points of view than they did back in the Viking times, so we're able to touch on more contemporary thoughts around protecting animals, protecting the environment, and how important that is based on what we know today.”

He continues, “On the other hand, while certainly, in modern-day, buildings are different from Berk, we looked at ways to incorporate more wood and organic materials that would visually tie back to the other series and so it does feel like a cohesive design language.” And a big part of that design language was the iconic, somewhat awkward-limbed character design of the original films and TV series, still present in Tellegen's modern dragon world.

“We focus with characters on some of the exaggerated proportions from the franchise,” he reveals. “We looked at the feet and legs, the heads, and how those proportions are in the other iterations. We wanted to follow those so that it felt like they were characters from the same world.”

One of the bigger challenges the production team came across was tackling yet another story about a boy and his dragon and not relying solely on the show’s modern environment to make the story feel different and fresh. In the end, it came down to creating a night-and-day contrast between Tom’s personality and Hiccup’s.

“We modeled Tom to be more of a lone wolf and more sure of himself than Hiccup ever was,” says Tellegen. “It created a fun dynamic for our main lead character, where he has to learn how to lead and not be so overconfident, whereas Hiccup was always searching for that confidence. Tom is very self-assured, and that creates a lot of lessons for him in his journey with his dragon Thunder.”

He adds, “I also feel like this series is a bit more of an ensemble than Race to the Edge, which was very Hiccup-centered. This show is centered around Tom and Thunder and their journey, but I feel our other ensemble and supporting characters have very fleshed out arcs as well, perhaps a bit more so than what’s been done in the past.” Having spent time in the DreamWorks Dragons universe before, Tellegen was particularly aware of the added pressure to do a show like this right and, despite some skepticism he’s seen from long-time How to Train Your Dragon fans, he believes this new show has done right by the world so many have come to know and love.

“Some of the legacy fans I've seen online are a bit concerned about this new iteration and I just want them to know that I am also a huge fan of this franchise,” he says. “My goal has always been to maintain the heart and the soul of the franchise, but also to tell this new story, have new dragons, and new ideas for our fans, as well as some Easter eggs for our legacy fans, so that they feel like the time that they spent in the franchise was well worth it.”

In Tellegen’s opinion, once fans get on board and start watching, they will feel their time was well spent on this new show as well. “Not to spoil anything, but there’s some questions left unanswered that we might tackle in the new series, which is always fun. Just because we’re 1,300 years in the future, doesn't mean there won't be some surprises from the past.”