For producer Hiroyuki Kobayashi, Netflix’s seven-episode anime adaptation of Capcom’s 2012 video game is much more than just one man’s quest to slay the dragon that killed his family. 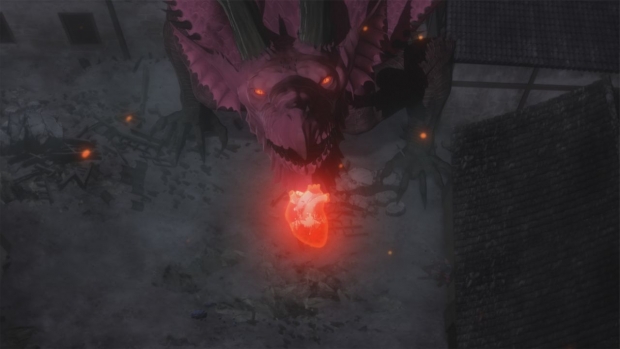 Amidst burning buildings and raining fireballs, a man named Ethan, bloodied and limping, makes his way down a smoking alley. A pregnant woman appears out of the smoke in front of him, humming, and he calls out the name, “Olivia.” She turns, Ethan smiles, and then Olivia turns into flakes of ash, carried off by the wind. In her place appears the two red eyes of a dragon.

The first couple minutes of Netflix’s newly released anime Dragon’s Dogma, adapted from Hideaki Itsuno’s 2012 Capcom video game of the same name, doesn’t waste any time in setting viewers up for a shockingly emotional and epic journey. There are seven episodes in the series, each representing--by title and story--one of the seven deadly sins, as embodied by a monster.

“When Netflix producer Taiki Sakurai sent me a proposal about making Dragon's Dogma into an anime, the seven deadly sins concept was so interesting that I approved it straight away, and it went right into production,” says Hiroyuki Kobayashi, a co-producer on the show and co-producer of the Dragon’s Dogma video game. “Even back when we were developing the original game, I'd always wanted to make a television series version. Unfortunately, we never had the chance until now. I'm so glad we've been able to create an anime adaptation on Netflix.”

Netflix’s Dragon’s Dogma follows the part-redemption-part-revenge story of Ethan, who has his heart stolen by a dragon and then wakes up to find he has become an “Arisen,” the one destined to defeat the dragon and stop the apocalypse. Fueled by his hate for the monster who burned alive his wife Olivia and unborn child, and ate his adopted son, Ethan vows that the dragon will die at his hand. Joined by a type of battle aid, or “Pawn,” who Ethan names Hannah, the two face off against a gluttonous cyclops, greedy lich, lustful succubus and more demonic beasts on their way to the dragon’s lair to retrieve Ethan’s heart. The Dragon’s Dogma video game, which pulled inspiration from Western games such as The Elder Scrolls IV: Oblivion, was Capcom’s first open-world RPG game, where a player can approach objectives freely and explore anywhere on the game’s map at any time. Though the seven deadly sins angle helped to amplify some of the game’s original themes, Kobayashi says it was an immense challenge to fit such a massive open-world action RPG into a seven-episode adult anime.

“The world, places (such as Cassardis village), and monsters are from the game,” says Kobayashi. “However, there are some differences as far as the anime's setting goes, and the characters and the story are anime originals.”

But despite the changes needed to make a feasible and linear anime, the 3D GCI used in the Dragon’s Dogma anime adaptation helps bring forth a nostalgic essence to the explosive fight scenes between the Arisen and the many monsters that slither and stomp their way into his path of vengeance.

“We wanted the anime to have the same look as the game world, and that included the battles against monsters,” Kobayashi explains. “Since we also provided the game data to the production team, I think we were able to recreate the Arisen, monsters, and Pawns, as well as produce action scenes, in an efficient manner. The 3D animation allowed us to express the presence, strength, and destructive power of the dragon in ways that created intense three-dimensional scenes.”

In addition, the 3D animation creates a fluid visual and feel to more peaceful settings as well, like foggy, snow-capped mountains, moon-lit water pouring out of the tops of trees like a glistening chandelier, or glowing weapons, like Hannah’s bow and arrow, misting magical auras. But the action scenes are the backbone of Dragon’s Dogma’s animation, and the production team also included some familiar scenes as a tip-of-the-hat to long-time fans of the video game. “The battle scenes with the monsters are all great, but I want viewers to keep an eye out for the battle with the Griffin because it recreates the game scene really well,” notes Kobayashi. “And the scene at the beginning where the dragon steals the protagonist's heart, and when Hannah appears for the first time are very close to the feel of the game. I think the people who played Dragon's Dogma will enjoy those scenes.”

Kobayashi has created other anime adaptations of video games he has produced, from Resident Evil to Devil May Cry. But what he says he’s found unique about the Dragon’s Dogma production is getting to use the adaptation as a chance to focus on the story’s take on humanity. Much like Netflix’s Castlevania, another anime adaptation of a video game, Dragon’s Dogma shows the worst of society--with no shortage of nudity and gore--but it’s all for a greater purpose.

“I really like how the protagonist lives his life after the dragon steals his heart and he becomes the Arisen,” says Kobayashi. “I like the sword and sorcery action...but I want to make viewers think about what it means to be human. I'm so glad we've been able to tell this original story.”

“I believe this anime fully expresses the flashy action as well as the uniqueness of the characters and monsters,” he adds. The other goal, Kobayashi, continues, is that Dragon’s Dogma piques the interest of viewers who have never played the game. “Even if viewers don't know anything about the game, I'm sure they'll find the anime world, the Arisen, the Pawns, and the monsters quite engaging through all seven episodes. And they will probably want to play the game afterward!”