Disney’s ‘Firebuds’ Teaches About Heroism in Everyday Acts of Kindness

Emmy Award-winning creator and EP Craig Gerber's new animated musical adventure, about a team of young children of first responders and their talking vehicle sidekicks, helps kids learn what it truly means to be a hero; series launches today on Disney Channel, Disney Junior, and Disney+. 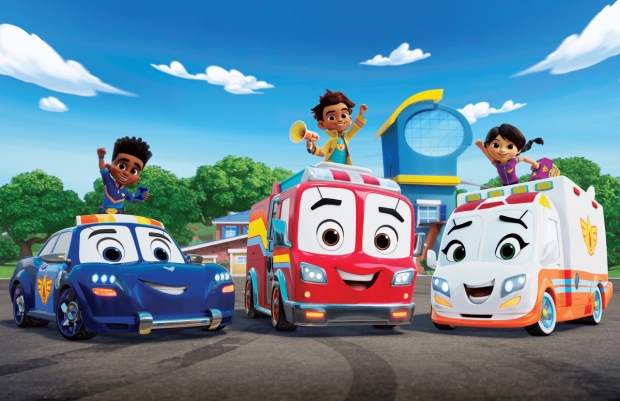 After spending almost two decades in the world of princesses and fairies, kids’ animation writer Craig Gerber, known for producing shows like Sofia the First and Elena of Avalor, was looking for a new challenge. As it turns out, inspiration for his newest series – Firebuds – was right in front of him, running around in a fireman’s cap.

“It came from my youngest son, Beau,” says Gerber. “He's now seven, but when he was three, he was obsessed with fire trucks, and he used to dress up in a fire chief outfit and walk around carrying the fire truck and talking to it like it was his best friend. I thought to myself, ‘Wow, how happy would he be if this truck came to life and was his best friend?’ The idea for Firebuds sprang from that, to do a show about the children of first responders and, more specifically, about a boy and his best friend fire truck.”

Gerber’s new music-filled series, produced by Disney Television Animation and Electric Emu, premieres today, September 21 on Disney Channel, Disney Junior and Disney+. The show follows a boy named Bo and his fire engine best friend Flash, as they team up with their friends, Violet, Axl, Jayden, and Piston – all children of first responders – to help their community with problems big and small.

Though Bo – named after Gerber’s son – and his friends are desperate to be just like their parents, fighting fires and saving lives, each 11-minute episode lends the Firebuds the chance to come to the rescue in small but important ways. Whether it’s freeing a young car that’s stuck in a tree, tracking down lost puppies, or helping their neighbors stock up on supplies during a blackout, every mission teaches the Firebuds what it truly means to be a hero. “Emergency response, volunteerism, helping others, those are the core themes of Firebuds,” explains Gerber. “First responders have always been around. And yet, in the past 20 years, there's been a greater focus on just how much sacrifice they make in order to do their jobs. You saw it in COVID, with nurses and doctors and EMTs in the medical community. You saw it after 9/11 with the fire department and police officers.”

He continues. “There have been first responders in my family. My grandfather was a police detective in New York City back in the 60s. I felt like it would be great to honor the first responders by making a show that really portrays what they go through and what their families go through.”

When it comes to animation, there have been a myriad of kids’ series based around humanizing transportation, from Thomas the Tank Engine and Jay Jay the Jet Plane to Chuggington, Trash Truck, Transformers and many others. But what sets Gerber’s series apart is that, in the world of Firebuds, vehicles and humans are equal citizens.

“One of the things that's really important to me, whenever I come up with a show idea, is that it's providing something that we haven't quite seen before,” says Gerber. “In Firebuds, creating a world where people and vehicles were equal citizens was that unique thing. The world is built for vehicles to go everywhere. There aren't really any garages. The garage doors open up to living rooms. And the vehicles live in the house with the humans. Every restaurant is a drive-through. Literally, they drive through the restaurant. And there are ramps everywhere in this world.” The sheer scale of Firebuds, Gerber says, was the biggest challenge in creating the series.

“All these sets had to be built big enough for huge fire trucks and small children to be in together, and they all had to be accessible,” says Gerber. “We constantly reminded designers of things like, ‘Wait, no, you don't just put a human door in this store. You need a garage door so cars can get in there.’ And any object they interact with has to be small enough to make sense for the human and big enough for the vehicle to interact with it. So, everything we look at, we have to look at it through two lenses and find a compromise between those two scales.”

All the cars and trucks in Firebuds are designed with robotic arms and hands, in addition to having windshields with full eyes and windshield wipers for eyebrows, so that the vehicles could have all the same range of expression as their human friends and co-workers. And, to help with camera angle scale, Gerber did borrow a concept from his princess show production days.

“I wanted it to feel like the relationship a kid would have with a horse,” he explains. “So, they're riding horses, but it's a vehicle and we wanted to see their faces together when they’re out and about. That concept came very early on in my development process.” But along with wanting to stand-out from the transportation television crowd, Gerber was also aware that his Disney car characters had to stand alongside other famously popular animated characters, like those in Cars.

“Because these are Disney characters, there's a high bar for how these characters are animated and depicted,” says Gerber. “So, it was very important that they look reflective and shiny. Artistically, in CG, you have the ability to make these vehicles look like real vehicles with the reflectivity and that chrome and all the bells and whistles. But it was also important that they feel organic. We do a lot of squash-and-stretch. We don't adhere to the realities of physics, and we bend their bodies every which way.”

He adds, “We also thought about the color palette, making it bright and appealing, but not obvious. We didn’t want to use the eight-crayon Crayola box, we wanted the 64 pack.”

The wide range of car colors is complimented by the show’s widely ranging community culture, with individuals of various ethnicities, religions, and family dynamics represented.

“Bo’s father is Filipino, his mom is Jewish, and he celebrates both Christian and Jewish holidays,” says Gerber, who was intentional about including Filipino writers and crewmembers in every production department. “We’ve got a Black family in the show, a girl who is part Japanese and part Filipino and is adopted by a Cuban American mom and a Caucasian mom. One of the things that I love about animation for children and families is that you can hold up a mirror to the world that we live in. It's been important to me on all the shows I've done, and I really wanted to make it a central facet of Firebuds.” But the overarching theme of the series is about the spirit of community, volunteerism and thinking about others before yourself, concepts everyone can relate to, whether or not they or their family saves lives for a living. The idea behind Gerber’s show is that anyone has the chance to change a life every day, even if that act may seem small in comparison to those of our heroes.

“Even though it's a fantastic world, we wanted to keep the Firebuds’ journey somewhat grounded,” says Gerber. “They’re kids whose parents are their heroes. These kids want to be first responders like their parents, but they're not quite ready for Prime Time yet. So, over the course of the series, we see them do bigger and bigger things. A couple episodes in, they fight their first fire. It’s a small fire on a playground structure, but they do greater things as the episodes go on and then the mayor recognizes them. The stories go on to them becoming the heroes they want to be.”