The studio’s innovative program is back on Disney+ with five new animated films from five first-time directors, expertly guided from pitch to post by production manager Jennifer Newfield. 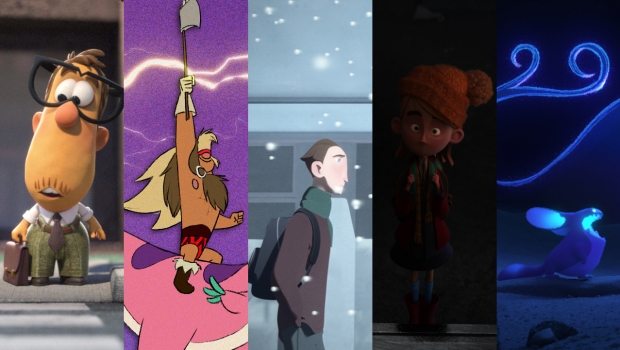 Short Circuit, Walt Disney Animation Studios’ innovative, experimental short film program, is back for Season 2 with five new films debuting today, August 4, on Disney+. The unique program, where anyone at the studio can pitch an idea and possibly direct their own short, began five years ago; the first group of 14 films premiered on the streamer in January 2020. The latest crop, created by a group of filmmakers hailing from various departments throughout Disney Animation, explores five unique visual and storytelling styles.

The Short Circuit program lets filmmakers take risks in both visual style and story, incubating new voices at Disney Animation along with new technical innovations in the filmmaking process. Working with a team of fellow artists moving on and off major studio projects, each director has a set time and budget to create their personal film. The goals are aggressive, the results, compelling in diversity of design and story.

The five shorts featured in this season of Short Circuit are:

A law-abiding citizen must find his inner strength to cross the street at a light that won’t change. Battling evil is all in a day’s work for Dinosaur Barbarian, but what about taking out the trash? Sometimes even a superhero needs to clean up his act.

A story about growing up and the meaning of home in which a young adult repeatedly visits his hometown, but with every new arrival starts to face the inevitable: change. No. 2 to Kettering, directed by Liza Rhea

On a dreary, ordinary morning, a girl learns how the power of laughter can lift even the most sullen among her fellow bus riders along their journey to Kettering. Songs to Sing in the Dark, directed by Riannon Delanoy

Two creatures living in the depths of a dark cave engage in a battle of acoustic one-upmanship. As things escalate, they come to realize that they are stronger together.

Take a quick look at the Season 2 trailer:

Overseeing Season 2 is production manager Jennifer Newfield, who worked closely with the filmmakers in every aspect of their participation, from helping them perfect pitches, to overseeing various phases of pre- and post-production. The Disney veteran is no stranger to the program, having served in a similar role on many of the previous Short Circuit films working alongside then-production manager Nicholas Russell. “My job is to curate the program,” she says. “From soup to nuts. From when people submit, all the way through post, I oversee all the shorts, including putting together the teams required bring the directors’ visions to the screen.”

Short film pitches are reviewed by a selection group comprised of as many as 10 filmmakers and creative development artists from Disney Animation. According to Newfield. “This group can also include technical and visual effects supervisors, and previous Short Circuit directors. Their top priority in selecting a pitch is the storytelling aspects. They’re looking for a good story that works within a (roughly) 90-second timeframe, something new and interesting, and something that we haven’t explored before at the Studio.”

For selected pitches, Newfield quickly matches the director with a Short Circuit advisor. “People step forward to express interest in each project, which is wonderful,” she explains. “We go around to the various departments doing roadshows and letting everyone know what the shorts are about. Then we ask if anyone would like to participate as an advisor, a guide, and/or a mentor within their department.”

Sitting in the director’s chair for the first time is one of the most unique, and challenging aspects of the program, for both the filmmakers as well as Newfield. “First time directors have different perspectives because they're usually coming from one discipline and don't usually have a broader view of the studio’s whole production pipeline,” she describes. “So, it's my job to make sure they feel supported in their blind spots. It's my job to make sure they feel like their creative vision is going to be represented on screen. I really try to focus on how I can best support them, get inside their heads as much as possible to know the story they’re trying to tell and how they’re trying to tell it, because they may not have all the tools in place to do so. So, I try to fill in all the blanks as best as I can.”

Suffice to say, the Short Circuit films are produced with simpler, more streamlined processes and pipelines quite different from those the studio normally employs on its productions. That means everyone involved must quickly recognize and adapt to new and different production realities; it also means learning new jobs as well as embracing new ways to perform familiar jobs. “What we normally do at the studio is pretty different from the way that Short Circuit runs,” Newfield shares. “Part of the introductory education for everyone who enters into the program is agreeing that we're going to do something different both visually, stylistically, and workflow-wise. For me, that means keeping on my toes every single day, always asking, ‘How can we accomplish what you're trying to build in a condensed period of time, and a condensed screen run time?’ It means asking artists to consider, ‘How can I best roll back into my skill set, think about all my pipeline experience, and try my hardest to support the directors in the way that their specific shorts need?’"

Part of that “new way” of producing often involves jumping from the studio’s enormous 3DCG world into 2D. Of the five new Season 2 shorts, three involve varying degrees of 2D animation. “Our pipelines are extremely flexible,” Newfield notes. “And I fortunately have a background of working on 2D features. So, I know what it takes and the resources we need. I actually made our Dinosaur Barbarian pipeline based on that previous knowledge, then vetting it through people, like a visual effects supervisor, to make sure it was accurate. So, for 2D, we quickly had all the pieces we needed in place. That’s the type thing we do in Short Circuit.”

Newfield’s production management background also gives her the insight and perspective to help successfully guide the directors as they deal with the always expected, but nevertheless challenging aspects of producing their film. “Some of the biggest directorial concerns are often fleeting,” she shares. “Sometimes it's at one particular moment where everything feels like it's the most important moment in the film. Helping manage director and artist expectations in that way is one of the biggest challenges of my job. When you're a new director and you don't know what's what, the kind of decisions coming at you feel like right then, that decision is the most important decision that will affect your film. So, I help give them a greater understanding of what are the biggest moments in the film that they can influence, and when they should save those huge notes and huge changes, or larger conversations, because you really want to have them at those points, not where we're at now.”

“For me, I'm always trying to give as much context and explanation as possible because ultimately, they need to know where to place their biggest efforts and on what to throw their weight behind the most,” she continues. “Because when you have limited resources, it's just the reality that you're just going to have to make some hard decisions along the way. I try my best to educate them on where those moments are going to be most important and where their influence is going to best show up on screen.”

Newfield acknowledges that “shorts are hard to make, especially when you're at a studio that makes features that have big moments and huge story arcs,” always reminding filmmakers that “we have limited resources, and that there's no cavalry coming over the hill to save the production.”

“To condense everything into a tiny short sometimes feels wrong for the directors,” she adds. “It often feels like you need more breathing room and time, and I don't disagree. But you could very easily not get all you want on screen just because your film is creeping longer and longer.”

That reality, the need to continually assess resources and best outcomes, begins with how pitches are first assessed. “Even in the selection of our ideas, we try to hedge on what we can produce, sometimes making notes on the pitches saying, ‘Listen, this is a great idea. Your theme is amazing, but there's too much packed into here for us to make it in Short Circuit. Can you think of creative ways to accomplish the same thing, but condense it down or scale it back a bit?’”

Newfield also notes that regardless of the daily challenges finding enough time and resources to get films produced, the fast-moving, highly focused, small team approach is what makes Short Circuit successful and meaningful for those lucky enough to participate. “On big features, when you have 200 plus people working on something, you can't gather them all in a room and agree on how you're going to do something,” she says. “But in Short Circuit, you can bring the whole team together in one place and walk through how to solve a particular problem or hiccup you face along the way. Do we have the skillset in this room to handle this? One really special thing about this program is that it's a close, lean unit. A lot of people in a large studio enjoy that small team experience, because we can agree on something and then no one feels like they're having work dumped in their lap. We've all pulled together to make a decision together on how to make something work.”