Disney Television Turns Scares into Laughs in ‘Monsters at Work’ 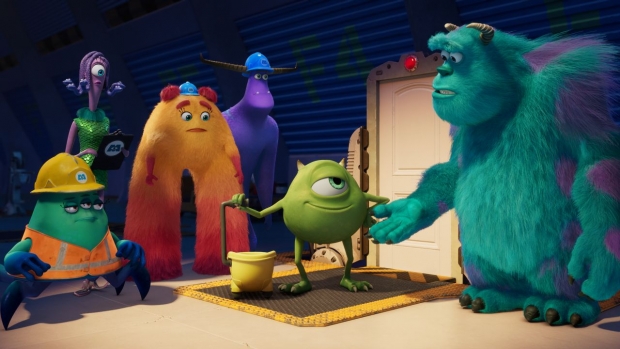 The answer to your first question is “Yes.” Mike Wazowski and James P. "Sulley" Sullivan will again be voiced by actors Billy Crystal and John Goodman.

As to your second question, the show takes place the day after the Monsters, Incorporated power plant started harvesting the laughter of children to fuel the city of Monstropolis, thanks to Mike and Sulley's discovery that laughter generates 10 times more energy than screams. The series follows the story of Tylor Tuskmon, an eager young monster who graduated top of his class at Monsters University and always dreamed of becoming a Scarer until he lands a job at Monsters, Incorporated, and discovers that scaring is out, and laughter is in. After Tylor is temporarily reassigned to the Monsters, Inc. Facilities Team (MIFT), he must work alongside a misfit bunch of mechanics while setting his sights on becoming a Jokester.

And the answer to your third question is other than providing guidance, creative consulting, and access to visual assets from the film projects, Pixar was not involved in the new series; they basically said, “Have fun!” with Gannaway and Disney Television taking it from there. Bonnie Hunt reprises her role as Ms. Flint, who was formerly in charge of training new Scarers at Monsters, Inc., but will now manage the department responsible for recruiting and training the funniest monsters to become Jokesters. In addition to Crystal, Goodman, and Hunt, returning cast members from the original movies include John Ratzenberger as Yeti and Tylor's dad, Bernard; Jennifer Tilly as Celia Mae; and Bob Peterson as Roze, twin sister to his original Monsters, Inc. character, Roz.

The show is produced by Disney Television Animation, though it’s based on a Pixar property. It’s the first series based on a Pixar property where Pixar wasn’t directly involved in the production. Project development began with Gannaway reaching out to Pixar creative leaders Pete Docter and Peterson. “They were very supportive of the show,” he explains. “But they were also very much like ‘Go out and create new characters and have fun.’ So, it wasn't by any means any kind of policing situation. It was go have fun in the world with your new characters.” “We had discussions about the show, and they shared with us a lot of the development art from the movies, so that we could sort of dig in and look for things they didn't use that might inspire us,” he continues. “Like the MIFT cart. The cart the group drives is actually a design developed for the original film. And also, along the way, Bob Peterson and Kelsey Mann were reading scripts and consulting on the show. We had a nice casual interaction with them during production.”

Taking Pixar’s Oscar-winning, fan favorite world into episodic meant finding new stories and characters audiences would enjoy while still feeling like they were in familiar Monsters, Inc. territory. “It was super important to make sure the world looked and felt like the films, that you were going back to a place you love,” Gannaway shares. “And not only that but getting Billy Crystal and John Goodman back [as Mike and Sulley]. If I'm saying, ‘Hey, come spend time in a place you love with friends you love,’ it better darn look like the place you loved and those better be your friends. It’s only at that point I can take you to new places and introduce you to new people that I hope you fall in love with. Because if it’s not, you'll sniff it out right away.”

Gannaway and his team spent considerable time developing the new storyline about a young monster who graduates school as a top scarer, only to find his world turned upside down when laughs, not scares, become Monstropolis’ new power source. “Tylor goes to the School of Scaring because he admired Sulley and wanted to be a scarer,” he says. “And then, the universe throws him a curve ball; they've switched from scare to laugh power. How does that character navigate that change? Great stories often come about when there's great change in the world. But it took us a long time just to get to that simple idea. It's hard to tell you where the idea came from other than banging our heads against the wall for a long time, trying to figure it out. We explored characters, saying, ‘Well, what would be the worst possible situation to have this character in, and what would they do?’ And it eventually came together over time.” Gannaway goes on to explain that unlike previous feature film to series adaptations he’s produced, like Lilo & Stitch: The Series, or Timon & Pumbaa, Monsters at Work isn’t really a spin-off in the traditional sense. “This was a particularly unique situation for me, in that we didn’t want to focus the show on the Monsters Inc. characters,” he says. “We wanted to focus the show mostly on this new MIFT crew of Tylor, Duncan, Fritz, and Val, and let the Monsters Inc. characters serve as the supporting cast. It's not a spin-off. Timon & Pumbaa was almost a spinoff of The Lion King. And it’s not Dalmatians or Lilo & Stitch in the sense that I'm just spending time only with those same characters. So that made this show definitely different for me.”

He also notes that regardless of the show’s direction or character ensemble, it had to be enjoyable. “I've got one foot in adulthood and one foot as a 12-year-old,” he says. “I kind of balance those two. I have to get the show on the air, right? So that's the sort of pragmatic part. But it’s gotta be fun! I always tell our crew, ‘We're not late for the ending.’ We want to spend time with our characters. We're not trying to hurry to the end. We have to have fun.”

“What's great about doing this as a Disney+ series is that with shows like The Mandalorian, they’ve proven you create a series that can successfully live in a familiar theatrical world,” he adds. “That allows us to spend more time with these new characters and develop them over the 10 episodes.”

“Ultimately,” he concludes, “I hope audiences experience heart and humor, that they feel like they've returned to Monsters, Inc. and spent time with old friends and met new ones along the way.”