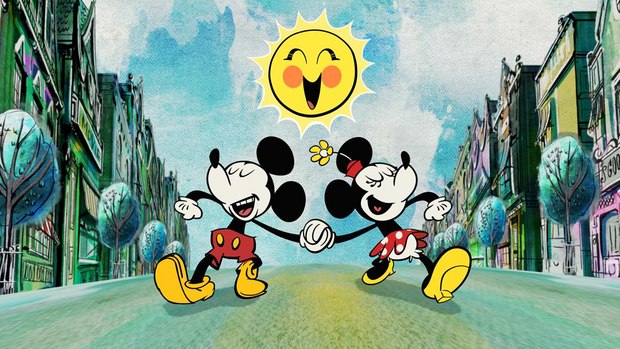 The first season of Mickey Mouse, which kicked off in 2013 with the delightful “Croissant de Triomphe,” and went on to win three Primetime Emmy awards and three Annie awards. Season two brought two more Primetime Emmys, and a whopping six Annie awards. Ahead of the third season premiere, AWN spoke to Rudish about his work on Mickey Mouse, which includes brainstorming story ideas for the iconic characters for shepherding through Disney Television Animation’s storyboarding and production process. Read the Q&A, below:

Paul Rudish: There will be 18 finished shorts and we’re a little better than halfway through our production at this point. They’re stacking up and waiting to be aired.

DS: How many different directors have a hand in the productions?

PR: We have three full-time directors -- Dave Wasson, Alonso Ramirez and Clay Morrow are working on season three and we have various freelance people that have come in and picked up a couple of episodes along the way. DS: 18 shorts means quite a bit of animation, let alone story development. Tell me a little bit about the creative process. Are there any common narrative or visual design themes? How are the shorts written and storyboarded?

PR: At the head of the season we’ll have a big story meeting with all of the directors and our head writer, Darrick Bachman, and some other funny fellows that are friends of ours. We’ll just start throwing out possible ideas. We feel pretty comfortable with the characters. We always did actually, even back in season one. The characters are so iconic and well established that their personalities are pretty clear. At this point we’re thinking, “What situations should we throw these fools into next?” We’re just throwing out ideas, spit balling things around a brainstorming session until we’ve got a good couple of kernels of situations that seems like they have the potential to be funny.

Then we’ll attack each of those singularly and try to work them out and see how much mileage we can get out of them, see if they actually turn into a real story. Then we’ll take everybody’s thoughts and write up a basic outline of the structure of the story. Then it goes to storyboard and at that point the storyboard guy, who’s generally one of the directors, will just start playing with it, trying to find a lot of the jokes visually. We don’t want to overwrite it.

Mickey Mouse didn’t rely on a lot of verbal humor. There’s a lot of physical, slapstick stuff. So, we want to leave room for the storyboard artist to find that humor along the way. It’s a process. The writer, Darrick, will also work alongside the storyboarder. We’ll check in and brainstorm more ideas as things come up -- “Oh, that gives me an idea for this.” It’s pretty collaborative. Darrick will also follow along and if we feel like we need some particular writing, or some particular dialog to help out, he’ll track that.

Next, we think about the flavor, the setting, the mood and the tone of each particular short. We’ll talk to Joseph Holt, our art director, and come up with an art direction style that seems to help enhance whatever the mood of the story is.

We have different kind of styles that we’ve approached in the background treatments. We’ll talk about, “This one should be nice and clean and bright,” or “This one should be dirty and gritty and maybe we should use a more loose line style here,” or “Maybe we should do a more graphic, Mary Blair kind of style for this one.” All through the process we look to see what elements we can add that are going to help enhance that particular story. DS: So you’re basically free to explore what’s unique about any given setting…

PR: We’re not locked into always having things look a certain way, like they always live in this town. Each of the stories is a reset. He’s in different countries. He’s all over the place. We don’t have to return to the same suburbs and go to Mickey’s designated house each time. It gives us the freedom to explore different terrains and locations and styles. I think that’s really fun.

DS: How do you pace getting 18 shorts done over the course of a season? How is production scheduled?

PR: They’re all staggered on the calendar. We’ll crack the story on the first one. It goes to storyboard. While that’s in storyboard we’ll work on the story for the second one. When the third one goes to storyboard the second one is moved into design and then on up through animation, then sound design, then post. They’re all just staggered, so we are working on multiple episodes at the same time, just all in different stages. DS: There’s no more iconic character in the entire Disney universe, and possibly the actual universe, than Mickey Mouse. On one hand, you could do a great job with these shorts, people would enjoy them, they’d get good ratings, etc. Great job, Paul. But if something goes wrong, the downside of producing something that isn’t perceived positively could be significantly greater than the best upside. What kind of creative parameters or boundaries are you given and allowed to work with?

PR: There are some wants from on high as far as boundaries set, trying to make sure that everything feels contemporary and of our time. There was not a lot of interest in having us do period pieces. Mickey often did that in the old days, where he would be in the wild west, or in medieval times. They really wanted to make sure that it felt contemporary for today’s people to relate to.

That was really one of the few parameters put on us. Then as far as self-imposed ones it’s chiefly just looking for funny and looking for fun. Looking back at the playbook that Walt and Ub Iwerks setup for Mickey in the late 20s and the early 30s it was all just surreal -- there weren’t really any rules. Like I was saying, he would go all over the world in different times and all kinds of different settings. Just following that gave us a lot of creative freedom to try lots of different things. We’re just trying to flex that and keep it fresh, looking for what’s going to be the funniest stuff we can do here that still is okay with Standards and Practices. DS: Are there any common themes that you’re trying to embrace, from a narrative or visual standpoint? Do they all use pretty much the same type of animation, character design and visual design? How much are they similar and how much are they dissimilar?

PR: The animation style and the character designs are pretty consistent. The backgrounds tend to change more. The characters may have costume changes, but they’re consistent. The main thing is their personalities, not having them role-play a different personality than themselves. Even if Mickey lives in Paris in one episode and speaks French and then is somewhere in Burbank, speaking English, it doesn’t matter as long as he’s got the same personality. Like I said, they’re really strong personalities, so that’s what keeps it consistent and familiar to the audiences.

These are the cast of players that we know and love. We can throw them in any kind of situation or location and then have our familiar characters explore a new situation or a new set piece.

DS: Obviously there are cultural and narrative sensibilities that are important to keep in mind with regards to different country settings. How do you ensure that the shorts are culturally relevant and will be entertaining to audiences in the various markets you’re targeting?

PR: We try to do research. We try to pull from things we know if we’ve ever been to these places, though most times, we haven’t. We really try to make it feel like a short is set there [a given country]. Then we will submit our storyboards and animatics to the regional Disney offices around the world that handle various territories. Disney has an office in every country. We’ll submit to them and get their feedback and they can tell us, “This is actually a no-no in our country. We shouldn’t do this.” They can help us with the dialog and the translations. We’ll get them approved by the various countries and make changes accordingly if we’ve gone way off the mark and we’re just completely misrepresenting things. But for the most part we’ve done pretty well, because we just keep the shorts pretty iconic.

Then whenever possible we really try to pull in people that can help us out. We always have a voice coach that coaches our actors in the right dialects and helps them with pronunciation. Our music composer is incredible and he just goes to town researching different musical styles whenever we dump one of those on his lap. The Indian episode [from a previous season] was great because he was excited to do various Indian styles -- like the Bollywood dance number -- and he sought out Indian musicians so we could get the right instruments. He worked with one of the singers that sang some of the songs, who also helped him write the lyrics and translate them into Hindi. We try to give it as much attention as we can in our crammed schedules. DS: I saw that Mickey in India short during a presentation at the Ottawa Animation Festival and the piece was really impressive. For someone in animation this just seems like a really, really great spot to be, making a slew of new Mickey Mouse shorts set all over the world.

PR: The timing is just right and we have a lot of nice freedom from Disney to play. We’ve got a great team of people. We’ve got some really creative folks who’ve come together on this project. And, I have to say, all that along with the reverence we have for Mickey Mouse historically, and then to be allowed to play with him…yes. I have to admit, it is really a treat.