‘Mickey's Tale of Two Witches,’ premiering today on Disney Junior and tomorrow on Disney+, and ‘Mickey and Minnie Wish Upon a Christmas,’ coming later this year, continue the company’s tradition of fun, festive, and heartwarming animated holiday offerings. 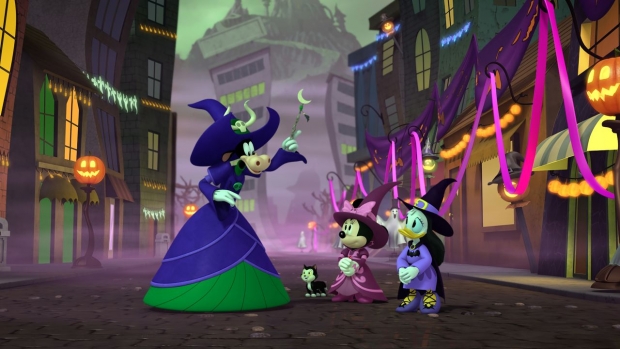 Even today, audiences have come to expect, and look forward to, their traditional Disney holiday movie nights, featuring popcorn, sweet treats, and the fun, festive, animated hijinks of Mickey and the gang. But this year, to counter the ongoing stress of the pandemic and social isolation, Disney Junior, and Disney+ are slaking audiences’ thirst for animated holiday tonic with not one but two all-new Mickey films: Mickey's Tale of Two Witches and Mickey and Minnie Wish Upon a Christmas.

Mickey's Tale of Two Witches, an hour-long Halloween feature special, premieres today, October 7, on Disney Junior and tomorrow on Disney+. In Mickey's Tale of Two Witches, everyone’s favorite Disney mouse narrates a story about two witches-in-training - Minnie the Wonderful and Daisy Doozy - who must pass four tests to graduate from the Witch Academy in Happy Haunt Hills. The two end up joining forces, along with Count Mickula, to defeat a mischievous ghost.

Mickey and Minnie Wish Upon a Christmas - where Mickey, Minnie, and friends are separated from each other all over the world, trying to get back to Hot Dog Hills by Christmas Eve, despite great obstacles - will debut later this year. Executive producing both films are 28-year Disney Television Animation veteran Rob LaDuca and Mark Seidenberg, who have worked on some of Disney Junior's most beloved series such as Mickey Mouse Clubhouse and Jake and the Never Land Pirates. We recently spoke with LaDuca and Seidenberg about how both films represent the core values of the holiday season, the timeless connection audiences have with Mickey and the gang, and their own belief in the unique power of Disney’s kid television programming.

Victoria Davis: Having both worked in the Disney Junior world for quite a while, and having worked on more than one Mickey-focused series, how do you think Disney’s elementary and preschool age programs have uniquely served child-age viewers compared to other television platforms? Rob LaDuca and Mark Seidenberg: What makes Disney Junior's series and programs so unique is that our characters have a personal relationship with our audience. Our characters embody the universal themes of friendship, family, loyalty, optimism and love, and each show, in its own signature way, communicates these themes to their fullest extent.

On the Mickey shows we've worked on, we’ve had an advantage. To most kids, Mickey was already recognizable and trusted. Many Disney characters have this familiarity with kids. That, combined with the guidance from Disney Junior's educational group and creative executives, creates a winning team.

VD: Where did the idea come for these two new musical films?

RL and MS: Halloween and Christmas have always been loved by kids across the nation and in many parts of the world, so we jumped at the chance to work in a longer format than our usual eleven-minute episode to create these musical films. Given the longer time meant that we could add more humor, songs and especially emotional highs and lows, as well as add a more cinematic quality. This year we wanted to play out much bigger stories that highlight the emotion, heart and friendship of Mickey and his friends.

VD: Tell me about the animation - what were your main design goals?

RL and MS: To keep these films relatable to our Disney Junior audience, we've made them in the same 3D/CG style as Mickey Mouse Clubhouse and Mickey Mouse Mixed-Up Adventures. But since we had a longer format and more dramatic stories, we focused more on acting, expression, and production values. Deepening shadows, enhancing color and more cinematic camera play. Our goals are always focused on keeping the audience involved in the story, caring for the characters, and keeping the whole family entertained. VD: Disney is famous for inserting other movie or character references into their films. Are there any festive inspirations you drew from or Easter eggs you inserted into these stories?

RL and MS: Inspiration comes from so many great Disney animated and live-action holiday movies. Everything from Lonesome Ghosts and Hocus Pocus to The Nightmare Before Christmas. And maybe you'll even spot an homage to The Haunted Mansion.

VD: What are some scenes and messages you’re most looking forward to introducing to kids though both these stories?

RL and MS: In Mickey’s Tale of Two Witches, Minnie the Wonderful and Daisy Doozy learn that working together makes their magic and their friendship stronger. The sequence in which Minnie and Daisy team up to defeat a mischievous ghost who threatens to ruin Halloween wonderfully expresses this powerful theme.

In Mickey and Minnie Wish Upon A Christmas, the scenes where Mickey and Minnie each wish upon the Christmas Wishing Star to bring them and all their friends together on Christmas are extremely powerful, and they perfectly express the universal message that the love of family and friends is the most important gift of all. VD: Were there any challenges with production? Or fun new experiences?

RL and MS: Recording the actors was the biggest challenge. Instead of recording in a professional studio, the actors - like the writers, artists, directors, and editors - had to work remotely from home. Not everyone had the best set-ups, and it took a while to work out the “bugs.” One actor actually had to re-record their whole performance a year later, re-doing almost one hundred lines! Although editing the footage took a bit longer than usual, we spent extra time making sure that the film ended up looking fantastic.

The fun new experience for us was celebrating Halloween and Christmas for the past two years as we developed and produced these two soon-to-be classic movies!

VD: Mickey Mouse and his gang have been around for decades and remain timeless characters, one reason being the relatable and supportive family dynamic among Mickey and his friends. How do both these films embrace and capture that timeless feel and family aspect that people have been drawn toward since the conception of these characters?

RL and MS: Both movies embody universal themes that everyone around the world can relate to -- friendship, family, optimism, loyalty, and the love we feel for each other. As everybody’s best friends throughout the years, Mickey and his pals are the best messengers of these timeless messages for today’s world.