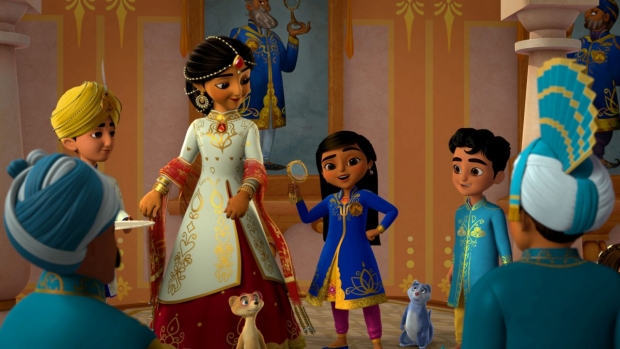 With a Season 2 order already in hand, Disney Junior’s new animated series, Mira, Royal Detective, premieres tomorrow, March 20, on the Disney Channel and Disney Junior in the U.S., and Sunday, March 22 on Disney Channel India in India. Created for kids age 2-7 and their families, the mystery-adventure tells the story of Mira, a brave and resourceful young commoner who is appointed to the role of royal detective by the queen. The series centers on the young sleuth, who along with her friend Prince Neel, creative cousin Priya, and comical mongoose sidekicks Mikku and Chikku, set out on mystery-solving adventures that highlight critical thinking and encourage deductive reasoning for young viewers. Each episode features two 11-minute stories that celebrate the cultures and customs of India by incorporating authentic food, fashion, language, and art. Music and dance, so important to Indian culture, play an integral role in the show; each episode features at least one original song and dance number that showcases India’s extensive cultural diversity.

Disney had been developing the show for a number of years before finally giving the greenlight; production was formally announced back in November 2018. “I was finishing up the last season of my series, Miles from Tomorrowland, when Mira was given the greenlight to series, and they asked me if I would come aboard as the showrunner,” Paladino explains. “I had been to India in the past and love the challenge of doing a deep dive into a culture that is not my own.  The concept of the show was intriguing, and I was excited about the chance to explore South Asian culture in a series for kids.  It was an honor to be asked, and a no-brainer to say yes.”

As a show rooted in celebrating Indian culture in a way that appeals to Western preschoolers and their families, Mira has always faced a set of unique conceptual challenges. How do you approach Indian character and story development in a way that resonates outside that country? How do you illustrate culture and customs in an authentic, not exploitative manner? “From the beginning, it was extremely important to us to make sure that South Asian voices were represented on the show,” Paladino says. “We work with Indian writers, visual artists, musicians, dancers, and more.  Once I understand what elements are important to a story, I can help shape them into an effective episode, and amplify the voices that need to be heard along the way. As a storyteller, I know what works in terms of our young audience, so by collaborating with Indian artists, together we can create something that feels authentic and will connect with kids”

According to Gerassimova, that also means paying close attention to important details unique to life in India. “We do a lot of research and pay close attention to the intricate details and characteristics of Indian art, architecture, fabric and jewelry design,” she describes. “We go to great lengths to make sure all aspects of design on the show are authentic and appropriately used. With the help of our cultural consultant, we look at every textile pattern, sari draping style, shoe design, jewelry, and hair style to make sure all of it accurately represents the background of our characters. We also carefully consider the architectural characteristics of our buildings, and add details to make them feel true and authentic – such as showing objects on the rooftops of buildings to demonstrate they are being used as a place of housework or play, as they indeed are in India. Our intention is to introduce Indian traditions, culture, and customs in the most respectful and loving way.” Anyone who has traveled to India, or studied the country to any degree, can’t help but marvel at the incredible diversity of its people, the bustle of everyday life filled with an incredible mix of colors, textures, sights and sounds; you couldn’t ask for a richer palette from which to design a show. For the first season, the show’s creators looked mostly to Northern Indian art and architecture; as the stories evolved, they introduced characters and stories from other parts of India, making sure to carefully research those areas so the visual representation remains accurate and authentic.

“There is such a wealth of beautiful reference everywhere in Indian culture!” exclaims Gerassimova, who’s goal was to create a unique visual style. “It’s easy to find gorgeous buildings with exquisite archways, doors, and painted elements; the fabrics and jewelry are stunningly intricate, and the colors so rich and vibrant. I wanted to stylize the look of the show to bring in a sense of playfulness, since it’s a show for a young audience. I seek out ways to incorporate iconic Indian visual themes in not only the obvious ways, but in more untraditional ways. For example, the clouds, grass, and water in our world feature authentic Indian patterns. I feel that this infuses the atmosphere of Jalpur with the spirit of India in a more subtle way, and visually sets the show apart.”

The show is animated by Technicolor India, part of Technicolor’s international family of creative studios that includes MPC, The Mill, Mikros, and Mr. X. “Since our show is inspired by Indian culture, it’s fantastic to have 170 people at Technicolor India working with us,” Paladino says.  “They share their thoughts, expertise, and creative comments.  Recently, some other members of the creative team and I went to India to work with our animators, and we saw how meaningful this series is to them.  They are representing their culture to the world [the series will ultimately air in 160 countries] and they take that responsibility seriously, as do we.  We love the partnership that we have developed, and hope that this comes through when you watch the show.” For Paladino, a TV animation veteran, producing quality children’s television is a mix of art and science; you want to tell creative and imaginative stories, but at the same time, need to consider the hard data about what works for kids in terms of appeal and comprehension. “I don’t think there are any secrets to this process, except for the years I’ve spent working on various shows, writing countless scripts, learning from people who came before me, reading research about how kids take in media, and good old-fashioned trial and error,” he notes.

On Mira, in addition to staying culturally authentic, you have the obvious challenge every preschool series faces: you must continually grab and hold the attention of a very young audience. That dynamic is not lost on Paladino, who admits, “Creatively, it’s challenging to find the right balance for our mysteries – we want them to be simple enough for our young audience to follow, but not so simple that kids tune out.” He adds that the biggest production challenge is juggling the show’s many pieces. “It's like putting together a huge and complex puzzle.  But when those pieces snap together and a completed episode comes into focus, it’s all worth it.”

Ever the artist, Gerassimova reveals the delight she feels when embracing, and meeting, the show’s production challenges. “In order to stay true to Indian art traditions, we have to have a lot of detail, which is a wonderful thing for an artist. But we also must condense and simplify it to make sure the show is producible. The biggest challenge is also the biggest joy – it’s the level of detail. We want our show to entertain, to promote a love of Indian culture and curiosity to explore other cultures. There is so much we can all learn from each other!” Paladino shares the sentiment. “I believe that stories have the power to connect people, and that’s my ultimate goal for Mira,” he states.  “I hope that viewers of South Asian descent see themselves in our show, and at the same time, I hope that non-South Asian viewers are inspired to further explore the beauty of the culture.  While we make sure that the cultural elements are very specific, we also make sure that the stories, characters, and emotions are universal.  Everyone can enjoy a good mystery, no matter where you’re from.”