Disney Artists Share Their Stories and Creative Secrets in ‘Sketchbook’

In the new six-part series premiering today on Disney+, artists who’ve helped bring some of Disney’s most iconic animated characters to the screen, such as the Genie in ‘Aladdin’ and Young Simba in ‘The Lion King,’ offer an in-depth look at how the ‘magic is drawn one line at a time.’ 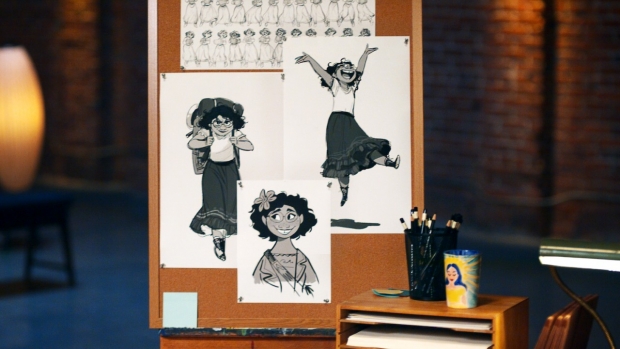 If you’ve ever wondered exactly how a Disney character makes the journey from nascent idea to a fully realized creation, the all-new instructional documentary series Sketchbook, premiering today on Disney+, was clearly made with you in mind. Produced by Walt Disney Animation Studios and Supper Club (creators of Chef’s Table), and directed by Leanne Dare, Andrew McAllister, and Jason Sterman (who also serves as an executive producer), the six-part series takes us onto the desks and into the lives of talented artists and animators as they teach us how to draw a single iconic character from a Walt Disney Animation Studios film.

Each episode focuses on an individual artist illustrating a character that they either helped create or that inspired them to want to be an animator at the studio. The participating artists are Gabby Capili (Kuzco, The Emperor’s New Groove), Eric Goldberg (Genie, Aladdin), Mark Henn (Young Simba, The Lion King), Hyun Min Lee (Olaf, Frozen), Jin Kim (Captain Hook, Peter Pan) and Samantha Vilfort (Mirabel Madrigal, Encanto). As they demonstrate the steps to drawing these characters, the six also share their stories of how they made their way to Disney and their chosen character.

In a recent roundtable discussion attended by AWN, the artists talked about their creative processes, the evolution of character design, and the particular experience of working for a company that is itself an iconic entity. Eric Goldberg: I think the two of them feed off of each other. It's one thing to come up with the character design, but until you know who that character is, and in particular who the voice artist might be, you can’t really know how that character moves and reacts and performs. So it's a bit of both really – you can't design in a vacuum, you have to have a good idea of who that character is and that character's place in the story.

Hyun Min Lee: I feel like it's a similar thing with animation and design. They also feed off each other – the way a character is designed will definitely make us animate it a certain way. But as we are finding the character and doing test animations early in production, sometimes the animation will lead to design adjustments. Question: With technology evolving so much, how different is it to design a character today versus a few years ago? And which one do you prefer?

MH: That's a good question. I would begin by saying that, if you're comparing hand-drawn to computer animation, both of them start with a drawing. Both of them start with a blank piece of paper and somebody's idea for a story, and then there are characters, and it kind of builds from there. At a certain point, the paths split. Development of a CG character is a different path, but it’s still basically about refining the design and doing test animation and exploring, laying it against the voice. There's a lot more involved with the CG rig, building the model, rigging it, and so on, which you don't have in 2D, but both of them start with that drawing and somebody's idea of what the character looks like.

EG: CG has the luxury of having more complex design. You can actually put more texture in the clothing, more detail, things like that. And to put that same amount into hand-drawn is kind of counterproductive, since you have to make so many drawings of the character to animate it. So I would say, generally, hand-drawn is simpler, and CG tends to be pushed a little more towards realism, because you can. But, as Mark said, it all starts with the drawing.

Jin Kim: To answer your second question, I prefer drawing design. For me, it has warmth in it. It's a kind of handmade quality. HML: I think, with CG, there are still a lot of technical restrictions that constrain the design. For instance, when they're rigging the character, they need to be completely symmetrical and things like that. So I think CG is definitely still in its early days, and 2D right now definitely has much more freedom.

Gabby Capili: I also really prefer 2D, just because I can see which of my favorite animators animated certain sequences. I like knowing people's styles and being able to point to them on screen and recognizing who animated what.

Question: What does it mean to you to work for such a legendary studio and to be part of the Disney family?

Samantha Vilfort: For me, it's always a little surreal, because everybody kind of grew up on Disney at some level. It's in your home as a kid, and then you’re going to work and walking through those doors and seeing your name after that little logo – it’s still surreal and super-exciting for me. I just think about my work going into other households and being a part of other kids’ lives. And I feel really lucky to be able to do that as a job.

EG: For me, it feels like a continuum. I feel like we are connected to all the people who came before us. We are still struggling to do our best on these films and in our craft. We always have our heroes kind of looking over our shoulders saying, “Don't screw it up.” And we’re hoping that what we do fits into that canon of Disney films, in a new, but appropriate, way. HML: I know how much Disney films and characters shaped me as a child, and how much I loved them growing up. And it's always kind of an honor and a pleasure and a little “yay” moment when you see the next generation watching the films that I actually had a part in creating, and they're actually loving those characters.

GC: As a second-generation American kid, I was expected to become a doctor or a lawyer, but in my family we all loved Disney growing up. So when I took art as a path, as long as it was with Disney, everyone was okay with that. My whole family is going to have a watch party for Sketchbook and they're all going to try and draw all the characters together.

MH: We often talk about legacy around here, and it means something to be included in that heritage – to know that my entire adult life, as an artist, as a professional, has been here doing what I love to do, what we all love to do. It's a great feeling to know that we've been a part of it, and the series touches on that in a lot of ways.

JK: I didn't realize how much I loved working here until I left for two years to go back to Korea. I missed these people so badly, and I was just really dying to come back. It's like family. Sometimes we argue and we don’t always like each other, but still you're family. Question: It often seems like there’s some confusion among audiences about the role of computers and automation in the production of CG animated shows. Can you talk a little about how much drawing is actually involved in the process?

EG: I think a common misconception is that, with hand-drawn, you have to make thousands and thousands of drawings, whereas in CG, the computer does it for you. It’s the idea that hand-drawn is the way we used to do it, and CG is the new way – you just push a button. And obviously it's a very simplistic view of what we do and, as you say, when you investigate, you realize just how many drawings go into both forms of the process.

SV: I think people sometimes have a lot of nostalgia for the 2D world that we love, but it's the same amount of hard work. For example, someone has to stitch all of the digital embroidery on Mirabel's dress, it’s someone's job to work on her hair. Or even the way the wind moves through the trees around her. That is someone's whole world for a year or more. But, just in terms of drawing, we board the entire movie seven, eight times. We draw every beat of the movie over and over and over, and then throw out the drawings immediately for the next screening. So, by the time the movie comes out, like 14 of us have drawn the movie by hand. Not in the same 2D way, where it's every frame, but there is a lot of drawing in that way. MH: The myth is that the computer world is faster and cheaper, and the first thing I tell people is, no, that's just not the case. Whether or not the movie eventually goes through a digital process and a computer puts it together, it's still artists behind the scenes making artistic choices, and a lot of that involves drawing and painting still.

HML: At the end of the day, even if we’re dealing with three-dimensional models in a computer, we always see it as a drawing. We're always paying attention to the silhouettes for the poses on every single frame. So I don't think the drawing aspect really ever goes away…

JK: I get a lot of questions about becoming a CG animator. People say to me, “Oh, I cannot draw, but can I be a CG animator?” Technically, maybe. But I think 99% of all CG animators working at Disney know how to draw. Drawing is the basic the skill they need to be an animator.

Taking an Old-School VFX Approach in ‘All Quiet on the Western Front’
‘Natural Habitat Shorts’: Like ‘Ranger Rick,’ But for Adults
Framestore Sets Sail on ‘1899’ with New Virtual Production Tools
Animated Characters: The Art of Babbitt – Part 1
Bruce Smith and Ralph Farquhar Talk ‘The Proud Family: Louder and Prouder’ Season 2
VFX is the ‘Thing’ for Tom Turnbull on Tim Burton’s ‘Wednesday’
We Need to Chat
F is for Flake: The (Not So) Great Animation Robbery?
END_OF_DOCUMENT_TOKEN_TO_BE_REPLACED