Charles Addams’s iconic, subversively comedic family is back in MGM’s new animated feature, from the creative duo that brought us the raunchy, R-Rated romp, ‘Sausage Party.’ 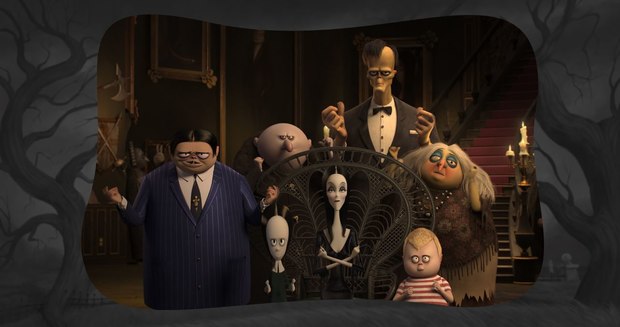 One of the world’s most original and humorously droll set of comedic characters invades our local cinemas today, as MGM’s animated comedy, The Addams Family, hits theatres across the U.S. Let the finger snapping begin! As we recall the catchy 60s TV show theme song -  “They’re creepy and they’re kooky, mysterious and spooky, they’re altogether ooky, the Addams Family” -  this collection of monstrous but quintessentially “normal” oddballs returns to the big screen, this time as a CG animated feature film directed by Conrad Vernon and Greg Tiernan, the duo behind the raunchy, 2016 R-Rated animated hit, Sausage Party.

The Addams Family is a satirical inversion of the ideal American family: an eccentric, wealthy clan who delight in the macabre and are unaware that people find them bizarre or frightening. They originally appeared as an unrelated group of 150 single panel cartoons by Charles Addams, about half of which were originally published in The New Yorker between their 1938 debut and the author’s 1988 death. They have since been adapted to other media, including the well-known television series, several live-action films, and most recently, a Broadway musical.

AWN recently spoke to the directors, who shared their thoughts on the challenges, and fun, of adapting Addams’ famous characters for a fully animated feature designed to entertain an entirely new audience. Dan Sarto: As a little kid, I remember watching The Addams Family on our black and white TV. I've always been a fan. What was your strategy when taking on an animated feature based on such a storied and visually iconic property?

Conrad Vernon: Well, when we first started this whole process, admittedly I was thinking to myself, "This has been done well many times. What can we do to make this version stand out on its own and be unique?" And ironically, the first thing I thought of was, "Well, let's go back to the original source material," which has not really been used to full effect in any version that I had ever seen.

So, we went back to Charles Addams and really looked at the way he envisioned the characters in the first place. Our character designer, Craig Kellman, took that as a jumping off point, paying homage to the “Charles Addams” style.

Then, our production designer Patricia Atchison came in and did a couple pieces for us on spec because she loves the property as well and really wanted to work on the film. She took old Chaz Addams cartoons and did beautiful black and white renderings of what they’d look like as a live-action set. And we just fell in love with them. So, it was the effort and passion of many really good artists paying homage to Charles Addams that put us in the right direction. At the time, we didn't know if we got it right or not, but we knew we liked it and wanted to go that way. Greg Tiernan: Well, as Conrad mentioned, as soon as we saw Patricia’s rendering, we knew we had what we needed right there. We could see we're in the Addams’s house; we're in their world already. And she very quickly did such an amazing job of taking that 2D cartoon world and visualizing it in 3D. That became the solid foundation we built upon. And the stereoscopic 3-D version of the movie is just incredible. You really feel like you’re living and walking around inside that iconic house. Neither of us have been huge fans of stereoscopic just for stereoscopic sake. But, when we saw the first few sequences in 3-D, it blew us away.

DS: The property dates back to Addams’s original 1930s comic strips. Though there have been film and TV adaptations since then, it’s been over 25 years since the popular movies starring Raul Julia and Angelica Houston were in theatres. You've got to adapt this property and appease contemporary audiences, many who've never seen any versions before. How did you update the characters for today’s audiences while preserving the main elements that have made this such an popular property?

CV: What’s nice about this particular family, what Charles Addams originally did, was make their core just outside the norm. And so, in every version, including ours, you had that going for you, where you didn’t really have to update the Addamses. It’s always been about how the Addamses view our world.

When we started, we wanted to make sure we correctly got the Addams’s characterization and humor, because it’s not easy to understand Charles Addams’s sense of humor when you're doing these movies. It’s not easy creating the world outside of the Addamses and watching them react to it. Those were big challenges.

We had discussions on, “Do they watch TV? Do they have cell phones? Do they have computers?” And we just said, “No, I think live in their own world.” The only person that has a computer is Thing; he's the only technologically advanced one in the family.

GT: He has a smartwatch as well.

CV: We also have an old 1920s TV that Lurch watches while he's doing dishes. But that's all the technology and outside world that ever comes in. We approached it as, “How would the Addamses view the outside world, and how would our world view the Addamses right now?” DS: I’m sure you had quite a bit of fun riffing on humorous interactions between the various characters and the outside world.

GT: The Addamses themselves gave us a gift; they're not fazed by anything that happens in the outside world. They may be intrigued by things; things might not be for them. But, the Addamses are perfectly comfortable in their own skins. Going all the way back to the original Charles Addams cartoons, the humor has always been more how “normal society” views and interprets the family, rather than the other way around.

Of course, there's a myriad of things we could have done. Take even simple stuff, like how Wednesday Addams has never seen a cell phone. Everyone these days, including kids, lives on their cell phones or other digital devices. So, we had fun with that for sure. But most of it goes back to the classic humor of other people's reactions to the Addamses, rather than the other way around.

CV: I would say, though, that the Addams Family misinterprets things…

CV: ...and that's another source of humor, where Wednesday thinks a cell phone is some sort of soul trapping magic mirror. So, it's the back and forth. But what I liked most about the Addamses is that they're the non-judgmental ones. They're the ones that are open minded. So, strangely enough, we aspire to be more like them; more open minded, more Okay with everything, less judgmental. It's the world that views them as something that's gone wrong. DS: How was the production handled? The animation was done at Cinesite Vancouver.  Were you guys planted there? Where was your base of operations and how did you split up the work?

GT: Well, I was in Vancouver anyway. Cinesite had purchased my company, Nitrogen Studios, so we were already in Vancouver. Most of the crew at Cinesite was already in place, and a lot of them had worked on Sausage Party. Conrad and I made that movie, of course, so for this one, we pretty much just picked up where we left off. The crew up in Vancouver did an absolutely amazing job. Again, who wouldn't love the opportunity to work on The Addams Family?

As directing partners, Conrad and I have always been super compatible. We each know what the other one is thinking, what the other likes and dislikes from a creative perspective. Conrad worked with a small edit crew down in Los Angeles while the main crew worked with me up in Vancouver. We had another edit team in Vancouver as well. Surprisingly, things went smoothly; it was a great production.

CV: We had our test run on Sausage Party; on The Addams Family, we did pretty much the same thing. We also had the added benefit of office space, a small crew and the editorial team down in L.A. as well. So, we had even more resources to put towards the film. DS: What were your biggest challenges on the film?

CV: The biggest challenges were finding the right tone and making sure that we successfully walked that very thin tightrope of introducing the Addamses to a new audience while satisfying existing fans of all ages. Making sure we captured some nostalgia for people who loved the 90s movies, who loved the TV show, and who may have been around long enough to have loved the original cartoons.

That was a really, really tough line to walk, because you want to make sure you don't go over anyone's head, but at the same time, you want people to remember something about the Addamses from their childhood. The sense of humor is pretty difficult to nail unless you're a true Addams Family fan. You know it's not gross out humor; it's not monsters. The film’s sensibility exists in this very specific, weird niche. For me at least, that was probably the biggest challenge, but a fun one nonetheless.

DS: So, all said and done, is The Addams Family the film you set out to make? You hoped to make?

GT: For the most part, yeah. In any movie, you start with an idea in your head of what you want to do and where you want the story to go. For the most part, it's a plus if you can get 90% of that onto the screen. There are always compromises here and there that you have to make for various reasons.

CV: At a certain point the film starts telling you what it needs to be.

GT: It creates its own legs.

CV: You begin with this grand idea in your head and you start going down that path. Then the film starts saying, "This half of your grand idea, it ain't gonna work anymore." So, you throw it out, and from then on, you're just holding the reins, so to speak, trying to drive it home as best as you can. Are there certain things that I miss? Yeah, sure. But that doesn't mean they belong in the movie. So, like Greg said, for the most part, I'm happy with the film. I’m quite proud of it.

GT: There are always things that will hit the cutting room floor. But we’re both very happy with the final cut of the movie. Taking an Old-School VFX Approach in ‘All Quiet on the Western Front’
‘Natural Habitat Shorts’: Like ‘Ranger Rick,’ But for Adults
Framestore Sets Sail on ‘1899’ with New Virtual Production Tools
Animated Characters: The Art of Babbitt – Part 1
Bruce Smith and Ralph Farquhar Talk ‘The Proud Family: Louder and Prouder’ Season 2
VFX is the ‘Thing’ for Tom Turnbull on Tim Burton’s ‘Wednesday’
We Need to Chat
F is for Flake: The (Not So) Great Animation Robbery?
END_OF_DOCUMENT_TOKEN_TO_BE_REPLACED