Creators John Hodgman and David Rees spill the beans about their adult animated sitcom, whose second season is now streaming on FX and Hulu. 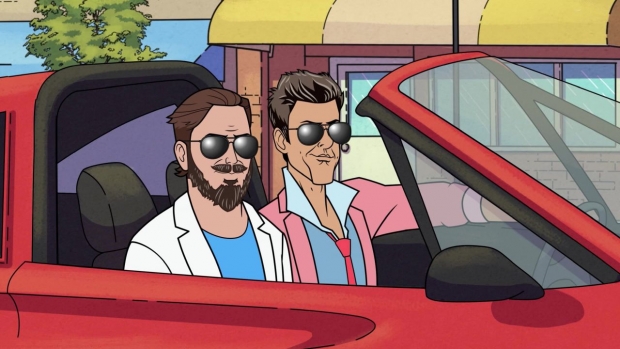 Since its premiere in July 2020 as part of FXX's anthology series Cake, Dicktown has done for the fictional North Carolina town of Richardsville… oh, probably what any series has done for the fictional town in which it’s set. More to the point, the adult animated sitcom created, written, and directed by – as well as starring – John Hodgman and David Rees reminds us once again that (1) some people never grow up, and (2) this can be extraordinarily funny (when it’s not unbearably sad).

In Dicktown, Hodgman plays John Hunchman, a famous boy detective who, unfortunately, is no longer a boy. In fact, he’s a 40-year-old man, and, while he still pursues his calling as a detective, he only solves crimes for teenagers. Accompanied by his partner, David Purefoy (Rees), who used to be his archenemy in high school and, like the superannuated shamus, never quite grew up, John takes on a different client and solves a different implausible mystery in each episode.

In the second season of Dicktown, which premiered on FXX on March 3, and marks its debut as a standalone series, John and David once again have their hands full, from chasing down stolen pimento cheese recipes, to bringing a rogue high school mascot to heel. Along the way, they also keep trying, with limited success, to solve the biggest mystery of all: how to grow up.

We spoke with Hodgman and Rees about the new season and their new format, and about what it takes to keep it all fresh and funny. AWN: Has the new format given you opportunities to develop the series in new ways?

David Rees: Having the show stand on its own allows us to be more ambitious in the storytelling. Both John Hunchman and David Purefoy have individual stories and challenges that they try to deal with over the course of the season.

John Hodgson: Right. Last season, Hunchman was still solving dumb mysteries for local teens, while David was living in his parents’ basement and driving Hunchman around for pocket change. By Season 2, they realize this is no way to live. But as they each try to move forward in their lives, a mysterious figure from their past comes back for revenge. That’s a long arc that we’d never have been able to really pay off in the old format.

AWN: Were you able to move into production on the new season soon enough to take advantage of your existing pipeline and team of artists?

JH: We were lucky that Floyd County, our studio, happens to be amazing. While a number of artists moved on to other gigs since Season 1, there has always been continuity among [Executive Producer] Matt Thompson, [Director] Todd Redner, and [Producer] Eric Sims. And they are always attracting new talent, who bring new visual energy to the show that we could never have imagined.

DR: I think there was about a year between finishing Season 1 and starting Season 2. Despite that lag – and despite the pandemic – we were happy with how smoothly everyone got up to speed on making Season 2. AWN: Where will you be taking your viewers in the new season and how will it riff on or otherwise expand upon Season 1?

JH: We flash back a lot more to John’s career as a boy detective, as he tries to figure out why this mysterious enemy is out to get him. We also get to see his Mind Palace – the imaginary mansion in his mind where he stores all his memories.

DR: We also go deeper into David and his own weird insecurities – as well as deeper into the local Fried Pork Anus Snack factory, where he gets a job.

JH: David sings an incredible Johnny Cash-style song about boxing fried pork anuses – one of many original musical numbers he contributed this year. In general, the whole Dicktown universe is bigger, stranger, even psychedelic.

AWN: What did you learn making the first episodes that helped you on the new season?

JH: We were animation neophytes going in, so last season we were often requesting big changes on blocking and backgrounds long after those things were supposed to be locked. I hope we were a lot less frustrating to Floyd County this time.

DR: We also learned the importance of leaving space for improv in dialogue, how to create scenes that are visually dynamic without being logistically impossible, and all the subtle facial expressions that can be captured by animators. AWN: Where did you draw inspiration for the characters, premise, and stories for the show?

JH: I had been reading a lot of Encyclopedia Brown stories [about a boy detective] to my son at the time, and found myself thinking, “man, this kid peaked early.” I never understood why Bugs Meany – the frequent villain of the stories – always confessed to the crime rather than just shoving this annoying know-it-all in the dirt.

DR: Dicktown is partially inspired by my hometown of Chapel Hill, North Carolina. I think the characters we play on the show are exaggerated versions of ourselves. We come up with the stories by sitting around in our favorite diner (not quite the Lunch Hut from the show, but close) and pitching each other ideas.

AWN: What inspired the show’s character designs and overall look and feel?

JH: Scooby-Doo was a big touchstone. All those Saturday morning cartoons about young people solving mysteries with their talking dog companion, or talking shark companion, or unfrozen caveman companion. John and David should get a talking animal or something if we get a Season 3. Maybe the ghost of The Smoking Baby, Richardsville High School’s sports mascot that gets canceled for being an infant who smokes cigarettes.

DR: I think we also used the old, animated Star Trek as a reference. We didn’t want the characters to look over-the-top “cartoony." AWN: How is the show animated?

JH:  I guess by magic? David knows more, I think.

DR: I think Floyd County uses Photoshop for the backgrounds, Toon Boom Harmony for animation, and Premiere for editing. Edits are uploaded to frame.io, so John and I can give notes.

AWN: How much of the show’s humor is fully developed at the board stage, versus coming together once you’re into animation? Were there instances where the animators made it funnier than you imagined?

JH: David and I laughed so hard every time John slipped and fell on a smear of pimento cheese in the first Season 2 episode. The animators really killed at all the physical comedy. We wrote a script set in “Mammal Island” – our version of the Nintendo game Animal Crossing – and they came up with a whole new visual world that’s simply mind blowing. As is the final hallucination sequence when all the characters take a bunch of hallucinogenic drugs to enter John’s Mind Palace. Spoiler. DR: This happened a lot. The animators brought a lot of funny physicality and expressive body language to the characters – stuff we didn’t think to put on the page. It really takes everything to a higher level. But it wasn’t just comedy stuff, they also improved our show on the serious/emotional side. We could ask for really subtle facial expressions and they could pull it off.

AWN: What have been the biggest challenges on the show?

JH: We had one year to write and animate the season between first being told we were picked up and the March 3 premiere. We had some long days, but it’s hard to complain when you’re making a cartoon with your friends and the support of a studio and network.